Throwback Thursday: “…The Screaming Of The Lambs”

Fun time again with some memorable movie lines that span quite a few decades. Enjoy! This post first ran in 2014.

“You still wake up sometimes, don’t you? You wake up in the dark and hear the screaming of the lambs.” Hannibal Lecter (Anthony Hopkins) has many notable lines in the 1991 Academy Award winner, The Silence of the Lambs.

“Major Strasser has been shot… round up the usual suspects.” Captain Renault (Claude Rains) issues this casual order in the 1942 classic, Casablanca. 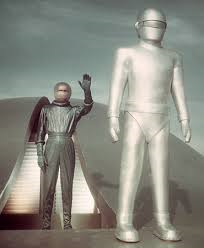 “Gort! Klaatu barada nikto!” Helen Benson (Patricia Neal) commands a pre-programmed robot from outer space to stand down and not destroy the Earth in the 1951 science fiction classic, The Day the Earth Stood Still. (This movie is sixty-seven years old? Gawd!)

“Hate makes you impotent, love makes you crazy, somewhere in the middle you can survive.” Larry (Billy Crystal) offers some sage advice in the 1987 comedy, Throw Momma from the Train.

“I came across time for you, Sarah. I love you. I always have.” Kyle Reese (Michael Biehn) to Sarah Connor (Linda Hamilton) during one of the (few) tender moments in 1984’s The Terminator. (Wait, Mike, you’re not quoting an Arnold line?!)

“Can you think of a plan that doesn’t involve your ten-year-old sister joining the army?” Ray Ferrier (Tom Cruise) to his son in the 2005 remake of War of the Worlds. (I don’t care how old the 1953 version is; the sound of those death rays still creeps me out!) 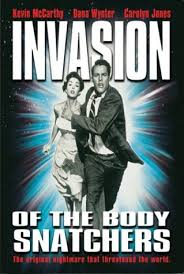 “They’re here already! You’re next! You’re next, You’re next…!” A rather disturbed Dr. Miles Bennell (Kevin McCarthy) tries to warn the world of imminent invasion in one of my all-time favorite flicks from 1956, Invasion of the Body Snatchers. (See my post, “They’re Here Already!”)

“A boy’s best friend is his mother.” Just about every line from Norman Bates (Anthony Perkins) in the 1960 Hitchcock classic, Psycho, is quotable. (See my post, “Psycho Memories.”)

“Whoa. Wait a minute, Doc. Are you trying to tell me that my mother has got the hots for me?” Marty McFly (Michael J. Fox) to Dr. Emmett Brown (Christopher Lloyd) in 1985’s Back to the Future. 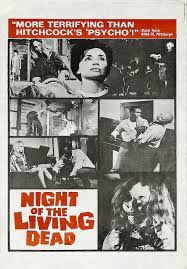 “It has been established that persons who have recently died have been returning to life and committing acts of murder. A widespread investigation of funeral homes, morgues, and hospitals has concluded that the unburied dead have been returning to life and seeking human victims. It’s hard for us here to be reporting this to you, but it does seem to be a fact.” A TV newscaster renders this chilling report in the 1968 groundbreaking horror film, Night of the Living Dead.

Lines such as these are what make watching movies so much fun. You’re always welcome to share some of yours.