In this post from 2012 I talk about one of the scariest movies ever, and why I didn’t take a shower for quite some time.

Until Field of Dreams hit the screen in 1989, my number one favorite movie was Alfred Hitchcock’s classic horror flick, Psycho. That was a long run of twenty-nine years, Psycho having been released in 1960. A lot of great movies over the last two-plus decades have pushed it farther down the list, as did an odd encounter with the author of the original novel. More on that shortly. Even so, Psycho remains safely in the top thirty to fifty movies that I include in my Top Ten of all time. 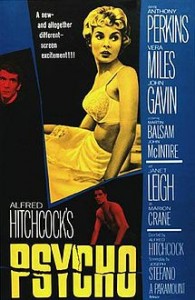 A spoiler alert: I can’t imagine anyone not knowing the “punch line” of Psycho, but just in case, you may want to skip this paragraph. The story: a young woman named Marion Crane (Janet Leigh) steals a bunch of money and drives to a small town to help out Sam (John Gavin), her boyfriend. Tired, and with rain pouring down, she checks into the seedy Bates Motel, run by Norman Bates (Anthony Perkins) and his mother. They are, of course, one in the same, Norman having killed his mother, exhumed her body, stuffed her and assumed her personality (and her wardrobe). Mother kills Marion in the famous shower scene, then a detective sent by Marion’s sister Lila (Vera Miles), before the denouement in the fruit cellar, where Lila finds the stuffed mom and Sam subdues Norman and tears his wig off. The final few frames, with Norman/Mother in the jail cell refusing to harm a fly on his hand, are classic. Look for the fade shot with ol’ Norm’s smiling face becoming skeletal for an instant.

I mentioned this in a previous post, that I saw Psycho when it was new, and I was a kid (No “R” rating back then). In 1960 I spent the summer, as usual, in Far Rockaway, NY. We had a whole theater full of kids, and I don’t think two minutes of the film went by that we weren’t screaming our heads off. And the shower scene? That sent some of the girls out of the theater. As a horror fanatic, I loved it—109 memorable minutes in a movie house. So what if the “blood” oozing down the shower drain was chocolate syrup? Or that Anthony Perkins wasn’t even on the set that day, when they filmed the scene with a stand-in. Heck, the whole movie was shot on an $800K budget, but Hitchcock, genius that he was, did a great job with his actors, as well as the taut screenplay by Joseph Stefano. The creepy musical score by Bernard Herrmann didn’t hurt either. (Admit it now: at some time of your lives you’ve all done the stabbing motion and vocalized, “Eeee eee eee eee.”) 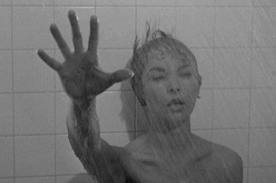 Anyway, we kids talked about Psycho all the rest of that summer. And most of us refused to take showers. My family rented a couple of small rooms in an old manor house, and the showers were in—oh no, the basement! No way would I go down there. Just the overall experience alone kept Psycho on the top of my list for nearly three decades.

The author of Psycho, Robert Bloch, published his short novel in 1959. He sold the screen rights for a pittance and had no particular involvement with the film, though he retained his rights to the character of Norman Bates in anticipation of sequels. The film stays reasonably true to the novel, though as with most books there is a good deal more detail and backstory. Norman is an overweight guy, not at all like Anthony Perkins, and the story opens in his POV with the first of a number of “conversations” between him and his mother. For its time, the split personality denouement proved quite a shocker. 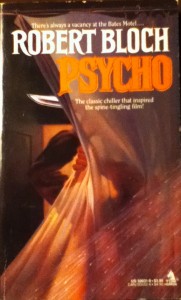 Norman Bates is modeled, in part, after a real-life rural Wisconsin nutcase named Ed Gein. This guy dug up corpses from cemeteries and stuffed various body parts to decorate his home. He also killed a number of women. It is believed that Gein also served as a model for the killer in The Texas Chainsaw Massacre and for Thomas Harris’s Buffalo Bill murderer in Silence of the Lambs.

Subsequently, Bloch wrote a script for Psycho II, based on his novel, but the studio turned it down. The movie, Psycho II, came out in 1983 and also starred Anthony Perkins and Vera Miles. Perkins starred in two other less-than-memorable sequels before his death in 1992 at age sixty.

But Bloch held on steadfastly to Norman Bates, which leads me to this story. In the early ’90s, having published Demon Shadows and The Well (now The Modoc Well) with Bantam, I was invited to a Halloween book signing event with many other horror writers at a bookstore in L.A. Robert Bloch, now well along in his seventies and not in the best of health (he would pass not long after), was among the presenters, which excited me, given my love of Psycho and my collection of many of his books, which he graciously signed. 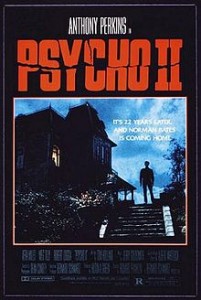 I also told him about my satirical science fiction series, the first of which, Bicycling Through Space and Time, would be published a couple of months later. I had just finished writing the second book, The Ultimate Bike Path, in which my character, Jack Miller, rides into a world of old horror movies, an absolute hoot for me to write. As an homage to my once-favorite movie, I had Jack running into Norman Bates and knowingly but unwillingly becoming the Janet Leigh character, shower scene and everything. I told this to Bloch, and he got a big chuckle out of it. I got his address, told him that I’d send him a copy of the first book, and we left it at that.

After Bicycling Through Space and Time was published I sent him a copy. He wrote back, thanking me, but also added that if the second book with the Psycho scene was published I could risk getting sued, along with my publisher, Berkley, since Norman was still his character. This floored me; I’d only done the scene to honor the story. The book was in the proofing stage, and my editor said not to worry about it—until she checked with his agent and was basically told the same thing. We pulled the chapter, and I hastily wrote a new one for The Ultimate Bike Path. Bummer.

Anyway, my Psycho memories are mostly good ones and will always remain among my favorite movies. One last thing: I would be remiss if I did not mention that a remake of Psycho came out in 1998. It had a solid cast: Vince Vaughn, Anne Heche, Viggo Mortensen, and Julianne Moore. But the burning question, asked by many, was—WHY? Other than it being in color, with different performers, it is the same script, practically verbatim, and matches the original nearly frame by frame. It did not do well; how do you improve upon a classic?