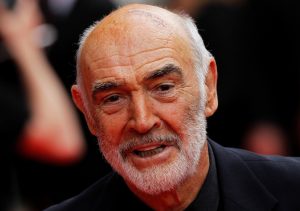 Just like the many larger-than-life characters that he played on the silver screen, Sean Connery toughed it out for ninety years on this plane of existence before succumbing on Halloween. I count many of his films among my favorites and have previously written about some of them. The one I’ve chosen for this post as an homage is the lesser-known 1981 science fiction “space western,” Outland.

Connery, of course, is renowned as the first James Bond in the long-running series begun by Eon Productions. The many obituaries and articles about his life that I read in the past week focused on his roles as 007, as well as some of his post-Bond successes. These included Robin and Marian (with Audrey Hepburn), The Man who Would be King, his Academy Award performance in The Untouchables, the excellent Finding Forrester, and The Rock, to name just a few. His last on-screen role before retirement, The League of Extraordinary Gentlemen, was also mentioned. All great selections; but no one said much about Outland. Let’s rectify that. 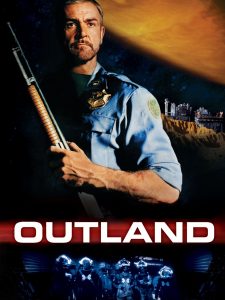 EVEN IN SPACE, THE ULTIMATE ENEMY IS MAN

With that tagline (one of a few), here is a brief overview of Outland. Connery plays Federal Marshal William O’Niel in a world of the future, where mining colonies exist on different planets and their moons. His latest one-year tour of duty puts him on Io (EYE-oh), a moon of Jupiter—a bleak, miserable outpost that happens to be rich in titanium. After one week his wife is so disgusted that she takes their son to a space station pending a return to Earth. She tells her hubby, via a message, that she’ll wait for him there if he wants to go back with them.

But this dedicated lawman cannot leave Io, because he has come to learn why this outpost has become the company’s most productive commodity, and he is resolved to do something about it. The corrupt general manager, Mark Sheppard (Peter Boyle; yeah, the Monster in Young Frankenstein), provides the miners with a powerful drug that enables them to work longer and harder. One problem, though: many of them burn out after ten months and turn psychotic. We see some gross examples of that early on. They ain’t pretty.

“DO NOT FORSAKE ME OH MY DARLING” 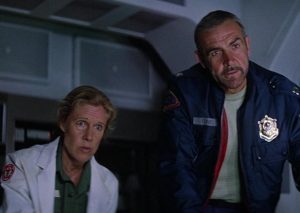 Dr. Lazarus is O’Niel’s only ally.

Remember that song from the old classic western, High Noon? That’s where the “space western” designation comes in, because Outland has often been referred to as, “High Noon in Space.” After Sheppard tries unsuccessfully to have O’Niel murdered, he asks his bosses to send a couple of professional killers to do the deed. Just as Gary Cooper prepared to face the killers arriving on the noon train, O’Niel must make ready for the killers who will show up on a shuttle from the space station in a few days. Just as Cooper’s Will Kane character is on his own, spurned by both the townspeople and his own deputies, O’Niel’s only ally—at the last minute—is Dr. Marian Lazarus (an excellent Frances Sternhagen), the outpost’s sawbones. And one of his own deputies is in Sheppard’s pockets, making the task even more difficult.

Much of the later tension in the film is derived from the constant countdown of the shuttle’s scheduled arrival on display boards all over the outpost, as well as O’Niel’s efforts to prepare for the inevitable “gunfight.” A strong Jerry Goldsmith score adds to the suspense. Though far from his most well-known roles, Connery’s performance in Outland as a man torn between duty and family is powerful. If you’ve never seen it, or haven’t for a long time, I’d suggest giving it a try.

O’Niel is ready for the killers.

R.I.P. Sir Sean Connery. Okay, I’ll succumb to the obvious and say, “Wherever you’ve gone to, I hope the martinis are shaken, not stirred.”