Sean Connery’s final on-screen movie is one of my favorites. Doubtless, I stand alone…but when did that ever stop me?

Actually, I could have launched a new series with this 2003 fantasy: “Films About Literary Characters.” There sure as heck are enough of them in the story. But The League Of Extraordinary Gentlemen, starring Sean Connery as Allan Quatermain in his last on-screen role before retiring, qualifies as a Guilty Pleasure by virtue of the many critics and filmgoers that hated it (not me, of course), if not for its box office take, which was quite good.

AN ADVENTURE IN A LEAGUE OF ITS OWN 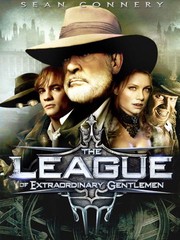 With that tagline and no spoiler alert (and with the creator of each character in parentheses), here is the story, “loosely” based on a comic book series. In 1899 a gang of what appears to be Germans crack the Bank of England using weapons that are well ahead of their time. Soon after that, the same gang—now wearing British uniforms and speaking English—use other advanced weaponry to destroy a German factory and kidnap a group of scientists. Tensions arise between the two countries, putting them on the brink of war.

In Africa, a British intelligence man approaches adventurer Allan Quatermain (H. Rider Haggard), who is now retired and has no interest in helping the Empire. But after a bunch of bad guys try to assassinate him, Quatermain heads for London. There, he meets “M” (Ian Fleming), head of the intelligence service, who tells him that a deranged genius known only as the “Fantom” (Gaston Leroux) is responsible for the two incidents and is now planning to attack the city of Venice, where world leaders are gathering for a meeting. The Fantom (their spelling) must be stopped in order to avert a world war. 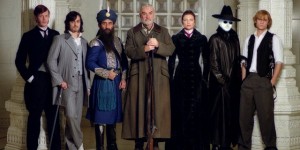 Quatermain has been chosen to head a unique team, to be known as the “League of Extraordinary Gentlemen,” and one by one he meets the others: vampire Mina Harker (Bram Stoker); Captain Nemo (Jules Verne); Rodney Skinner, an Invisible Man (H.G. Wells); and the immortal Dorian Gray (Oscar Wilde). While recruiting Gray the team is attacked by the Fantom and his men. They are aided by American Secret Service agent Tom Sawyer (Mark Twain), who helps drive the bad guys off. The reluctant Gray, who once carried a torch for Mina, joins the League, and off they go to Paris for the final member, Dr. Henry Jekyll/Edward Hyde (Robert Louis Stevenson). They capture the latter, who soon transforms into the former.

WHO ARE THE BAD GUYS?

Aboard Captain Nemo’s submarine, the Nautilus, the League races to Venice and manages to save at least half of the city, and the world leaders, from annihilation. Quatermain confronts the Fantom, who reveals himself to be “M”, which is short for Moriarty—as in Professor James Moriarty (Sir Arthur Conan Doyle), Sherlock Holmes’s nemesis. Moriarty manages to escape, and when the group joins up they realize that Skinner has disappeared (no pun intended). They had suspected that one of their number was a traitor, and this appears to confirm it. 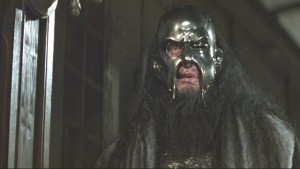 The Fantom, aka “M” and Prof. James Moriarty.

Wrong-o. Gray returns to the Nautilus, attempts to kill Nemo’s first mate, Ishmael (Herman Melville), steals the sub’s exploration pod and sets off with Moriarty for parts unknown. Before he dies, Ishmael tells the League about Gray’s duplicity. (Gray’s motivation: Moriarty has the painting of Gray that continues to age as he remains young, and Gray wants it back.) Skinner, still a good guy, has snuck aboard the pod and is using Morse code to keep the others informed.

A MAN WITH A (PSYCHO) PLAN

Moriarty has left a phonograph record behind in which he details his dastardly plan. Gray has gathered samples for him of physical elements from most of the League and is having the German scientists develop formulas that will create superhuman armies. He will, of course, sell these formulas to the highest bidders. Moriarty also reveals that there are bombs on board the Nautilus. They explode, but Jekyll transforms into Hyde and saves the day, proving that the Beast can work for the good of the League. 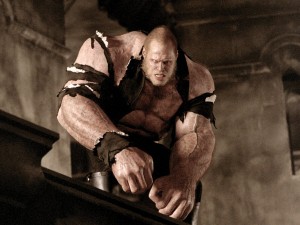 Still able to receive Skinner’s messages, the Nautilus sails up a river in Mongolia to a remote, snowy mountain range. Once again reunited with the Invisible Man, the League comes across an enormous factory hidden away from the world. Here, in addition to the captive German scientists working on their formulas, Moriarty is building even more advanced weapons, as well as destructive versions of Nemo’s submarine. Oh yeah, this guy is completely whacko—in a free enterprise sort of way.

So now the League—including Mr. Hyde, who is still managing to focus his anger at the bad guys—joins together is one final “Go fight win!” moment before splitting up to see about stopping Moriarty and his minions. Superhuman or not, they know that they’ve got one hell of a task ahead of them.

I’ll stop here. A lot goes on inside that factory of horrors, and I won’t ruin it for you. I understand that Sean Connery was a bear to work with during the filming of this story. Maybe that’s when he knew it was time to hang ’em up. But he always was a professional—and one of my favorites—and his issues did not reveal themselves in his portrayal of Allan Quatermain. The League of Extraordinary Gentlemen will always be on my once-a-year viewing list.