Myths And Legends: The Ghosts Of Bachelor’s Grove Cemetery 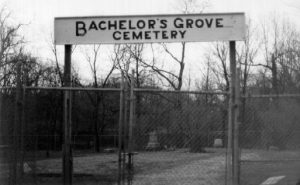 One of the most haunted places in the U.S. is located in suburban Chicago, of all places. The Bachelor’s Grove Cemetery, abandoned over four decades ago, is surrounded by the Midlothian Forest, which sounds more apropos to Middle Earth rather than Middle America. As creepy sites go, this one has it all.

The first settlers on the land engulfing the cemetery, folks originally from Great Britain, were homesteaders relocating from New England in the 1830s. The cemetery, which took on its first permanent residents a few years later, contained just over eighty plots, quite a few of which were never used. But that didn’t stop Chicago’s gangland bosses, among them Al Capone, from depositing their victims on the grounds or in the nearby pond during the 1920s and ’30s. 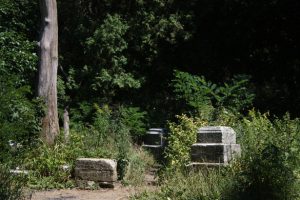 The Bachelor’s Grove Cemetery was abandoned in the 1960s or early ’70s, and it was then, as well as the 1980s, that the greatest number of paranormal events occurred (although there were earlier ones). Some believe this had to do with asshole young people using the cemetery to drink and party and turn headstones over, or perform other acts of vandalism. This was the kind of stuff that could go a long way in pissing off the spirits that had been laid to their eternal rest. (Hmm, didn’t I write about something like that in The Burning Ground?) Seems like the disturbed dead decided to do something about it.

Two general manifestations have been observed by many witnesses. The first has to do with orbs of light that are often seen floating above the tombstones. And the second involves near “collisions” with spectral cars on an adjoining road, called the Midlothian Turnpike. In fact, people walking around the cemetery grounds have seen—and heard—many phantom cars passing by on that same road. 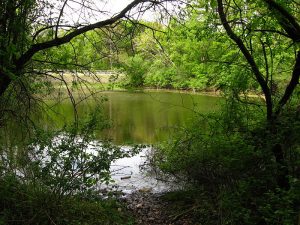 The pond near the cemetery grounds.

In the 1950s quite a few people reported seeing a spectral farmhouse that would appear to be floating above the ground. It would shimmer, and sometimes seem to shrink, before vanishing altogether.

This next one really creeps me out. Many witnesses reported seeing guys in monk’s robes wandering through the cemetery grounds. (Well, at least I know what my nightmares will be about later.)

A figure called the White Madonna has been spotted on nights when the moon is full. She walks around the grounds with a dead baby in her arms.

A farmer who might have served as a caretaker was accidently killed near the pond while plowing the earth. He is often seen close to this slough, along with—gulp!—a two-headed spirit. A dog, which fades from sight whenever anyone nears, has also been seen many times near the cemetery entrance. 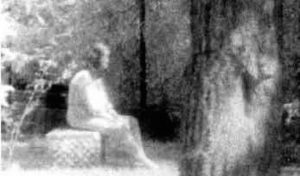 The woman on the tombstone. What do you think?

THE WOMAN ON THE TOMBSTONE

This next manifestation is either the most compelling evidence—or perhaps the greatest hoax—about Bachelor’s Grove Cemetery being haunted. In 1991 a woman visiting the cemetery with a tour group took the photo that you see here. She and a couple of relatives were the only women in the group, and they were nearby her when she took the picture. She swears that no one else was in the shot, and yet we clearly see a side view of a semi-transparent woman sitting atop a tombstone. The photo, which would run in the Chicago Sun-Times, generated a great deal of interest—and controversy—at the time.

It stands to reason that Bachelor’s Grove Cemetery has been the subject of many paranormal investigations through the decades. These studies have turned up voice phenomena, images of ectoplasm floating around with the aforementioned orbs of light, and other strange occurrences. The cemetery has been featured on the TV show, Ghost Adventures, and on a segment of the Travel Channel’s “Most Terrifying Places in America,” to name just a few. I decided not to include a link to any specific show on YouTube, given that there are so many, as you’ll see. Just enter “Bachelor’s Grove Cemetery”—and prepare to be creeped out!