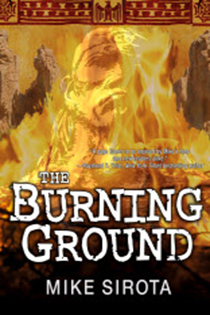 The Maidu Indians wanted no part of the white devils that came to their sacred land to hunt the shiny metal. But in 1849 Gold Rush miners in the Sierra Nevada foothills slaughter nearly all the inhabitants of the village of Kalkalya, trapping their spirits.

Preview a sample chapter of The Burning Ground

“I like my scary stories grounded in reality and this one surely is. Sirota did his research on Native Americans and the Gold Rush era. Two worlds, three actually, collide in this riveting story of vengeance. The characters are well-drawn, as well as the beautiful setting in the Sierra foothills. If you like to get your history and culture with a lot of entertainment and page-turning tension, read this book.”

“I’ve read most of Mike Sirota’s books (he’s written many, I may have missed a couple) and I’ve enjoyed all of them. And now I consider his latest, THE BURNING GROUND, to be his best to date. The characters have depth and emotion, the small town setting in the Sierras is perfect, and tension throughout grabs you by the throat in this scary, and I mean scary, ghost story. If this one doesn’t cause you to quiver in spine-chilling fright, you have no soul. Highly recommended.”