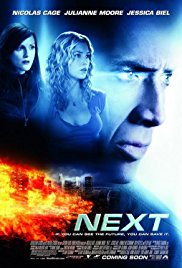 Through the years, it seems as if many of my Guilty Pleasures—films that bombed at the box office and/or with the reviewers—involve Nicolas Cage. The same is true of the 2007 sci-fi thriller, Next, based on a story by legendary author Philip K. Dick. But I like Cage, and with the exception of The Wicker Man (See my post, “Oh No, Not The Bees!”), I enjoy most all his films. And I definitely get a kick out of Next, which co-starred Julianne Moore and Jessica Biel and resonated more with us ordinary moviegoers than with the jaded reviewers. (Fie on them!)

IF YOU CAN SEE THE FUTURE, YOU CAN SAVE IT

With that tagline, and no spoiler alert, Next introduces us to Cris Johnson (Cage), a small-time Las Vegas magician with a unique ability: he can see about two minutes into the future, which enables him to supplement his income by gambling. The only exception to his limits is a scene that he sees repeatedly: he sits in a café having a drink at 8:09 when a beautiful woman appears. Believing her to be part of his future, he goes to the café every day at both 8:09 a.m. and p.m., so far unsuccessfully. 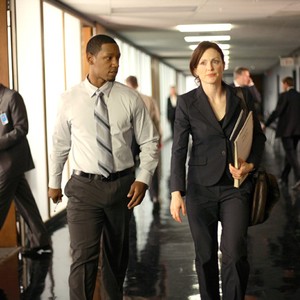 Callie Ferris is determined to bring Cris in.

FBI agent Callie Ferris (Moore) has been watching Cris. She believes that he can help her with a “small” problem: a nuclear device has been stolen by a group of terrorists, who plan to detonate it in the U.S. Callie watches as Cris stops a potential robbery and murder in a casino but is subsequently pursued by security and Las Vegas police, who do not understand what he has done. But Callie does, and she’s convinced that Cris is her man.

Cris avoids the pursuit and looks ahead to when Callie would have caught up to him, which enables him to learn what she wants. No way, he decides, and escapes before she shows up to where he had been. At the same time a couple of the terrorists, wondering about the FBI’s interest in Cris, interrogate the head of casino security, and ultimately murder him.

THE WOMAN OF HIS DREAMS

Cris is again sitting at the diner at 8:09, and this time the woman, Liz Cooper (Biel), shows up. In a scene reminiscent of Groundhog Day, Cris envisions a number of approaches to meeting her, most of which humorously fall flat. He finally hits on the right one, and they talk. Knowing that Liz is headed to Flagstaff, AZ, he charms her into giving him a ride. He wants her to get to know him—and he also needs to get outta Dodge, given all the law enforcement—and now the terrorists—that want him.

Liz is not quite sure yet if giving Cris a ride was a good idea.

After a stop at an Indian reservation, where Liz volunteers as a teacher, they continue on to Flagstaff. Cris is totally smitten by Liz, and it appears that she is warming up to him. When a rainstorm washes out a road they are forced to spend a night in a motel. Ever the gentleman, Cris sleeps in Liz’s SUV to avoid an awkward situation. She is most appreciative of this.

Callie and her staff have followed Cris to the motel, arriving the next morning. With confirmation that the nuclear device has been tracked to Los Angeles, she tells her superiors that she is going to bring him in. Some of the terrorists have also appeared near the motel, bent on killing Cris. 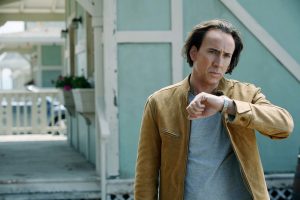 Is time running out for Cris?

By the morning Cris and Liz have gotten real close and have even wound up in bed. Afterward, a radiant Liz goes across the road to pick up some food and is confronted by Callie, who tells her that Cris is a sociopath and cannot be trusted. She asks Liz to drug him so that they can arrest him peacefully. Though confused and scared, Liz returns to the motel room with the drug in her pocket…

I’ve got to stop here, with at least half the film yet to go, because I don’t know how to explain a whole lot that follows without giving too much away. We have Liz about to drug an unsuspecting Cris, and the FBI waiting to pounce, and a terrorist sniper with a bead on the motel room door, and the other terrorists unloading the nuclear device at the Port of Los Angeles. If that isn’t enough to hold a viewer’s interest, then I don’t know what would. Sure, Next is not for everyone, but if you like your action/thrillers laced with science fiction, and if you don’t mind setting aside reality for ninety or so minutes, you’ll enjoy the ride.