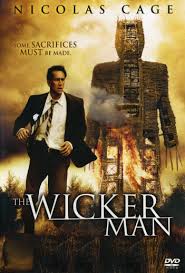 In case you don’t know, that line comes from the 2006 horror/thriller flick, The Wicker Man, a remake of a 1973 British film of the same name. I could have just as easily gone with the title, “Oh no, not this movie!” and been spot-on. Both critically and at the box office, it was a disaster. And while that double whammy may qualify it as a Guilty Pleasure, I did not present it as such. Unless you’re into a good deal of unintentional laughs, this one is no pleasure to watch.

The film hardly lacked for star power. We’re talking Nicolas Cage, who happens to be one of my favorites, and Ellen Burstyn. These are both Academy Award winners. I sometimes wonder why good—even great—actors take roles in movies like this. Surely they read the script beforehand. I suppose it has to do with the next paycheck—but what do I know?

SOME SACRIFICES MUST BE MADE

With that tagline, the film opens with motorcycle officer Edward Malus (Cage) involved in a horrific traffic accident, one in which the victims somehow disappeared. Huh? That scene is never explained, an ongoing issue throughout. While recovering, Malus receives a letter from a long-ago former fiancé, Willow (no, not the little guy). Seems she’s since had a daughter, named Rowan, and now Rowan is missing, and would Malus help her? Like a real shmuck—Willow had walked out on him—he agrees. 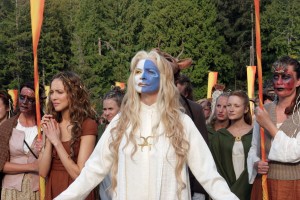 Which NFL team is Sister Summersisle rooting for?

Malus travels to an isolated Puget Sound island called Summersisle, where Willow—now Sister Willow—resides. A colony of pagans, nearly all women, worships the Goddess through her intermediary, Sister Summersisle (Burstyn), who leads this bunch of whack jobs. The few men there are like slaves, meek and subservient. Besides physical labor, they are used for breeding. The colony lives off the land, as well as the profits from their production of honey. There are huge beehives all over the place.

COME OUT, COME OUT…

Aside from Sister Willow, everyone on the island goes out of their way to treat Malus like shit. Meeting with him secretly, Willow swears that Rowan is still alive and somewhere on the island. Ever the cop, Malus undertakes a thorough investigation. Some of the film’s early unintentional humor has him riding an old, rickety girls’ bicycle around the rural island in a suit and tie. The women at first deny that Rowan ever existed, but after Malus finds her name in the school’s attendance book, the teacher, Sister Rose—she has a twin named Sister Thorn; I kid you not—first says, “She’ll burn to death,” then corrects herself and adds, “She burned to death.” 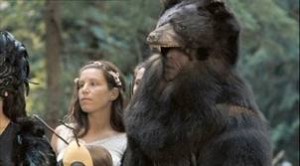 How could Nicolas Cage bear to do this scene?

Malus starts putting two and two together: the colony had a bad crop the previous year, and now they have a ritual coming up to appease the Goddess and have a better harvest. What the hey, are they going to sacrifice Rowan—who, by the way, he’s found out is his daughter, so he has a lot at stake now? At one point he goes to question some of the beekeepers, only to be attacked by bees and stung (he has a bee allergy, of course). He’s saved by the colony’s doctor, who seems semi-sane, and has an audience with Sister Summersisle, whose “feminine goddess gentility” masks a major whack job.

After spending the night in the chilled water of a well—what, no hypothermia?—Malus is saved by Willow, and now he’s really pissed. He goes on an investigative rampage, just as the colony makes ready for their ritual. He decks women left and right if they get in his way—most are wearing animal masks, which provides more unintentional humor. As they start their parade, he clocks Sister Beech, a masculine woman, and dresses up in her bear costume. (This movie was nominated for five Razzie awards, one of them for Worst Screen Couple: Nicolas Cage and the Bear Costume.)

SPOILER ALERT: As the colony reaches a clearing, Malus sees Rowan tied to a tree. He decks more women, rescues Rowan, and races into the forest. The girl is now in the lead, and she guides Malus right back to Sister Summersisle and the colony. Surprise, Willow is Sister Summersisle’s daughter, and this whole thing was orchestrated to make Malus the sacrificial lamb, since his blood is mingled with the colony. This is a definite WTF moment for the poor jerk.

There are two endings to this film, both available on the DVD (if you dare), so I’ll mingle them here. The screaming Malus is tied down, his knees broken with a sledgehammer, a beekeeper mask slipped over his head. Bees are poured in from the top as he shrieks the now infamous, “Oh no, not the bees!” (This scene alone made the film a mild cult classic; check it out on YouTube.) They drag his shattered body to the Wicker Man, a huge effigy—these gals really hate guys—and raise him to the top. Still screaming, Malus watches as his daughter, sweet little Rowan, sets the Wicker Man on fire as the colony chants, “The drone must die!” If you’ve ever wanted to be transported into a movie to do some serious bitch-slapping, this is the one. Fade to black…

…until Six Months Later, when two guys in a bar (one is James Franco) look to pick up a couple of women. Surprise, it’s Sister Willow and Sister Honey, and they sure seem willing. While contemplating what will happen to these dudes we hear the bees buzzing and the screams of Malus as the film goes into a final fade.

I went into viewing The Wicker Man without any preconceived notions, and being a Nicolas Cage fan I could forgive a lot. More than likely the last fifteen or so minutes did me in on this film. As a strong believer in the Feminine and the Goddess, I didn’t care to see such a perverted interpretation. But, that’s me; you can be the judge.