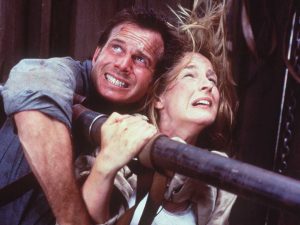 Recently, while watching the Gerard Butler-fueled disaster film, Greenland, it occurred to me that a lot of couples with troubled marriages/relationships have been brought together by their harrowing experiences in movies of this genre. Weird. Here are just a few examples.

This is one of my favorite movies in any genre. (See my post, “Blowing Shit Up: TWISTER And INTO THE STORM.”) Former storm chaser Bill Harding (Bill Paxton) shows up with his fiancé in tow to have his estranged wife, Jo (Helen Hunt), also a storm chaser, sign the divorce papers. An onslaught of numerous tornadoes puts them back in the field together and ultimately has the fiancé saying, “Screw this, I’m outta here,” and heading home. After surviving a deadly F5 tornado the Hardings are making plans for how they’ll handle all of the new funding that will be coming their way—just like the good old days. 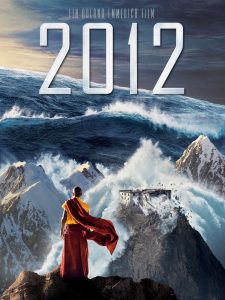 Just like the Mayan calendar warned everyone, the end of the world as we know it is coming in 2012. World leaders are trying to make plans that will ensure humanity’s survival. It involves lotteries (a common theme), saving the best of the best. This is not made public.

Struggling science fiction writer (I can relate) Jackson Curtis (John Cusack) somehow becomes involved in the clandestine goings-on while on an outing with his two kids. His estranged wife, Kate, is living with her boyfriend in L.A. When earthquakes, tornadoes, and every natural disaster that you can imagine start tearing the planet apart, Jackson narrowly escapes with the others as L.A. falls into the sea. The boyfriend comes in handy because he can fly a plane, though of course he will not survive. To reiterate, their harrowing experiences will bring Jackson and Kate back together, one big happy family. 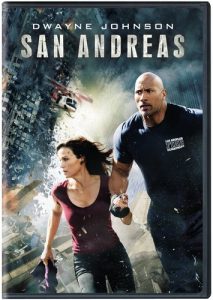 Ray Gaines (Dwayne Johnson) is a helicopter rescue pilot for the Los Angeles Fire Department. He blames himself for the drowning death of his younger daughter, which has caused a rift between him and his estranged wife, Emma, who is planning to move in with her rich-guy boyfriend, Daniel. (See my post, “Whole Lotta Shaking Goin’ On.”) On the day the divorce papers arrive, L.A. experiences a huge 9.1 quake. Ray rescues Emma from the top of a high-rise building (seriously) moments before it collapses.

Meanwhile, the quake is poised to devastate San Francisco, where their other daughter, Blake, has flown with Daniel. It happens while they’re in his car down in the parking structure. Blake is trapped inside the car, while the cowardly Daniel leaves her and runs off. She is rescued by two brothers, and she manages to contact her parents. Ray and Emma are off to the Bay Area to rescue her.

During the film’s quieter moments (There aren’t many) Ray and Emma deal with the death of their younger daughter, which seems logical. By the time they get to San Francisco and rescue Blake—Ray literally brings her back to life after she drowns—they are once again one big happy family.

I have to mention one of the best movie lines ever in this film. After Emma learns that Daniel abandoned Blake she calls his cellphone and leaves this voicemail: “You left my daughter alone? If you’re not already dead, I’m going to fucking kill you!” (Oh yeah, Daniel gets his, atop the Golden Gate bridge no less. Karma is a bitch.)

A comet is on its way to Earth (yeah, it’s been done before), accompanied by a gazillion fragments of rocks and ice. The fragments are already bombarding the planet, causing minor to major destruction. But the biggest chunk, which is projected to hit in a day or so, could cause an extinction-level event. Not good. 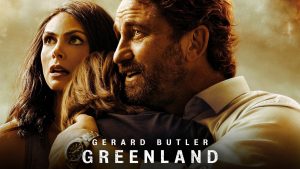 John Garrity (Butler), a structural engineer, lives in Atlanta with his estranged wife, Allison, and their diabetic young son, Nathan. The early tension between John and Allison is palpable. When John is notified that his profession qualifies him and his family for possible survival at an underground bunker complex in Greenland, they head for the nearest military base. To simplify—and to reiterate—their harrowing experiences will bring them so much closer, one big happy family.

One additional note on Greenland: it is not so much a disaster movie, with a load of special effects, as it is a study in the human condition. How will people react when faced with the prospect of an extinction-level event? Will they function as a community, or will the attitude be, “Save me, fuck you!” As this film illustrates, probably the latter. Hmm, does this seem familiar in these days of the pandemic?

In any case, there are many examples of disaster films involving estranged couples. The device is getting a wee bit old, am I right?