Throwback Thursday: Blowing Shit Up—Twister And Into The Storm 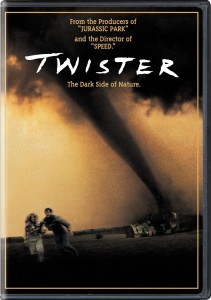 Natural disasters account for plenty of shit blowing up on the silver screen. This post first ran in 2015.

Yes, in case you didn’t know, tornadoes are responsible for blowing lots of shit up. Mother Nature does get pissed upon occasion. And nowhere is this better illustrated than in the two disaster movies, Twister (1996) and Into the Storm (2014).

Twister rates way up there among the fifty or sixty films that I include in my Top Ten. I love this movie, and so do many others, as evidenced by it being the second-highest grossing film of 1996. The screenplay was written, in part, by Michael Crichton and Joss Whedon, while its cast included Academy Award-winners Helen Hunt and Philip Seymour Hoffman, as well as capable veterans Bill Paxton and Cary Elwes. Pretty good lineup, ya think? (Paxton has since passed away. Loved that guy…)

Hunt plays Jo Harding, leader of an eccentric group of storm chasers. She is obsessed with creating an advance warning system for tornadoes to give people more time to find shelter. (Her father was killed by a category F5 tornado when she was a kid.) Jo and her team are getting ready to use a device developed in part by her estranged husband, Bill Harding (Paxton), which will send sensors up into a twister to record data. Now all they need is for a cell to start forming.

Bill, now a TV weatherman, shows up with his fiancée, Melissa, to have Jo sign their divorce papers. The team, led by the outrageous Dusty Davis (Hoffman), welcomes back The Extreme—Dusty’s nickname for him. Bill insists he’s not “back,” he’s only there to have Jo sign the papers. But when word of a cell forming nearby sends Jo and her team racing off, Bill and Melissa follow. 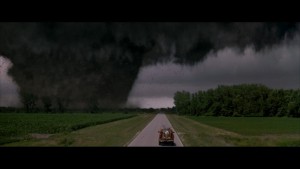 Oklahoma, where the story takes place, sits in the middle of the Great Plains tornado belt, often called Tornado Alley, and the storms can come in bunches. In Twister, the action takes place within a span of about twenty-four hours, and the incidents elevate along the Fujita scale, starting with a scary F2 and concluding with a devastating F5. The first tornado destroys Jo’s truck, so Bill, who is thrilled to be back in the field, offers his to Jo, while Melissa, who at first was curious about Bill’s past, is scared shitless by all the devastation. Seeing Bill and Jo rekindling their old flame, and ultimately terrified by a powerful twister that nearly kills them all, she ends their relationship and heads for home. Bill doesn’t seem all that broken up.

A subplot involves competition from a slimy storm chaser (Elwes) who stole Bill and Jo’s idea for sending sensors into the twisters and received corporate sponsorship to make his life easier. Ultimately, ignoring Jo and Bill’s warnings, the asshole will be sucked up into a mother of a twister and meet a nasty death. 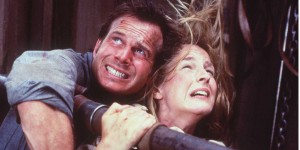 Bill and Jo gaze into the eye of the monster.

So from an F2 that takes out Jo’s truck, and a pair of sisters—twin water spouts that form over a lake and send some cows spinning—we go to an F3 on a gloomy road that starts a whole lot of shit to blowing up. Soon after, an F4 hits the motel where they’re spending the night and takes out a nearby drive-in movie—where The Shining is on screen; love that! Way more shit blowing up. And all the while, they’ve failed to get the device up into any of the twisters that will release the sensors and send data. Three down, one left.

But Jo and Bill will have a final chance in the form of an F5 tornado, the mother of all twisters—just like the one that killed Jo’s father. With more shit blowing up than during all the previous scenes combined (the film received Academy Award nominations for visual effects and sound), Bill and Jo manage to get the sensors up into the twister and then, strapped to some pipes, ride out the monster’s fury as it passes over them. Improbable—but who cares? Twister is one heck of a disaster movie. 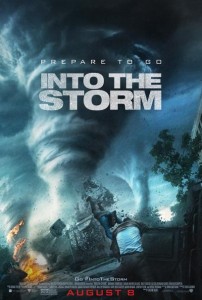 PREPARE TO GO INTO THE STORM

The critics were not kind to Into the Storm, which did well at the box office despite the negative reviews. Since I always ignore the critics, I prepared to watch it with an open mind—well, almost. I’d heard it was a “found footage” movie, and that kind of presentation does not thrill me. I didn’t care for The Blair Witch Project, or Cloverdale, or any “found footage” film. But such was not the case, and in fact I enjoyed this movie far more than I thought I would. (As always, I’m easily entertained.)

Unlike Twister, there are no major names in the film. Its two stars are Richard Armitage and Sarah Wayne Callies. Give up? How about Thorin Oakenshield in The Hobbit trilogy, and Lori in The Walking Dead? Still, they played their roles quite well.

A GRADUATION TO REMEMBER

The story opens with a bunch of teens in a car. It’s nighttime, but they can hear a tornado approaching. One rocket scientist gets out of the car with his camera to tape the twister. Bye-bye teens.

Gary Fuller (Armitage) is vice-principal of a high school in Silverton, Oklahoma. It is graduation time, and Fuller’s two sons, Trey and Donnie, are taping messages from the seniors for a time capsule. (I guess this is what some perceived as “found footage.”) 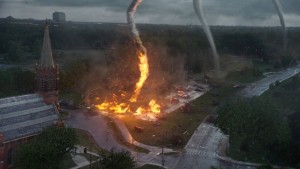 Concurrently, a storm chaser named Pete Moore comes to Silverton in a heavily armored vehicle to film a documentary on tornadoes up close and personal. His meteorologist, Allison Stone (Callies), predicted that cells would form there. When nothing happens, the pissed-off Moore threatens to fire Allison. But, of course, the cell re-forms, and a tornado heads for the high school, where the graduation is being held outdoors. As sirens blare, Fuller leads everyone to shelter inside the school building. Shit blows up, and the twister does some damage, but all survive.

Fuller and son Trey hook up with Moore, Allison, and the other storm chasers and head for an abandoned paper mill outside of town, where Donnie went to help a girl he has the hots for with a project. They are trapped out there now, and the barrage of tornadoes has only begun.

Just like in Twister, each ensuing tornado outdoes its predecessor in sheer power, and the climax involves a number of twisters coming together to form a monstrous EF5 (Enhanced Fujita). The film’s CGI effects, especially in the latter scene, are quite awesome, and there’s enough shit blowing up to stock a couple of movies. While most of you have doubtless seen Twister, it is probable that you missed Into the Storm, so I’ll stop here and won’t spoil the ending for you. Suffice to say, living in Tornado Alley has never been high on my wish list. Living on or near California’s earthquake faults is scary enough!