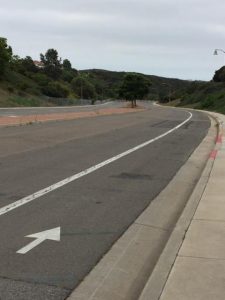 The ass-end of Cannon Road is usually deserted, and a great place to walk and think.

Yes, I mean that literally…but not in a nasty way. Quite the opposite. I’ve written over two dozen novels and countless stories, articles, blog posts, etc., and there has been one consistency over the decades that I’ve been engaged in this: I do my best preliminary thinking about scenes, characters, story arcs, and everything else I write while either on a long walk or a hike.

I began writing in the late ’70s, already past my thirtieth birthday. (It’s never too late.) Since then I’ve taken three hiatuses (hiati?) from writing, all for reasons of a personal nature—none, I’m relieved to say, for extended cases of writer’s block. (See my post, “Writer’s Block: What’s That?”) In fact, I cannot recall a time when I had to deal with writer’s block.

Why do I bring that up? Well, the most recent hiatus lasted about eight years and ended less than two months ago, when I began writing a new book. Maybe it had to do with the effects of this insane year of 2020, being quarantined and all that. I only know that on my usual morning walks my musings suddenly turned from the crappy state of our country and the world, the Padres, the possibility of no college football season, what I was going to have for lunch, and other important topics like that, to the continuation of a storyline that I’d first started working on nearly three decades ago. And when it nagged at me on subsequent walks and hikes, I knew that the time had come to get back to the laptop for something other than Klondike solitaire and CNN.

Still, before I put the first words down I experienced a bit of hesitancy, doubtless caused by the lengthy layoff. No worries, because it turned out to be just like riding a bicycle, something you could do even after not getting on one for the longest time. And I dove in well prepared, having mapped out so many of the chapters on my morning walks.

In my decades as an editor, writing instructor, workshop leader at conferences and retreats, etc., I have met countless writers, from novice to famous. Many of them told me that they are on board about taking advantage of long walks and hikes to find their mojo. I am definitely not alone in this.

But a word of advice: as much as we writers tend to get lost in our creativity, we run the risk of ignoring our surroundings and putting ourselves in danger. In my case, the 55+ community in which I live has no sidewalks, and some of the elderly drivers in here…well, let’s just say I’ve had my share of close encounters, and not with ET. It takes me ten minutes to reach our main gate and escape, during which I try not to get lost within my book. Outside, I’m on the sidewalk—relatively safe—or on a nearby nature preserve, totally safe, except for an occasional mountain lion.

Writing after a long hiatus is just like getting back up on a bicycle.

Two of my favorite authors, Stephen King and W.P. Kinsella, were both hit by vehicles while out walking. King nearly died and did not write for a few years. Kinsella, a Canadian, suffered a brain injury and did not write for many years. He ultimately died via doctor-assisted suicide. Now, I’m not saying they were distracted with their thoughts on their walks; I just don’t know. But it is something to think about.