What Have They Done To My Game?

When the Padres-Rockies ballgame on the tube ended on a spring night in 2008, I climbed into bed. At 1:30 a.m. Following a 22-inning game that played out over six-plus hours. Was I bummed? Well yeah, because the Padres lost, 2-1. Was I bummed because I’d watched every pitch for those six-plus hours? Not at all. Because that’s baseball, and baseball has always been a timeless game. Until now.

BASEBALL ON THE CLOCK?

Looking to offset dwindling attendance and interest, with games averaging well over three hours in length, Major League Baseball has announced a number of rule changes that will take effect next season. The two most significant changes—which the players’ representatives futilely voted against—are a pitch clock (15 seconds with no runners on base, 20 seconds with baserunners), and a ban of any form of defensive shift. The former is meant to speed up the game, the latter to provide more offense. There are a whole host of others, but rather than list them all here, have a look at the MLB website. 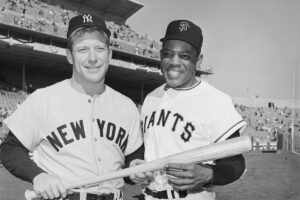 Mickey Mantle and Willie Mays would not be thrilled about the new rules.

As an old-timer and somewhat of a baseball purist, I’m kind of bothered by some of these new rules. I mean, regarding the defensive shift, teams should be able to align their defense any which way they want to prevent baserunners. Isn’t that the point? And while some pitchers tend to stand around the mound forever before throwing the ball (remember Steve Trachsel or Rafael Betancourt, both human rain delays?), they shouldn’t have to be watching a clock instead of focusing on what pitch to throw next.

Yes, I know the younger generations want things faster, and louder, and so on—“more teeth,” as they said in Jurassic World—and I also know that my generation is headed for the boneyard. But I’m afraid that the timelessness of this great sport will also become a thing of the past. I’ll give these new rules a shot—what choice do I have?—but as I said before: what have they done to my game?