Throwback Thursday: What If?

This post from back in time talks about a two-word phrase that, without question, is an integral tool in every novelist’s toolbox.

Everything I write—everything that just about all novelists write—begins with those two words. I prepare detailed outlines for my stories, so that I always have a pretty good idea of where I’m going. But even before outlining a story, there is the “what if?” 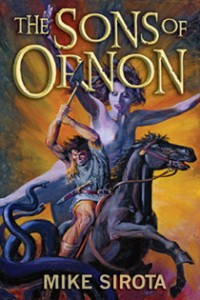 I thought about the “what if?” factor this week as I prepared to reissue my sword & sorcery novel, The Sons of Ornon—first published in 1980 as The Twentieth Son of Ornon. Whoa, 1980! Hard to believe that a five-year-old kid could get a book published. 🙂 Yeah, and if you believe that, I have land to sell you in the kingdom of Shadzea.

Anyway, given my passion for the works of Edgar Rice Burroughs, I had written a number of sword & planet novels first before getting turned on to the sword & sorcery stories of Robert E. Howard. In my early writing years I wrote by the seat of my pants, without an outline, and that made “what if?” all the more important. For Ornon, the “what if?” went something like this:

WHAT IF…an ancient kingdom called Shadzea had been ruled for hundreds of years by an unbroken line of powerful and ruthless kings?

WHAT IF…Shadzea’s ability to survive and thrive in this dangerous world had to do with a rather unique rite of succession?

WHAT IF…Ornon, the king currently on the throne, got fifty different women pregnant during a period called the Mating Week? (well duh, this is a fantasy…) 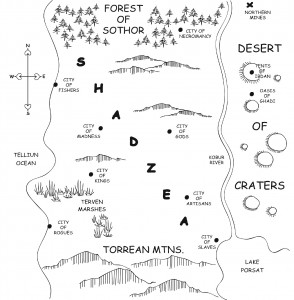 WHAT IF…the first twenty healthy male babies were selected as princes of Shadzea, to be raised together, to learn to despise one another, to endure four terrible trials that would undoubtedly reduce their ranks before they reached adulthood, and finally to have those that are left face off in bloody combat on the Day of the Reckoning in front of their father until only one remained standing—the Survivor, the future king of Shadzea?

Okay, so these were the bare bones of The Sons of Ornon. But what drives the story? And who do we care about, and root for?

WHAT IF…the first son, Buz, was Ornon’s favorite, while the twentieth and last son, Dulok, meant nothing to him?

WHAT IF…Buz’s persona was such that he made Darth Vader seem warm and fuzzy, while Dulok, even as a kid, was the most noble of souls?

At this point, with the preceding run of “what if’s?” piling up, you can already sense from where the story’s tension and conflict would be drawn.

WHAT IF…Buz’s mother, the king’s secret concubine, is a shrewish, ambitious woman who shapes Buz into what he becomes, while Dulok’s mother, a gentle kitchen servant, instills all her love into this child during his first eight years?

WHAT IF…a couple of years after the princes are separated permanently from their mothers, Dulok finds a way to spend some time with his beloved mom?

WHAT IF…Buz snitches on him, and before Dulok’s eyes, Ornon thrusts a sword into his mother’s heart? 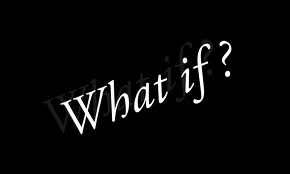 Yes, that’s a lot of “what if’s,” and they all happen early in the story. Clearly, Dulok has vengeance in mind, and readers will wonder just what that revenge will be for such a despicable, cowardly act. From there Dulok encounters monsters, magic, demons, deprivation, bloody battles, enslavement, torture—in other words, the usual for the heroic fantasy genre.

Oh, and one other element: romance. How will Dulok weigh his lust for vengeance against his love for the sweet, beautiful Sallia? I may spill a few buckets of blood in my stories, but I’m a romantic at heart.

And all of this born out of two words: WHAT IF? You writers, use them well.