I watched this film again the other day, and I still marvel at the subtle terror that it engenders. This post first ran in 2018. 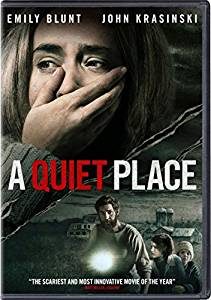 Just how scary is the 2018 thriller, A Quiet Place? Okay, perhaps you’ve seen a Cox commercial where a woman is watching Stranger Things and sitting on the edge of her couch looking seriously freaked out. That’s about what this jaded horror aficionado looked like all through A Quiet Place. Yeah, it’s that scary.

The film was co-written by John Krasinski, who also directed it and co-stars alongside his real-life spouse, Emily Blunt. They are both excellent as Lee and Evelyn Abbott, an engineer and a doctor respectively. But the most compelling role goes to deaf teen actress Millicent Simmonds as their daughter. Regan. She was remarkable.

WHERE DID THEY COME FROM?

A plot synopsis, even with no spoiler alert, would not do this film justice to those who haven’t seen it, so today’s post will be short and sweet. I’ll present the basic premise and talk about the first five-ten minutes, and we’ll leave it at that.

The Abbott family makes a foray into a deserted town.

As we’ll learn later from newspaper clippings and silent videos on a computer screen, the entire planet has been overrun by monsters. It is not clear where they came from…they just appeared and, nearly three months later, have killed most of the world’s population. They are armor-plated, indestructible, and although they are sightless they have hypersensitive hearing. Make a sound and you’re dead; the damn things are everywhere.

Lee and Evelyn Abbott live on a farm in upstate New York with their three children: congenitally deaf daughter Regan, sons Marcus and Beau. Having always communicated with Regan via American Sign Language, the family has no problem remaining silent. (There is very little spoken dialogue throughout the film, most of their “conversations” being presented with subtitles.)

Regan and Evelyn are horrified to see Beau taken.

We join the Abbotts as they make a foray into a nearby deserted town to gather supplies. They move about carefully, every step measured. This is especially hard for Beau, who is only four years old. At one point he picks up a toy space shuttle off a shelf and starts to play with it. But Lee takes it away from him, at the same time removing the batteries. Seeing how sad her brother looks, good-hearted Regan gives him the toy as they’re about to leave. Unseen by the family, Beau pockets the batteries.

Out in the open, the family must cross a bridge to reach their home. They appear to know that many of the monsters lurk in the area. Beau lags behind as his family reaches the middle of the bridge. He inserts the batteries into the space shuttle and begins to play with the noisy toy. The family freaks and waves for him to turn it off as they race toward him. Too late; one of the monsters, moving at incredible speed, snatches Beau and carries him off. This is a WTF moment if there ever was one. 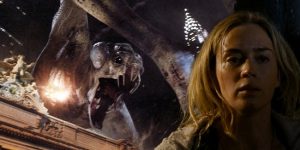 The monsters come at the slightest sound.

So now we know what the Abbotts must face every day of their lives, which makes the tension palpable throughout the rest of the film, given the nearly endless silence. I’ll leave it at that. The film resonated with reviewers and audiences alike, scoring 95% on Rotten Tomatoes and garnering “universal acclaim” on Metacritic. If you’ve avoided A Quiet Place, believing it to be “just another shlock horror movie,” you should give it a try. It is an unforgettable piece of filmmaking.

I haven’t yet written about A Quiet Place II, so watch for that in an upcoming post.