Wow, has it really been four years since one of my favorite actors passed away?! Time just seems to whiz by… 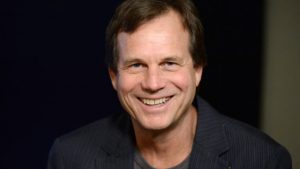 A fine actor—and, from all I’ve ever heard about him, and even better person—Bill Paxton passed away a little over a month ago at the all-too-young age of sixty-one. A personal favorite of mine, Paxton played in quite a few of the fifty or sixty films that I include in my Top Ten. My way of remembering him is to look back at some of those roles. 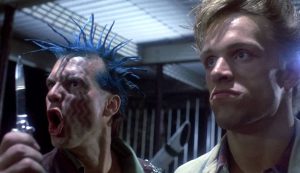 Early in his career, Bill Paxton had about a minute or two of screen time in James Cameron’s classic, The Terminator, where he was credited as “Punk Leader,” spikey hair and all. The scene occurs at the start of the film when the Terminator (Arnold Schwarzenegger) arrives from the future in his birthday suit. He approaches three punks, one of whom jokes, “Wash day tomorrow, nothing clean, right?” Arnold replies (robotically), “Nothing clean, right.” Punk Leader comments, “Hey, I think this guy’s a couple cans short of a six-pack.” Arnold then demands his clothes, to which Punk Leader (with switchblade drawn) shouts the memorable line, “Fuck you, asshole!” and stabs the indestructible Terminator. His heart is then ripped from his chest.

Bill Paxton played Private Hudson in Aliens, one of the best sequels ever made, certainly the finest in this genre. As a Colonial Marine, Hudson and his unit accompany Ellen Ripley (Sigourney Weaver) to exo-moon LV-426, where she and her (long-dead) crew encountered the Alien in the first film. After Weaver’s tour-de-force performance, many agree that Private Hudson had the lion’s share of memorable dialogue. 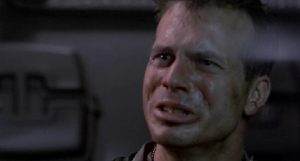 Hudson goes through three phases during the film. The first: bad-assed braggadocio, as seen in this dialogue during the descent to LV-426: “I’m ready, man, check it out. I am the ultimate badass! State of the badass art! You do not wanna fuck with me. Check it out! Hey Ripley, don’t worry. Me and my squad of ultimate bad-asses will protect you! Check it out!”

And, of course, who could forget his memorable line, “Stop your grinnin’ and drop your linen!”

Another film directed by James Cameron, True Lies is a super action-comedy starring Arnold Schwarzenegger (who else?) and Jamie Lee Curtis. Bill Paxton, showing his comedic talent, adds to the fun in his role as a slimy car salesman named Simon who pretends to be a secret agent in order to impress bored housewives and get them into the sack. Arnold’s character actually is a secret agent, but his bored wife (Curtis) thinks he is a computer salesman, and now she is being set up by Simon. Schwarzenegger and his partner (Tom Arnold) “arrest” Simon and scare the living crap out of him. At gunpoint, Simon says:

And as a topper, super-spy Simon pees his pants!

In this, my favorite disaster movie, Paxton landed a starring role opposite Academy Award-winner Helen Hunt as Bill “The Extreme” Harding, a former storm chaser and now big-city weatherman. While he doesn’t have much in the way of memorable lines in Twister—that distinction goes to the late, great Phillip Seymour Hoffman as Dusty Davis—he does have the lion’s share of the scenes. 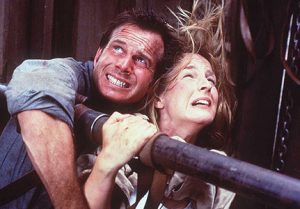 Bill and Jo, together again in the eye of an F5 twister.

Bill and his fiancé Melissa show up at the camp of his former team of storm chasers, led by his soon-to-be ex-wife Jo (Hunt), a woman obsessed with tornadoes since an F5 killed her dad when she was a kid. He’s there to pick up the divorce papers. But when a tornado is spotted and the team takes off, Bill accompanies them. Melissa comes too, thinking it would be “fun.”

But by the end of the third tornado (they’ve increased in magnitude along the Fujita scale: F1, F2, F3), Bill and Jo are back in sync, and Melissa is freaked out of her mind. Following the F3 she overhears Bill tell Jo, “Things go wrong. You can’t explain it, you can’t predict it. Killing yourself won’t bring your dad back. I’m sorry that he died, but that was a long time ago. You gotta move on. Stop living in the past, and look what you got right in front of you. Me, Jo.”

Following the next tornado, an F4, Melissa ends the engagement and heads for home. Bill and Jo are together again and just about ready to confront an F5. The final ten-fifteen minutes of Twister just fly by (no pun intended).

Okay, I’ll admit it: I am quite fond of the sappy love story in Titanic, one of the most honored films ever. Bill Paxton landed a key role in this multi-layered story, which takes place both in the “present day” (1996) and in April of 1912. As treasure hunter Brock Lovett he and his crew have discovered the wreck of the Titanic on the floor of the Atlantic Ocean. His primary goal is to find the Heart of the Ocean, a priceless gem that apparently went down with the ship. When he finds a drawing of a beautiful young woman wearing nothing but the jewel, he is all excited. But the Heart of the Ocean remains elusive. 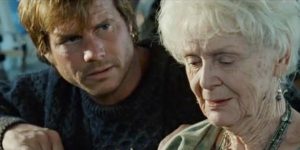 Brock Lovett is stunned by Rose’s tale of the Titanic.

A 101-year-old woman named Rose is brought on board, and Lovett learns that she is the seventeen-year-old girl in the sketch. She then tells him and his crew the entire story of what happened over those few days in April of 1912. Lovett ultimately decides to end his search for the Heart of the Ocean—which Rose still has in her possession. And by this time I’m sure we all know what she does with it, don’t we?

I could go on and on about the accomplishments of Bill Paxton, but I think you get the idea. Suffice to say that he continued working right up until his death. He had a role in the current TV series, Training Day, and he will appear posthumously in a sci-fi drama called The Circle, with Emma Watson and Tom Hanks.

Bill Paxton, RIP. “Game over, man.” You will be sorely missed.