It took me a long time before I read my first eBook, but now… This post first ran in 2015. 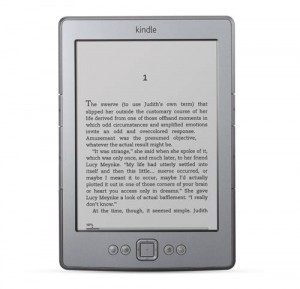 I admit it: when it came to reading eBooks on Kindle or other e-readers, I stood in the forefront of many other Luddites who insisted that holding a paperback or hardcover book—a REAL book—in their hands was the only way to go. Heck, I didn’t even own a Kindle until a few years ago, and that came to me by way of a gift. And I hardly ever used it. But something happened to make me realize how the two could coexist, and now I know that I could not live without an e-reader.

First off, I love real books. I love the smell of them, both in new and used bookstores. At one time I owned thousands of them, but various moves over the decades—including a major downsizing twelve years ago—saw many of my books donated to libraries. Even so, there are still hundreds of them around the house, including collections that I began when I was a kid back in the Jurassic period. (Okay, I’m exaggerating; it was the Pleistocene.) I’m talking Edgar Rice Burroughs, Robert E. Howard, Jules Verne, H.G. Wells, Otis Adelbert Kline, Ray Bradbury, and Richard Matheson, among others. Most are so old, and printed so cheaply back then, that I have them individually wrapped in cellophane. Yeah, they mean a lot to me. 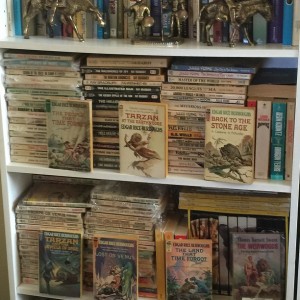 Working as an editor and writing coach for nearly three decades, I spent the majority of time reading what I guess were thousands of manuscripts. Accordingly, for the preservation of my eyesight, I took few “busman’s holidays” during this time and hardly read any books just for fun. At the start of it all I made a promise to myself: when I retired, I would only read for fun, and I would catch up on a lot of books that I bought along the way.

So did I keep that promise? Well, 2015 was the first year that I’d been fully retired, and I read more books in the first eight months than I did in the previous twenty-something years.

SO WHAT ABOUT THE E-READER?

I had read every single one of Edgar Rice Burroughs’ seventy-plus books twice, but I hadn’t opened any of them in decades, and these were the ones that I most looked forward to reading again. So I picked out my forty-cent edition of The Land that Time Forgot—the first in ERB’s Caspak trilogy—opened it to the first page, and—guess what? The type was microscopic! In addition to cheap paper, the publisher wanted to print as few pages as possible to save money. 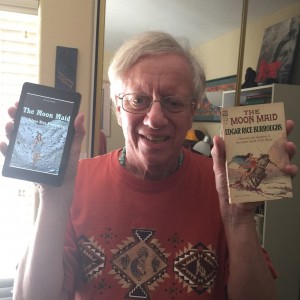 One to read, one to cherish.

Funny, I’d never had a problem reading ERB when I was a kid. But with these old-guy eyes, made even older by decades of editing and such, I had to squint to see what was on the page. Nope, this wasn’t going to happen.

So I checked on Amazon and found that just about every ERB novel was available in eBook. And since most of his novels are in the public domain, they’re either free or cost next to nothing to download. How cool is that! I purchased the Caspak trilogy for .99¢. That’s a whopping .33¢ a book. (Just wanted to show off my math wizardry.) The entire Tarzan collection—about two dozen books—costs three bucks.

But best of all, on my Kindle Fire—and pretty much all other e-readers—you can adjust the type to any size you want! To me, and my 70 million fellow Baby Boomers, that is a wonderful feature to have available as we enter the time of our lives where words like “cataracts” and “macular degeneration” are commonplace. 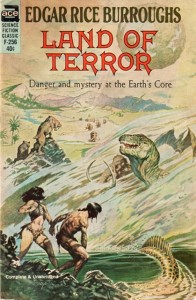 All of that said, I still love the smell and the feel of a real book in my hands. So, here’s what I’ve been doing. I’m currently reading ERB’s seven-book Pellucidar (Earth’s Core) series (I’m into the sixth book) on Kindle. Before I begin reading I unwrap the corresponding paperback, read the back cover and front blurbs, then prop the book up next to me and enjoy the classic cover art all throughout the read. If I come across a typo (there seems to be many in eBooks) or something I don’t understand, I check it out inside the real book. For me, it’s the best of both worlds.

Will I still buy real books? Absolutely, as long as I can check out the typeface when I’m in a bookstore to make sure it’s readable. Let’s face it, older people read, and I think the publishers know that we are many these days, so microscopic type is not the wisest thing. (And yes, I know there are LARGE PRINT books, but they’re often expensive.)

Okay, back to Edgar Rice Burroughs. Land of Terror is propped up alongside me as we “speak.”