Throwback Thursday: MORTAL ENGINES—A Guilty Pleasure? No, A Genuine One!

I’m usually not fond of dystopian movies, but this one rocked! This post first ran in 2019. 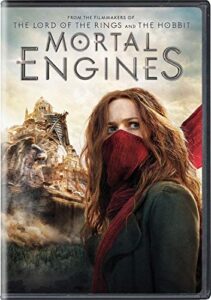 By all accounts the 2018 dystopian/science fiction film, Mortal Engines, should have appeared in one of my Guilty Pleasure posts. It rated no higher than 27% on Rotten Tomatoes, and it was considered the biggest box-office bomb of the year. But I’m not presenting it as such because, despite my initial reluctance to even watch it, I thoroughly enjoyed this compelling—if somewhat disturbing—story, produced by none other than Peter Jackson.

Mortal Engines is based on the first book of a four-volume Young Adult series by award-winning British author Philip Reeve. Jackson and some of his Lord of the Rings/Hobbit cronies wrote the screenplay, and the film was directed by Christian Rivers, who won a visual effects Oscar for his work on Jackson’s King Kong. While the main protagonists in the book, Tom Natsworthy and Hester Shaw, were about fifteen, Jackson aged them a bit for the movie. There were also a number of other changes, but as Reeve himself said, “Christian Rivers has done a fantastic job—a huge, visually awesome action movie with perfect pace and a genuine emotional core.” I could not agree more. 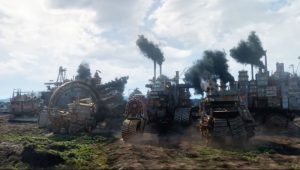 Predator cities battle one another.

No detailed synopsis here, just a brief overview. Mortal Engines takes place a millennium after an extinction event known as the “Sixty Minute War” destroyed much of the planet. Survivors created “predator” cities, leviathans mounted on wheels and propelled by huge engines. These cities, specifically London in this story, absorb (or “eat”) other cities, towns, and villages for their resources as they roll across the Great Hunting Ground (continental Europe). Their perceived “enemies” are stationary, traditional (Non-Traction) cities in Asia, primarily the area known as Shan Guo (China), which is protected by a great wall (not the Great Wall) known as the Shield Wall. 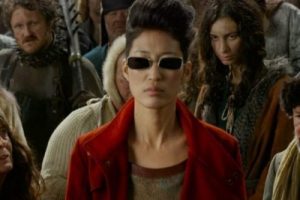 With resources drying up, London is crossing Europe on its way to this new hunting ground. They have a plan for taking out the Shield Wall with what they refer to “old-tech,” using a weapon of mass destruction, called MEDUSA, first utilized during the Sixty Minute War to wipe out most of Earth’s population. The guy who brought this old-tech to London is Thaddeus Valentine, the head of the Guild of Historians, and a real whack job with greater aspirations. Hugo Weaving plays Valentine in his most deliciously evil role since Nazi Johann Schmidt, head of Hydra, in the first Captain America film.

A scarred young woman named Hester Shaw sneaks into London in an attempt to assassinate Valentine. Seems that, years earlier, Valentine stole the old-tech from Hester’s mother, killing her and scarring Hester in the process. She is thwarted by an unimportant Apprentice Historian named Tom Natsworthy but escapes down a chute leading out of London. When Valentine catches up to Tom and learns the name of his assailant he inexplicably pushes the young man down the same chute. 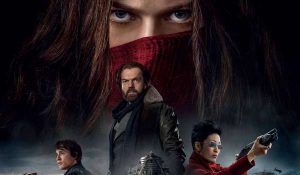 Hester and Tom’s adventures across the surface of  the dangerous Great Hunting Ground comprise a chunk of the story. At one point they are rescued by Anna Wang, an agent of the Anti-Traction League, those who believe the future lies in stationary cities, as the world used to be. Hester and Anna comprise two of the most impressive kick-ass women that you’ll ever find in one story. Eventually they will piece together the backstory about the MEDUSA device that Valentine stole from Hester’s mother, and it will become their self-appointed task to stop him from destroying the Shield Wall—and millions of people—before the predator city of London rolls within range of Shan Guo. 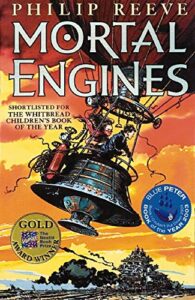 Okay, if dystopian science fiction is not your cup of Earl Grey, I can understand you passing on Mortal Engines. But the ever-popular Hunger Games franchise falls in that genre, and audiences flocked to those films. So what was it—the reviews? Do moviegoers put that much trust in someone’s opinion? I sure as heck don’t. Wow, I would’ve missed out on so many entertaining films if I just went by the reviews. My numerous Guilty Pleasure posts will attest to that.

Conversely, I have watched films with 85%, 90%, even 95% and higher on consensus, and I’ve wound up disgusted, bored, or whatever because…well, they sucked. Screw what others think or say. (As it is said, opinions are like assholes. Everybody has one, and they all stink.) If it’s a genre that you like, at least give it a try. That’s what I did with Mortal Engines, and I am not sorry.