The Iowa Wave is still going strong! Performed by 70,000+ folks at every Iowa Hawkeye football game in the fall, the Wave honors children at a nearby hospital who are battling some nasty stuff. This post first ran in 2018.

A relatively new “tradition” honors children who are dealing with life-threatening illnesses. Call it The Iowa Wave, The Hawkeye Wave, or simply just The Wave; this event has warmed the hearts—and brought tears to the eyes—of millions during its brief existence.

The University of Iowa’s Stead Family Children’s Hospital on the Iowa City campus looms tall over Kinnick Stadium, where the Hawkeyes play football on a number of fall Saturday afternoons and evenings. In 2017 the top floor of the hospital was completed just prior to the start of the football season. It included a large room called the Press Box, where the young patients and their families could watch their favorite team play.

The idea for The Wave began on—where else?—social media, with fans suggesting that the football team do something to honor the kids in the hospital. At the first home game of 2017 the PA announcer asked the 70,000+ people inside Kinnick Stadium, and the Hawkeyes football team, to turn toward the hospital and wave to the patients just after the first quarter ended. The response was overwhelmingly positive, and a remarkable tradition was born. 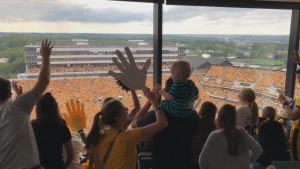 The kids in the Children’s Hospital respond to the love sent their way.

Subsequently the visiting teams, game officials, the media, and everyone else inside the stadium joined in honoring the kids. At night games, the fans lit up their cell phones and waved them. It was, and is, truly a sight to behold. The TV networks, which usually cut to commercials between quarters, now stay focused on the event.

Jacqueline and I visited family in Iowa a while back. On Saturday night we were all gathered around the flat screen to watch the Iowa-Wisconsin game. I got chills watching The Wave, despite the many times I’ve seen it, and my bride was in tears, as always. Such is its impact.

The next home game for the Iowa Hawkeyes in on September 3rd. Even if you’re not a football fan, check out The Wave at the end of the first quarter. You can also go to YouTube for a sample of this heartwarming tradition.