Throwback Thursday: “I Crap Bigger Than You”—Lines From A Comedy Classic 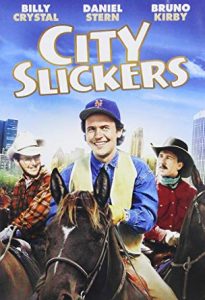 This is one of the funniest movies EVER. I first presented the post in 2019.

Billy Crystal is one of my favorite performers, and his 1991 film, City Slickers, is a gem, much loved by critics and moviegoers alike. As you would guess, he has many of the best lines in the film…but not all. There are plenty of contributors in this laugh-a-minute story.

Crystal plays Mitch Robbins, a New Yorker undergoing a midlife crisis. He heads west to “find his smile again” by taking part in a cattle drive from New Mexico to Colorado. Accompanying him are his two best friends, neurotic and henpecked Phil (Daniel Stern) and playboy Ed (Bruno Kirby), a legend in his own mind.

A year prior, the three friends are running with the bulls in Pamplona, Spain, when one of the critters gores Mitch in the butt. A doctor who speaks no English is working on that part of the anatomy, which makes Mitch nervous: “Excuse me, el doctor. Hellooo. Don’t sew up anything that’s supposed to remain open, okay?”

At present Ed is dating a young, beautiful underwear model. Mitch is curious about this: “Ed, have you noticed that the older you get, the younger your girlfriends get? Soon you’ll be dating sperm.” 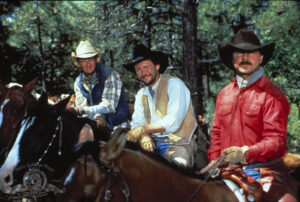 The city guys are ready to hit the trail.

The late, great Jack Palance plays Curly, the trail boss, in the role that won him an Academy Award. The first time he appears, at Clay Stone’s ranch, he nearly hangs one of the cowboys assigned to the drive, and almost emasculates a second guy, for harassing Bonnie Rayburn, a fellow driver. Mitch says: “Did you see that guy? That is the toughest man I’ve ever seen in my life! Did you see how leathery he was? He was like a saddlebag with eyes!”

Bonnie is on the drive following a break-up. Phil asks her if she broke up with the guy because of baseball. “Uh, no, we had different needs. I needed him to treat me decently and get a job, and he needed to empty my bank account and leave.” 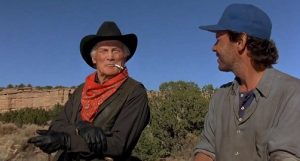 “I crap bigger than you.”

Mitch has pissed Curly off a few times with his smart mouth. Looking down on Mitch from his horse, Curly grins and delivers his most iconic line: “I crap bigger than you.” (I believe he said that at the Academy Awards show too.)

But Mitch doesn’t give up. When he says, “Hi Curly, killed anyone today?” Curly replies, “The day ain’t over yet.”

After Curly dies, the two cowboys get drunk and threaten all of the drivers. Up steps a well-armed Phil, who faces them down and sends them packing. He then breaks down in front of Mitch and Ed: “My life is over! I’m almost forty years old, and I’m at the end of my life!” When Mitch tells him that he has a clean slate, he replies, “I got no place to live. And I’m gonna get wiped out in the divorce because I committed adultery. So I may never see my kids again. I’m alone. How’s that slate look now?”

Mitch appears to be enjoying himself on the cattle drive. He even sings a variation of the old Rawhide theme: “Rollin’, rollin’, rollin’, keep them dogies rollin’, man my ass is swollen, Rawhide! Get ’em up, move ’em out, wake ’em up, get ’em dressed, get ’em shaved, comb their hair, Rawhide! Tie me down, tell me lies, pull my hair, smack my thighs – with a big wet strap of, Rawhide!” 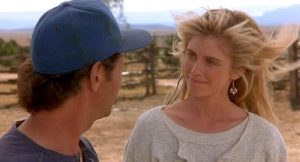 But Phil is definitely not having fun: “Let’s have some peace and quiet around here, for chrissakes! I’ve been under a lot of stress! I lost my wife, I lost my job, and I’m developing some kind of rash from making in the bushes!”

A drunk named (appropriately) Cookie fixes the grub for the drivers. What kind of grub, they want to know: “You ain’t gonna get any nouveau, amandine, thin crust, bottled water, sautéed city food. Food’s brown, hot, and plenty of it.” (I liked this line enough to put it into my ghost story, The Burning Ground.)

After the cowboys desert the group, and Cookie is hauled off with a broken leg, most of the drivers leave the herd and head to Clay Stone’s ranch in Colorado. But not Mitch and his pals. Against all odds the intrepid trio, humming the theme from Bonanza, approaches the ranch with the herd intact, as Clay exclaims, “Great gobs of goose shit!”

Later, the colorful Clay adds, “I’m as happy as a puppy with two peters!” 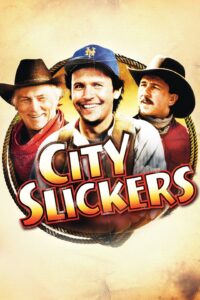 The cattle drive has done wonders for our guys. They return to New York with a new sense of purpose. Phil is beginning a relationship with Bonnie; Ed vows to marry his girlfriend and get her pregnant. As for Mitch, when his wife suggests he leave his boring job, he says, “No, I’m just going to do it better. I’m going to do everything better.”

As he hugs his wife and two kids, Mitch adds, “Today is my best day!”

Indeed; and City Slickers is one of the best comedies ever. Billy Crystal did make City Slickers II, which had its share of laughs, but like most sequels it could not hold a candle to the original. As they said at the start of the cattle drive: “Yee-hah!”