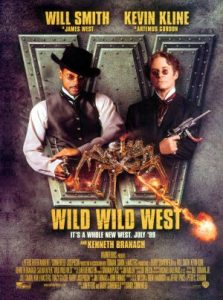 I’ve watched this goofy film one more time since this post first ran in 2016, and I still think it’s a hoot—which puts me in a vast minority.

I may be the only person on the planet who found the 1999 “steampunk western action comedy” film, Wild Wild West, a “pleasure” to watch. Heck, even its star, Will Smith, hated this movie. But, as I’ve said a thousand times, I’m easily entertained, and I got a kick out of the implausible gadgetry, the “tasteless” humor, the goofy plot, and co-star Kevin Kline’s tour de force as both Artemus Gordon and President Ulysses S. Grant. And despite his disdain for the film, Will Smith is one of my favorites in whatever he performs. (His role in Concussion was Oscar-worthy, yet he wasn’t even nominated. Just sayin’.)

NOT YOUR FATHER’S JIM AND ARTIE

Wild Wild West is a big-screen version of the popular TV series that ran for four seasons during the 1960s. I loved that show, which starred Robert Conrad as Jim West and Ross Martin as Artemus “Artie” Gordon. (To show how much he disliked the movie, Conrad showed up at the Golden Raspberry Awards ceremony and accepted all of the Razzies that it “won”—quite a few of them.)

But enough of the negatives. A quick synopsis: a few years after the Civil War, army officer Jim West and U.S. Marshal Artemus Gordon are searching for Confederate General “Bloodbath” McGrath, who facilitated mass murders all throughout the war. In one such attack numerous freed slaves were slaughtered, including West’s parents. They first corner McGrath in a brothel, but he escapes.

In Washington, President Grant tasks the pair with locating and saving a number of scientists that have been kidnapped. He believes that McGrath is involved, and that it has something to do with the completion of the first transcontinental railroad, which is nearing completion in Utah. 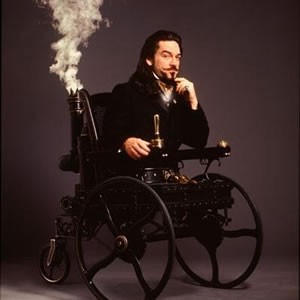 IN “SHORT”, THERE ARE “DARK” TIMES AHEAD

Clues lead West and Gordon to New Orleans, which they travel to aboard a gadget-loaded train. They’re looking for Dr. Arliss Loveless (Kenneth Branagh), a legless, ex-Confederate scientist who gets around in a steam-powered wheelchair. He is hosting a party for a number of elite guests. Here is one example of his and West’s “tasteless” repartee, which go on throughout the movie:

“Mister West! How nice of you to join us tonight and add color to these monochromatic proceedings!”

“Well when a fella comes back from the dead, I find that an occasion to stand up and be counted!”

“Miss East informs me that you were expectin’ to see General McGrath here. Well, I knew him years ago, but I haven’t seen him in a coon’s age!”

“Well, I can see where it’d be difficult for a man of your stature to keep in touch with even half the people you know.”

“Well, perhaps the lovely Miss East will keep you from bein’ a slave to your disappointment!”

“Well, you know beautiful women; they encourage you one minute, and cut the legs out from under you the next!”

THIS BAD GUY IS EVEN BADDER 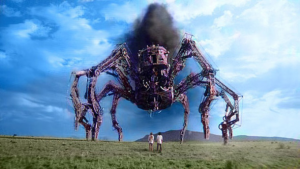 One of Dr. Loveless’s mechanized monsters.

As Loveless’s guests prepare to lynch West for a perceived indiscretion, Gordon rescues a woman named Rita Escobar (Salma Hayek), who is being held at the mansion. Gordon then saves West, and they head for their train. Rita says that her father is one of the kidnapped scientists and asks for their help. (It is actually her husband who has been taken, but since Gordon is smitten with her, she decides to play that card.)

Loveless, who employs “Bloodbath” McGrath, demonstrates a new weapon—a steam-powered tank—to his guests by using it to kill all of McGrath’s men. He is pissed at McGrath for the South’s surrender at Appomattox. Shooting McGrath and leaving him for dead, he and his guests—heads of state from other countries—set off for Utah on his own train. 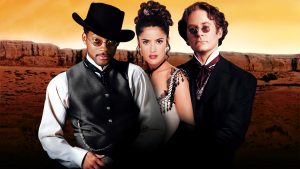 West and Gordon find McGrath who, before dying, says that Loveless had framed him for the attack that killed West’s parents and the other freed slaves. With vengeance now an added motive, they set off after Loveless, who plans to kidnap President Grant and use his vast array of deadly gadgetry—including a gigantic mechanical spider—and the armies of the other countries, to destroy the U.S. unless the states are turned over to him to be divided up at his discretion.

Yes, can you say OVER THE TOP? I’ll stop here, but I’m sure you can guess that our boys will somehow find a way to save the day. The big-screen version of Wild Wild West is not everyone’s cup of tea, but if you take it at face value, you’ll have a good time. To all of those reviewers of yore I’d like to say, “Lighten up, Francis!”