Here is an homage to the old horror films of years gone by. This post first ran in 2015. 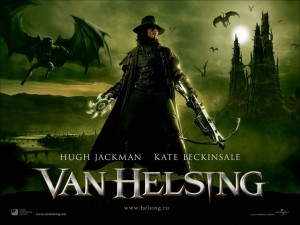 I guess the 2004 monster/horror film, Van Helsing, qualifies as a Guilty Pleasure because not a whole lot of folks liked it—especially the reviewers. (Fie on them!) It grossed over $300 million, so no problem there. This fun flick is an homage by director Stephen Sommers to the wonderful Universal horror movies of the 1930s and ’40s. It is easily one of the fifty (sixty?) movies in my personal Top Ten.

First off, there has to be an “eye candy” factor. The titular character is played by Hugh Jackman, much loved by many women. (Including my bride. So much so that for her birthday a few years ago I took her to his one-man show in L.A.) And his co-star is Kate Beckinsale (sigh…), who hunts vampires in this movie rather than plays one.

In late nineteenth-century Transylvania, Dr. Frankenstein has just brought his creature to life. (Shuler Hensley plays the monster-of-many-parts in a touching performance, I kid you not.) The good doctor even does his “It’s alive, it’s alive!” thing. His slimy servant, Igor, sells him out to Count Dracula and his three brides, who want the life-from-death technology to animate their spawn. With the Angry Villagers, armed with torches and pitchforks, in pursuit, the Monster flees with the unconscious Frankenstein to a windmill. The Angry Villagers burn the windmill down, and the Monster and his creator plummet into apparent oblivion, which pisses off the vampires. 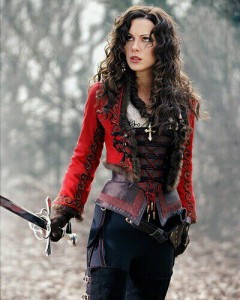 Kate knows how to kill vampires too.

Fast-forward a year. Gabriel Van Helsing works for the Vatican at destroying evil, but most folks around Europe see him as a murderer. Case in point: in Paris he kills the horrible Mr. Hyde, but when the gendarmes arrive they find Dr. Jekyll, and once again Van Helsing has to get outta Dodge quick. He checks in at the Vatican, where he is given the assignment of helping the last of the Valerious family, Anna (Beckinsale), rid Transylvania of Count Dracula. (Her brother, Velkan, has just been bitten by a werewolf, and we all know what that means.) The amnesiac Van Helsing—he has no memories of his past, which may extend back for centuries—takes along a friar named Carl (David Wenham; yeah, Faramir!) for some comic relief and great weaponry.

At the unnamed Transylvania town, the residents in general, and Anna in particular, do not trust Van Helsing. When he kills one of Dracula’s brides, the townies are even more pissed at him, figuring that Dracula will take it out on them. But Anna defends him, given that he wants to help.

When Velkan returns to the Valerious abode as a werewolf, Van Helsing drives him off. He and Anna follow Velkan to Castle Frankenstein, where Dracula is using the werewolf to try and duplicate the good doctor’s experiment. Dracula mentions that it was Van Helsing who had once killed him many centuries past. Anna cannot save her brother, who has now turned completely. Dracula animates a bunch of his dead/undead children, and these little horrors fly off to the town to feed. But within minutes their bodies explode (gross!). The experiment has failed.

After escaping from Dracula, Van Helsing and Anna wind up at the old windmill. They fall into the ruins and find the Monster, still alive. But he’s not evil, and Van Helsing cannot kill him, or allow Anna to do it, even though the Monster would rather die than let Dracula use him. Van Helsing decides to take the Monster to Rome for protection. 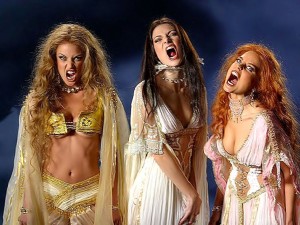 With the Monster in tow Van Helsing, Anna, and Carl flee Transylvania. Nearly to Budapest, they are attacked by the werewolf and Dracula’s two remaining brides. Van Helsing kills one of the vampires with a stake through the heart, and the werewolf with a silver bullet. But in a struggle with the latter he is bitten, and once again, we all know what that means. He only has a short time before he’s turned forever.

The remaining vampire has managed to fly off with Anna. Later, she offers a deal: Dracula will trade Anna for the Monster. The trade will be consummated at a masked ball in Budapest. Not trusting the vampires, Van Helsing stashes the Monster in a cemetery and heads off to the ball in an attempt to save Anna. 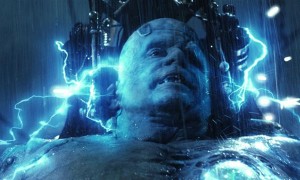 The masked ball scene is seriously creepy. There are numerous men, women, and children dancing about, every one of them a vampire. When Van Helsing swoops down from the rafters a la Douglas Fairbanks and rescues Anna, all of the partygoers turn nasty. Carl uses an ingenious weapon he created to destroy many of them. But slimy little Igor has found the Monster, and as Van Helsing and his friends watch helplessly, the poor creature is taken back to Transylvania.

I’m going to call a permanent time-out here. Plot-wise, there is still a great deal to come, and if you’ve snubbed this film until now, I don’t want to give away the rest of it. Suffice to say, there’s plenty at stake (no pun intended). Can Van Helsing, Anna, and Carl first find Dracula’s hidden ice fortress? Can they save the Monster and prevent a potload of Dracula’s dead/undead kids from coming to life? Can Van Helsing finally learn about his past—and hopefully save his future from lycanthropy? And the biggie: can they destroy Count Dracula once and for all? 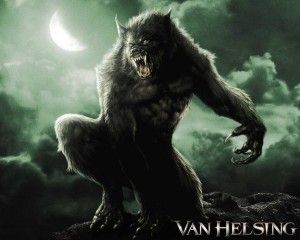 True, Van Helsing was not everyone’s cup of meat. But it was mine. And guess what, not all the critics were brutal. The late, great Roger Ebert saw Van Helsing for what is was: “At the outset, we may fear Sommers is simply going for f/x overkill, but by the end, he has somehow succeeded in assembling all his monsters and plot threads into a high-voltage climax. Van Helsing is silly, spectacular and fun.”