Take a journey to the center of the Earth for a quick “repair” job on the planet. This post first ran in 2014. It is not for lack of box office that the 2003 sci-fi/disaster flick, The Core, is a guilty pleasure, because it supposedly made back its production budget, and then some. It was, however, a critical disaster, with crummy reviews panning everything from its plot “silliness” to its bad science. Regarding the latter, The Core was voted the worst science fiction film ever in a poll taken among a bunch of scientists.

My response: piss on ’em. I totally enjoy this film and will watch it every year or two until the Mother Ship arrives.

THE ONLY WAY OUT IS IN

The “core” referred to here is the Earth’s core, which has suddenly stopped spinning, and—to use a technical, scientific term—that ain’t a good thing. Small disasters are occurring all over the planet, soon to escalate into big disasters—the destruction of the Colosseum in Rome and the Golden Gate Bridge among them. Earth’s magnetic field is deteriorating and, according to geologist Josh Keyes (Aaron Eckhart) and colleague Serge Leveque, the planet will be doomed within a year. 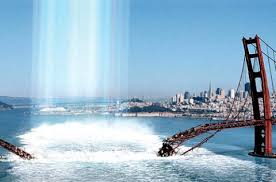 The Golden Gate Bridge is destroyed for the thousandth time.

At the same time the instruments of the Space Shuttle, returning from a mission, are affected by what is happening, and instead of approaching Edwards Air Force Base for a landing, shuttle pilot Robert Iverson is forced to take it down in the heart of Los Angeles. He’s clueless, so co-pilot Rebecca “Bec” Childs (multiple Oscar winner Hilary Swank) takes over and lands it in a dry riverbed.

Josh Keyes takes his findings to obnoxious, self-serving scientist Conrad Zimsky (Stanley Tucci), who helps him convince the government that Earth’s destruction can only be averted by getting the Earth’s core spinning again. Great—but how to do this? Josh, Serge, and Zimsky all agree that nuclear devices placed at strategic spots should do the trick. Great again. But—and it’s a big BUT—how to get the nukes to the core? 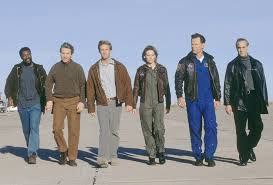 The terranauts gather in the desert.

Out in the desert, a rogue scientist named Ed “Braz” Brazzelton (Delroy Lindo) has perfected a laser device that can cut through solid rock at high speed, as well as a metal (called Unobtainium; I’m not making this up) that can withstand temperatures of a gazillion degrees. He and Zimsky used to be colleagues, till Zimsky stole his research and got rich from it. Now, with the government pumping in billions of dollars, they work together to build a ship, dubbed Virgil, to take them to the core. A computer hacker named “Rat” Finch is also brought in to control all information going out in order to avoid worldwide panic.

Shuttle pilots Iverson and Childs are brought in to take Virgil down through the deep Marianas Trench into the mantle of the Earth and on to the core. Josh, Serge, Braz, and Zimsky are on board. Things go well for a while, till they pierce a giant geode. While attempting to free themselves from it, Iverson is struck and killed by a crystal shard. Bec is now in command.

More shit hits the fan when the rear of the vessel clips a huge diamond. Serge manages to save the nuclear launch codes but dies when pressure crushes the compartment.

When they finally reach the core, an “Oh crap” moment occurs. The core is not dense enough, which means that the explosions they planned will not be able to start the core to spinning. Another plan is hatched, wherein they put the nukes in each of the ship’s compartments, release them at intervals and create a ripple effect. (Don’t ask me; I flunked science.) Of course, someone has to turn off a safety switch in an area of the ship where the temperature is 9,000 degrees, and their suits are effective up to about half that. Brazzelton volunteers and is toasted, but succeeds.

Josh and Bec have to make some tough choices.

Meanwhile, back on the surface, escalating disasters are alerting the world that something is seriously wrong. This fact, along with the report from the Virgil that Plan A won’t work, convinces the military to go with Plan B—deploy a device with the acronym of DESTINI to restart the core. DESTINI had been developed—by Conrad Zimsky—to be used a weapon that would create earthquakes under the countries of our enemies. And guess what: a DESTINI test is what caused the core to stop spinning in the first place.

Josh is convinced that a DESTINI launch will speed up the deterioration of Earth’s magnetic field and warns them not to do it, but the military assholes in charge proceed with the powering up. Computer hacker Rat smells a rat and offers to help. He hacks DESTINI and diverts all of the power to Coney Island, giving Josh and Zimsky time to initiate their desperate plan.

Spoiler alert: more weird science ensues, which I won’t even try to explain. Zimsky, who by this time has become something of a mensch, is trapped with a nuke in one of the compartments, which has already been deployed. This is one of my favorite scenes. All along, Zimsky has been doing a Carl Sagan-like narration into a tape recorder of their experiences, hoping for another book deal or TV show. As the nuke’s countdown proceeds he is doing the same thing, when he suddenly looks at the microphone, says “What the fuck am I doing?” and laughs crazily as the nuke is detonated. 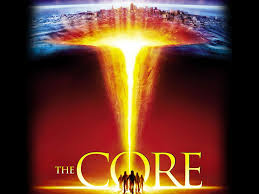 Success! The core starts rotating, and the world is saved. Josh and Bec, the last two standing, invoke some more weird science to hurtle back up to the Earth’s surface. They make their way to the floor of the ocean where, with the help of the wise Rat and a pod of singing whales, they are rescued.

Josh and Bec have only one wish, that the people of the planet know exactly what went down, and to especially learn of the heroics of their fallen terranauts. In the final scene, Rat hacks into the media of the entire planet and spills the beans. Serge, Iverson, Braz—yes, even Zimsky—will not be forgotten.

Okay, you’re right: The Core is as corny as it sounds. But as I said, I failed science, so what do I know? I enjoy it every time.