No in-between: you either love this movie, or you despise it. This post first ran in 2014. 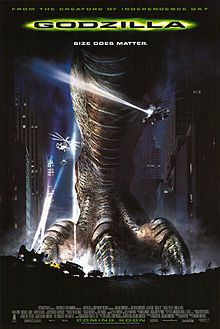 A while back I wondered why my favorite Godzilla flick—the 1998 version starring Matthew Broderick—never spawned a sequel. And for that matter, why did I even consider it a Guilty Pleasure? Wow, did my research prove an eye-opener!

One of my parameters for a Guilty Pleasure film is its box office. Godzilla (1998) grossed $380 million worldwide, nearly three times its budget. No problem there; studios usually jump at the chance to do a sequel for such a moneymaker. But the reviews were uniformly horrible, and worse, the legions of Godzilla groupies hated the film and would not even accept it as part of the Godzilla monster-verse. Japanese actors and filmmakers associated with the Toho franchise walked out of screenings. (The monster didn’t even look like Godzilla, they complained. True; it sort of resembled the creatures from the Alien films.) Theater owners joined fans in insisting that TriStar Pictures not make any sequels. They listened, and by 2003 their options for possible sequels had expired. A cartoon series on TV did continue the storyline for a short time, but that was it.

Good grief, bad reviews? (One reviewer wrote, “The script isn’t just dumbed down, it’s lobotomized.”) Fan loathing? Razzie nominations? (Even some “wins”?) Definitely, Godzilla (1998) is one of my Guilty Pleasures, because—quite frankly—I love the film. I also felt a bit vindicated to learn that it has become something of a minor cult classic. Not that it would matter. I like what I like, and as I’ve always said, I’m easily entertained. 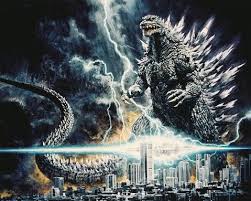 With that as its tagline, here is a quick synopsis (spoiler alert in place). Nuclear testing in French Polynesia irradiates a lizard’s nest, specifically one egg. Many years later a Japanese fishing vessel is attacked by a giant creature. The only survivor, an old man, is questioned by a mysterious Frenchman; the only word he can say is, “Gojira.” (Apparently the Japanese version of Godzilla.)

Dr. Nick Tatopoulos (Broderick) is a government scientist studying radiation’s effect on earthworms near Chernobyl. He is suddenly whisked off, first to Tahiti, then Jamaica, for his opinion on giant radioactive footprints, as well as the wreck of the fishing boat, which has huge claw marks all over it. He also meets the Frenchman, a guy named Philippé (Jean Reno), who first says that he’s an insurance investigator. Nick identifies skin samples as those of a mutant reptile spawned by nuclear testing. He also sees a tape of the sole survivor talking about Gojira.

But where is the monster going? That’s what the military wants to know. Godzilla finally shows up in New York City (where else?) and takes in the town, destroying a chunk of Manhattan. Nick suggests they lure it in with tons of fish, which they do—to no avail. But he manages to get a blood sample and determines that the creature, which can reproduce asexually, is pregnant and will likely be looking for a nest. Officials think he’s full of crap. 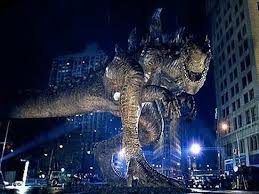 Nick’s old flame, Audrey Timmonds (Maria Pitillo), is a wannabe journalist looking for a story. After making nice with Nick, she steals his tape of the old man on the ship, and Godzilla’s origins become public, despite attempts at a cover-up. For this, Nick is fired and told to pack up. They still don’t believe him about the nest, which could produce numerous little Godzilla clones.

But Philippé, the Frenchman, believes him. Philippé is head of a secretive French unit bent on keeping his country’s role in the original nuclear tests under wraps. Nick joins this bunch as they seek Godzilla and its nest through old subway tunnels.

As Audrey sulks about screwing up Nick’s life, her cameraman, “Animal” Palotti (a hilarious Hank Azaria) talks her into going underground to find the nest and prove that Nick was right. Their path closely follows that of Nick and the French guys.

The military lures Godzilla out again, and this time they force it into the Hudson River, where well-armed submarines apparently take it out. As they celebrate, Nick and the others discover the nest—in Madison Square Garden. There are hundreds of eggs, and guess what—they begin to hatch and chase everyone through the Garden. Audrey and Animal join up with Nick and Philippé—the other Frenchmen all become lizard chow—and, after a harrowing escape, they make their way to a broadcast booth. There, Audrey gives the story of her life as she warns the city that Nick was right, that they have a lot more to worry about. Animal takes a shot of the countless little (eight-foot) monsters. The military needs to nuke the Garden, like now.

Nick and Audrey have not had a fun day.

Again making their way through the mini-Godzillas, the quartet escapes just in time. The bombs apparently destroy everything, but do they have time to congratulate themselves? Nope, because Godzilla didn’t die in the Hudson, it only got knocked out, and now it’s back, and pissed about its offspring all dead. Nick and the others commandeer an abandoned cab and tear ass outta Dodge with the pissed-off reptile at their bumper. The chase culminates atop the Brooklyn Bridge, where Godzilla is put down once and for all. Philippé, after destroying all of Animal’s film footage, fades away into the night, like a good secret agent. Nick and Audrey walk off, looking like lovebirds once again.

Back at the ruins of Madison Square Garden, one egg has survived the bombing. (Well, what did you think?) The mini-Godzilla hatches, roars at the camera—and the end credits roll.

Maybe the critics didn’t appreciate the humor in this version of Godzilla. There’s plenty of it, though not during the most intense scenes. Whatever; I don’t care. I’ll continue to watch Godzilla (1998) at least once a year until the Mother Ship arrives.