I have to seriously plead “guilty” with this film! 😊 This post first ran in 2014. 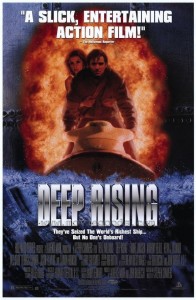 Not having felt “guilty” for a while, I dug way down into the well of duds for this 1998 action-horror flick. I mean, how could I not like a movie co-starring Famke Janssen (X-Men’s Jean Grey and a Bond villain in GoldenEye) and a bunch of giant, multi-tentacled sea worms? What more could a (weird) guy want?

With the above tag line, Deep Rising opens with a boat plowing through stormy seas on course to intercept the Argonautica, billed as the most luxurious cruise ship ever, on its maiden voyage. A guy named Finnegan (Treat Williams, in a role turned down by Harrison Ford) pilots the boat with crewman Joey and his girlfriend Leila. Seven nasty mercenaries, led by Hanover (Wes Studi, a fine Native American actor), are also on board with enough weaponry to overthrow a Third World country. Finnegan has been paid well to take them to their destination, no questions asked.

So what are they up to? Seems that a rich asshole named Canton, the owner of the Argonautica, is afraid of losing his butt on his investment and has concocted a little plan with the help of the mercenaries. He’ll sabotage the ship, the mega-rich passengers will be safely evacuated, then Hanover and his men will loot the vault before sinking the ship so that Canton can collect the insurance money. Seems foolproof, yes? 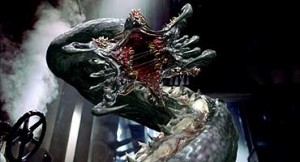 No, of course not. Just as the ship’s systems begin to shut down, the aforementioned worms rise up (conveniently) from tens of thousands of feet below and invade the Argonautica, their goal—as we later learn—to suck out the juices of all on board. (I’m not making this up.) Only Canton and a few others, including a pickpocket/jewel thief named Trillian (Janssen) survive the initial invasion.

As Finnegan’s boat nears the Argonautica it collides with a small speedboat that broke free from the cruise ship. Now damaged, the boat will require parts to effect repairs. Everyone except Leila and one mercenary climb on board the ship. The latter pair, of course, will become worm food in short order. 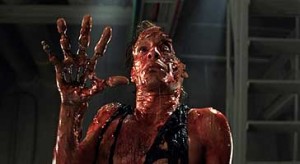 Finnegan, Joey, and the mercenaries hook up with the survivors, the majority of them eventually providing a nice buffet for the wormy, kind of octopussy things, even as they squabble amongst themselves. In a memorable—if rather disgusting—scene they come across the fluid-drained bodies of the hundreds of passengers, all stacked up in one room. How will they survive this nightmare? Who will manage to make it out alive?

Deep Rising was a box office bomb and received mostly awful reviews, so I guess that more than qualifies it as a guilty pleasure. Still, I get a kick out of watching it every once and a while—and not just for the eye candy. You can be the judge as to its merits.