Last week I mentioned that a new Conan movie with the Governator was doubtless NOT going to happen. Such is life. Here is a 2014 post about the last time he appeared as the indomitable barbarian. 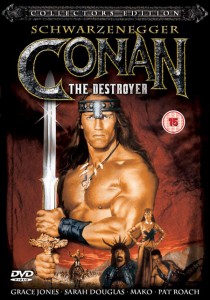 Over two years ago I wrote a “Guilty Pleasures” post for Arnold Schwarzenegger’s first screen romp as Conan the Barbarian in 1982. Since that time this particular post has received more views than any of the others I’ve done on my blog. Must be a lot of Conan—or Arnold—fans out there. At the time I also hinted at a post about Arnold’s 1984 sequel, Conan the Destroyer. The time has come to pay off on that.

While Conan the Barbarian is a true guilty pleasure—I love the film—I had to stop myself short of referring to its sequel as a guilty displeasure. There is much wrong with Conan the Destroyer—a good deal of which has to do with an acting-challenged cast. (Some even make Arnold look good.) But what the heck, it’s mildly entertaining, and it’s a sword & sorcery flick, and there has never been enough of those to go around.

The story opens with Conan, author Robert E. Howard’s brooding Cimmerian, mooning after his lost love Valeria, who died in the first film, while fellow thief Malak (the always annoying Tracey Walter) sizes up their loot from a recent heist. The nasty Queen Taramis of Shadizar (Sarah Douglas, even nastier as über-villain Ursa in the old Superman films) approaches with her head guardsman, Bombaata (the acting-challenged Wilt Chamberlain, who should’ve stuck to basketball). She wants Conan to accompany her niece, Princess Jehnna, on a quest to retrieve first a gem, then a horn. For that, she’ll bring Valeria back to life. Right… 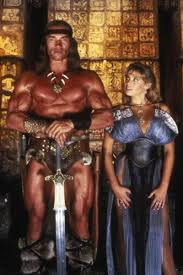 Seems like a good deal, though Conan never thinks to ask Taramis why she can raise up the dead but not take a trip with her niece. (Conan the Gullible?) They travel to the queen’s palace, which drips with intrigue. Taramis orders Bombaata to kill Conan after the horn is retrieved, and then return dear little Jehnna to the palace, where she will be sacrificed in a ceremony to bring Dagoth, the Sleeping God, back to life so that he can rule the world. Indeed, foul play abounds.

Sheltered from men and in the throes of raging hormones, teenager Jehnna (a terminally cute and minimally acting-challenged Olivia d’Abo) is kind of whiny and pushy, but she also has the hots for Conan. (Oy!) On the journey they pick up a wizard named Akiro (Mako, reprising his role from the first film) and an amazon warrior named Zula (the wild, acting-challenged Grace Jones). First stop: an ice fortress in the middle of a lake, where Thoth-Amon, a wizard, possesses the gem that they seek. They succeed, though not before Conan, in a cool scene, does battle with the sorcerer in a man-ape guise, inside a weird roomful of mirrors. 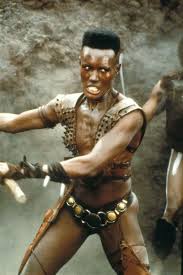 The six next travel to a temple where the horn of Dagoth is guarded by a bunch of religious whackos. Even when they’re ambushed by the queen’s men on the way, and Bombaata appears to take their side, Conan (the Gullible) doesn’t figure it out. At least, not until the horn has been retrieved and, as they escape through a tunnel after killing half of the whackos, old #13 brings a ton of rocks down on him and the others and flees with Jehnna.

Their number now reduced to four after they dig out, the band reaches Shadizar just as the “ceremony” begins. Jehnna has finally figured out that her aunt is a psycho bitch, but maybe too late, because they’ve stuck the horn on the forehead of Dagoth—at this point he looks like a statue of a spaced-out guy—and as soon as he begins to move, Jehnna will be toast at the hands of the high priest’s knife.

Conan kills Bombaata, and his little band does the same to a bunch of other guys. They arrive in the throne room just as Dagoth begins to move. Zula impales the high priest before he can kill Jehnna, and everything goes to hell. Dagoth transforms into a hideous, pissed-off monster. (André the Giant; anybody want a peanut?) It kills Queen Taramis (cheers abound!) but is in turn killed by Conan who, in a gross scene, rips its horn out.

The final scene, done with great solemnity (I don’t know how the actors kept a straight face), has now-Queen Jehnna appointing Zula her Captain of the Guard, Akiro her advisor, and Malak her court jester. She offers Conan the chance to rule Shadizar with her as king, but the barbarian, possibly fearing statutory rape charges, declines and heads out to seek his own kingdom. Maybe he wasn’t so gullible after all.

A closing voiceover promises another Conan story, but that didn’t happen, as Arnold went on to play numerous other entertaining parts, including his starring role as Governator of Calee-fornia. And as I said, the proposed sequel now seems dead in the water. I guess we’ll see. I do know that he is currently filming a new Terminator movie—with Linda Hamilton, no less! Maybe the action takes place in a retirement community.  😊