A huge money-making film, despite its terrible reviews. This post first ran in 2017. 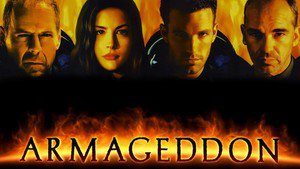 The 1998 sci-fi/disaster flick, Armageddon, grossed well over half a billion dollars—so why is it a Guilty Pleasure? Doubtless because its reviews were uniformly awful. I mean, here is what Roger Ebert had to say: “The movie is an assault on the eyes, the ears, the brain, common sense and the human desire to be entertained.” But, as usual, I don’t care. “Assault me…oh please, assault me!” I get a huge kick out of its improbable plot.

EARTH—IT WAS FUN WHILE IT LASTED

With that tagline, Armageddon opened at about the same time as another “Asteroid Hits Earth” movie, Deep Impact. Hollywood does like its overkill. Deep Impact fared better with the critics (not by much) and also did well as the box office, though not as well as Armageddon. That might’ve had to do with its star power, as well as its often humorous approach to a story about the possible end of life on Earth as we know it. We’re talking Bruce Willis, Billy Bob Thornton, Liv Tyler, Ben Affleck, Owen Wilson, among many others. 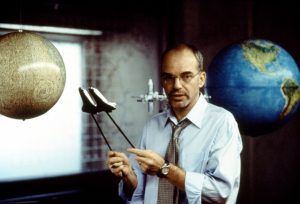 NASA’s plan for destroying the asteroid is rather desperate.

After meteor showers pound New York City and environs and destroy Shanghai, scientists discover that the meteors were propelled ahead of a Texas-sized asteroid that will hit the Earth in under three weeks. (What, they couldn’t see that coming any sooner?) Whoa, extinction event! NASA project manager Dan Truman (Thornton) comes up with a plan to fly a couple of shuttles to intercept the asteroid, land on it, have a crew dig down 800’ and plant a nuke at the bottom. That will split the thing in two, and both pieces will miss our planet.

Harry Stamper (Willis), the best deep-sea oil driller in the world, is recruited by Truman for the job. Stamper’s rowdy, outrageous crew is led by A.J. Frost (Affleck), who is having an affair with Stamper’s daughter, Grace (Tyler). Much of the humor comes from this bunch, which includes the rubber-faced Steve Buscemi. 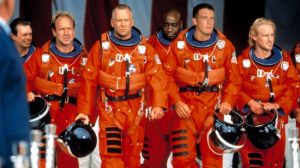 A bunch of non-astronauts head into space.

After a rather hasty training period (don’t astronauts usually train for many months?), the two shuttles head into space with the clock ticking. They plan on refueling at a Russian space station (nothing like an extinction event to bring countries together) and then doing a slingshot maneuver around the moon to come up behind the asteroid. But because shit always happens (especially in movies), they cannot finish refueling before an accident causes the station to blow up. Off they go, taking the Russian cosmonaut with them.

More shit happens as the two shuttles approach the asteroid, causing one of them to crash land on the rock. A.J. and two others survive, and they make their way to Stamper in a land vehicle called an Armadillo, which is used in the drilling process. Stamper will need all the help that he can get, because his crew is breaking drill bits while trying to penetrate the hard rock, and when they hit a gas pocket their Armadillo is destroyed, and one of his men is killed. Things are looking bleak up there, while back on Earth another meteor shower takes out Paris…

Okay, I’ll stop here, so no need to issue a spoiler alert. A whole lot more shit is going to happen atop this asteroid before the improbable conclusion, and for sure you’ll need to suspend any logic to see how it all turns out. Armageddon is Hollywood at its excessive best, and it may not be everyone’s cup of tea, but I always get a big kick out of it. I’ll be watching this film every couple of years or so, until the Mother Ship arrives…hopefully not at the rear of any meteor showers.