This fine film focuses on an interesting—if misunderstood—profession. I first wrote about it in 2016.

The Ghost Writer, a 2010 political drama directed by Roman Polanski, stars a young Obi-Wan Kenobi (wait, I mean Ewan McGregor) as “The Ghost.” He is never referred to by name, an indication that there will be something “different” about this meticulously paced and intriguing film. 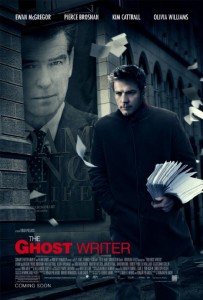 READ BETWEEN THE LIES

The Ghost, a Brit, is hired by a publishing house to polish the already written memoirs of popular but controversial ex-Prime Minister Adam Lang (Pierce Brosnan). Lang’s previous ghostwriter, Mike McAra, had recently drowned in what was reported to be an accident or suicide. Even a huge fee does not prevent The Ghost from being a bit leery about the assignment. McGregor plays the entire film with a “What the hell did I get myself into?” look on his face. When he’s mugged on the street shortly after the meeting at the publisher’s London office, his concern is further reinforced. All that the muggers took was a manuscript he’d been carrying that had nothing to do with Lang.

The Ghost travels to America, where Lang is staying at a secure compound on Martha’s Vineyard. He meets Lang’s wife, Ruth, and his personal assistant—and maybe mistress?—Amelia, a tough lady who insists that Lang’s manuscript never leaves the house.

As The Ghost begins his work, Lang’s former Foreign Minister, Richard Rycart, publicly accuses Lang of authorizing the illegal seizure of suspected terrorists and giving them to the CIA to be tortured. He will likely be prosecuted by the International Criminal Court if he leaves the U.S. As swarms of protesters and media gather around the compound, Lang flies to Washington to seek support. The Ghost, who had been staying at a hotel in a nearby town, is told to move into the house in the compound. He is given the room that had been used by Mike McAra, his predecessor.

The Ghost comes across an envelope that McAra had hidden, which contains some old photographs of Adam Lang and others in college. There is also a phone number, which he calls. The man that answers is Richard Rycart. Apparently McAra learned something that he was not supposed to and paid the ultimate price. The Ghost disconnects without saying anything, but Rycart now has his cell number. 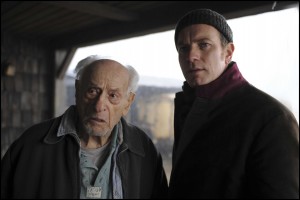 The Ghost learns some startling information from the old man.

When he takes a bicycle ride around the island, The Ghost runs into an old man near the beach where McAra’s body washed up—he’d supposedly fallen off a ferry. The old man says that the current could never have carried the body from where the ferry traveled. He also says that a reclusive woman farther up the road mentioned that she’d seen flashlights on the beach that night. The Ghost wants to talk to her, but the old man says that she had an accident and is in a coma.

Later, The Ghost is drinking wine with Ruth, who tells him that her husband never had political ambitions—he’d aspired to acting—but she’d managed to urge him on, and she’d been his primary advisor ever since. When The Ghost tells her the old man’s story, she freaks and rushes out for a walk on a cold, rainy night. The puzzled Ghost goes to bed, but Ruth shows up in his room and confides that McAra and Lang had a nasty argument the night before his death. Hmm, was Lang responsible for the ghostwriter’s death? Ruth then jumps his bones. 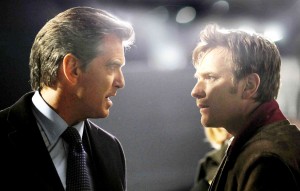 The ex-Prime Minister and The Ghost have differing opinions.

The next morning, deciding that he’s had enough of this crazy business, The Ghost takes the Lang manuscript with him and borrows one of the cars in the compound to drive to the ferry. McAra had used this car last, shortly before he died. There are pre-programmed directions in the GPS, and not knowing how to cancel them, he decides to duplicate McAra’s ride.

The directions take him to the mainland home of Professor Paul Emmett, a renowned American educator who had attended Cambridge in England years earlier, and who is in some of the old photos with Adam Lang. Emmett professes only a cursory acquaintance with Lang, but while he is initially personable, he becomes evasive when The Ghost mentions that McAra’s last ride brought him to Emmett’s house.

Ushered out rather curtly, The Ghost realizes that at least two cars are following him. He eludes them and drives back to the ferry, where one of the cars catches up. Leaving his vehicle on the ferry, he checks into a nearby motel.

What to do now? Desperate, he calls Rycart and asks for his help. While waiting for Rycart to arrive, he does an Internet search on Paul Emmett that links his think tank to a military contractor. (Yeah, duh.) There are also some references connecting Emmett to the CIA. 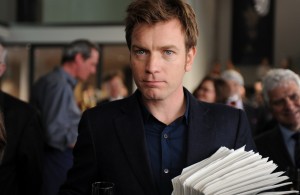 The Ghost thinks he might have figured it out…

When Rycart arrives, he tells The Ghost that McAra had given him documents connecting Lang to the torture of prisoners by turning them over to the CIA. He also indicates that McAra had found something important in the “beginning” of the manuscript. They look it over closely but cannot find a thing. The Ghost mentions the Cambridge connection between Lang and Emmett; Rycart says that Lang’s decisions while in office always seemed to benefit U.S. interests.

Lang, on his way back from Washington, calls The Ghost and says that he’ll pick him up at a nearby airport so they can fly back to Martha’s Vineyard. During the flight on the private jet, The Ghost accuses Lang of being a stooge for the CIA while in office. A screaming match ensues as Lang denies the allegations…

No spoiler alert here. A great deal happens in the latter part of The Ghost Writer, and the revelations are shocking. If you’ve seen it, you know what I mean. If you haven’t, it is well worth checking out. And if you’re a ghostwriter, it may make you think twice about your next assignment.