Throwback Thursday: Films About Writers—In The Heart Of The Sea 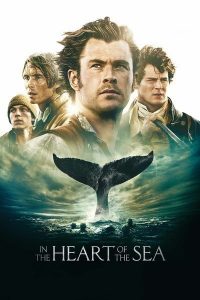 The famous White Whale of literature is grounded in fact. This post first ran in 2017.

Okay, calling this 2015 historical adventure a film about a writer may be a reach. Then again, one of the primary characters is Herman Melville, author of Moby Dick, so it may not be too far out after all. The movie is based on the non-fiction book, In The Heart Of The Sea: The Tragedy of the Whaleship Essex, by Nathaniel Philbrick, and it is said that Melville drew his inspiration for his classic novel from the unimaginable experiences of these New England whalers in 1820-21.

HAUNTED BY THE PAST

The story begins in 1850 when Melville, who had worked on a whaling ship some years earlier, is mapping out his idea for Moby Dick. He arrives in Nantucket to interview a man named Thomas Nickerson who, as a teenager, had served as a cabin boy on the ill-fated whaleship Essex. Now in his forties but looking a lot older, Nickerson has been tormented by memories from the past. He has never talked to anyone about it, not even his wife. But upon her urging, as well as the offer of a generous fee from Melville, he finally opens up. Scenes of the two men talking are interspersed throughout the film. 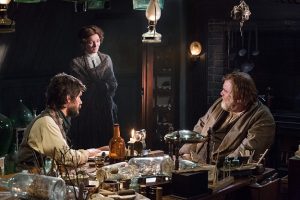 Thomas Nickerson (r) stuns his wife and Herman Melville with his story about the Essex.

In 1820, with the whale oil trade at its height worldwide, a young but experienced whaler named Owen Chase (Chris Hemsworth) is hired as first mate aboard the whaleship Essex. He should have been appointed captain, but the owners instead went with an inexperienced but well connected mariner named George Pollard. Their mutual antagonism begins when Pollard orders the ship into a bad storm over Chase’s objections, damaging it. Despite this, they decide to put their conflicts aside, repair the vessel and go after the lucrative oil. They soon kill their first bull sperm whale, which leads them to believe that their luck is going to change.

BAD LUCK, AND A BAD CALL

But the Atlantic yields little else, and after three months the ship sails around Cape Horn and into the Pacific. Stopping at a port in Ecuador, they meet a Spanish whaling captain. He and his crew, he says, found the so-called “Offshore Grounds,” two thousand miles to the west, where whales abound. But a huge white whale attacked his ship, destroying it and killing many of his men. He calls the whale a demon. 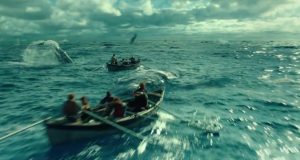 The “Offshore Grounds” hold much promise.

But Chase and Pollard think the guy is full of crap. They aim the Essex west, and when they finally sail near the area they are stunned by the countless whales that swim there. They happily launch the whaling boats and row toward the pod but are attacked by an enormous albino bull sperm whale, just as the Spaniard described. (Think Moby Dick.) Their boats are damaged, so they frantically row back to the Essex. (The scenes of the whale breaching as it attacks them are awesome.)

Chase harpoons the whale from the deck of the Essex, which only serves to further piss it off. It kills a couple of crewmen while tearing the boat in half. The crew abandons the sinking ship and heads east in three whaling boats, their supplies limited. The white whale follows them the entire time, attacking the boats once. 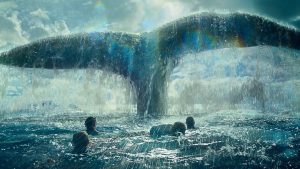 The white whale attacks the boats.

Many weeks later, with their food nearly gone, they come across a small, bleak island and are rejuvenated by eating birds’ eggs and fish trapped in shallow inlets. But when Chase discovers the skeletal remains of other sailors, he realizes that the island cannot sustain them for long. Four men choose to remain (three will eventually be rescued), while the whaling boats again set out to sea.

Here, the older Thomas Nickerson pauses in his relating the story to Herman Melville, because he knows the hardest part is yet to come. His wife encourages him to go on.

One of the crewmen had been ill on the island, and he dies shortly after they head back out to sea. The others, now starving, make the reluctant decision to cannibalize him. Eventually, they will do the same with others, and they will also draw straws to see who among the living will be sacrificed. (In the film, Pollard draws a short straw, but his cousin, one of the crewmen, instead kills himself to feed the others.) 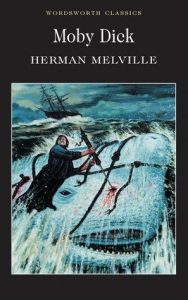 In a powerful scene the white whale returns, and Chase raises a harpoon. The whale breaches, and they make eye contact. Chase lowers the harpoon; the whale swims off and is never seen again.

By this time the three boats have become separated, and one is never heard from again. Pollard’s boat is rescued by a passing ship, while Chase’s boat continues to drift. It eventually reaches land, and the men are able to return to Nantucket. The ship’s owners want the incident covered up, but Chase refuses to lie for them, while Pollard, who had been an asshole throughout, reveals the truth during an inquiry.

Telling the tale has proved cathartic for Thomas Nickerson, and Herman Melville has gotten what he wanted; perhaps even more. He leaves Nantucket, and the last thing we see is him writing the first line of Moby Dick, his new novel: “Call me Ishmael.” 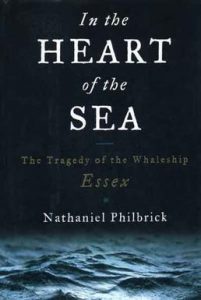 Melville hardly made any money on Moby Dick, or for that matter, his total body of work. (Sound familiar, writers?) Much of the novel’s success came long after he died.

As for In the Heart of the Sea, it did not fare well at the box office, and the reviews were so-so. Perhaps all the people who suffered through having to read Moby Dick in high school decided to stay away for just that reason. Yes, at times this film is hard to watch, but I found the story fascinating and highly recommend it.