This is one story that will stay in your thoughts long after reading or viewing it. I first presented this post in 2015.

“Books are life” may well be the theme for young protagonist Liesel Meminger in the 2013 drama, The Book Thief. There is only one problem: at the start of the story, Liesel cannot read or write. 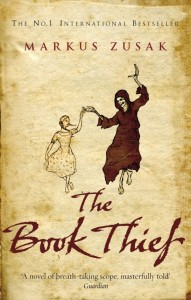 The Book Thief was adapted from the novel of the same name by Australian author Markus Zusak. Published in 2005, the award-winning story became an international phenomenon and spent over four years on the New York Times bestseller list.

With the tagline “Courage Beyond Words,” the story opens with Liesel, her mother and younger brother on a Munich-bound train in 1938. The brother dies, and at his funeral Liesel picks up a book that has been dropped there—a manual on grave digging. She is then handed over to foster parents Hans and Rosa as her mother, a Communist, has to get out of Nazi Germany fast.

Hans is a kindly man and treats Liesel well; Rosa is a witch at first, though she will eventually come around. Liesel also makes an impression on a neighbor boy named Rudy, who accompanies her to school on her first day. When the teacher asks her to write her name on the blackboard, all Liesel can do is make three Xs. Other kids ridicule her, especially a bully named Franz. When the feisty Liesel kicks the crap out of Franz, Rudy is totally smitten.

Seeing that Liesel can’t read, Hans begins teaching her. They use the book that she brought with her, and soon Liesel knows everything about digging graves. She also begins reading anything that she can find. 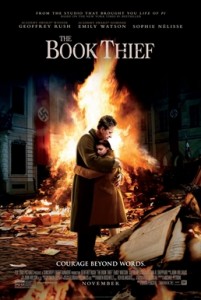 To avoid conflict, Liesel and Rudy attend a book-burning event with the Hitler Youth movement. Franz, one of the leaders, forces them to throw books onto the bonfire, which sickens Liesel. Afterward, Liesel salvages a book that survived the flames. A woman named Ilsa sees her do this. Ilsa is the wife of the mayor, a Nazi stooge. Liesel is afraid she’ll be reported.

Foster mom Rosa is a laundress whose patrons include the mayor. When she tells Liesel to deliver a load of laundry to the mayor’s wife, the girl nearly freaks. But Ilsa, who detests the Nazis, leads Liesel into their library and urges her to read to her heart’s content—just don’t let her husband find out. Most of the books belong to Ilsa’s son, who is missing and presumed dead.

One day the mayor catches Liesel reading and chases her out; he also fires Rosa. Undaunted, Liesel breaks into the house a number of times and “borrows” books to read elsewhere. 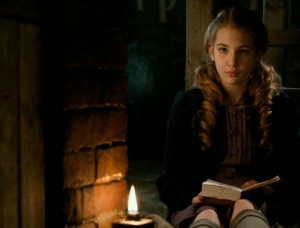 All over Germany, violence against Jews has begun to escalate. A young Jewish man named Max, whose father had saved Hans during World War I, seeks shelter from the Nazis, and he is taken in by Hans and Rosa. He shares a room with Liesel, and they become friends. At holiday time he gifts her with a journal, and she begins writing in it. Later on Max is moved to the basement, where he has more room, but he becomes seriously ill from the cold and the dampness. Liesel helps him recover by reading to him.

Rudy follows Liesel one day as she goes to “borrow” a book and learns her secret, which he swears to keep to himself. He also sees Max’s name in her journal and guesses that her foster family is harboring a Jew. When Franz the bully tries to take the journal, Rudy throws it into an ice-choked river. He later returns and retrieves it, risking his health. Liesel now knows that she can trust him implicitly with any secret.

When some local Nazi stooges show up and ask to see Hans and Rosa’s basement, they manage to hide Max. Hans fears that they have been found out, but the Nazis were just checking the basement out for use as a bomb shelter. Still, the family is unnerved. 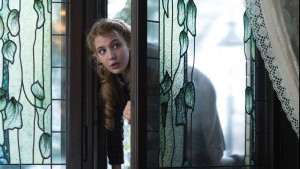 Liesel goes to “borrow” another book.

Soon after, Hans see the police arresting one of his neighbors for being a Jew. By this time the war has begun, and Jews are being rounded up and sent to “work camps.” Hans tries to intervene for his friend but only succeeds in making himself and his family more “visible” to the Nazis. Max knows he must leave in order to protect them. But even though he does, the middle-aged Hans in conscripted into the German army.

One day, on her way home from school, Liesel watches the Nazis forcibly marching a long line of Jews through the streets. Believing that she sees Max she screams his name, but the soldiers throw her to the ground. Rosa takes the distraught girl home where, a few days later, Hans returns from the war, badly injured…

I’m not going to call a spoiler alert, but instead stop here. Earlier, I described The Book Thief as “heartwarming and heart-wrenching,” and it surely is—with some of the most heart-wrenching scenes yet to come. This is truly a tale of courage, and young protagonist Liesel Meminger is an inspiration for the ages.