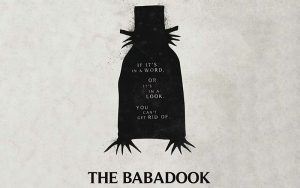 With Halloween nearly upon us—though a bit subdued in this insane year—here is a post about one of the scariest movies EVER. It first ran in 2017.

When William Friedkin, director of The Exorcist, proclaims, “I’ve never seen a more terrifying film,” you have to take notice. He was referring to the 2014 Australian psychological horror film, The Babadook, and I definitely agree with his assessment. This one is designed to cause more than a few sleepless nights.

Speaking of sleepless nights, six-year-old insomniac Samuel Vanek has a lot of them. He is convinced that a monster lives in his house and has even constructed weapons to do battle with it. His behavior is enough to drive his poor mother crazy. 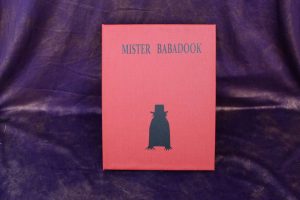 Amelia Vanek (Essie Davis) is a weary young widow tasked with raising Sam after her husband, Oskar, died in a car crash on the day they drove to the hospital with Amelia in labor. With her son’s seventh birthday approaching, we can see that she has not dealt well with her husband’s death after all this time, and Sam’s weird behavior is not helping matters. Still, she calms his monster fears by reading child-friendly stories to him every night.

Sam’s issues extend to his school, and Amelia is finally forced to take him out and stay home with him. One night, Sam asks her to read him a pop-up book titled Mister Babadook, which he found in his bookshelf. Amelia has no idea how this book got there. It is a disturbing story with a dark, creepy-looking character who insists that you “let it in.” if Sam wasn’t screwed up enough beforehand, the imaginary monster that he fears now has a name and a shape. More sleepless nights are in store for both of them.

DON’T LET IT IN 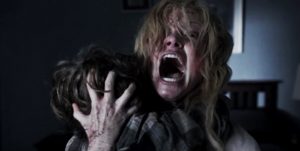 Is Amelia protecting Sam…or trying to kill him?

All kinds of weird things now occur around the house, including the discovery of glass shards in their dinner. Sam is convinced that the Babadook is doing it all. Amelia, distraught, rips up the book and throws it out.

Sam and Amelia attend a birthday party for Amelia’s niece, a snotty little kid who teases Sam about not having a dad. Sam goes ballistic and pushes her out of a treehouse, injuring her. Amelia’s sister asks them to leave. On the drive home Sam sees the Babadook inside the car and has a seizure. His doctor allows Amelia to give him sedatives, providing her with a brief reprieve from his behavior.

The Mister Babadook book, all taped back together, soon turns up on Amelia’s front step. Freaking out, she turns the pages and finds a warning that the Babadook will only grow stronger if she continues to deny its existence. There are also new pop-ups showing Amelia killing their dog, then Sam, and finally herself. This is seriously messing with her. Oh, ya think? 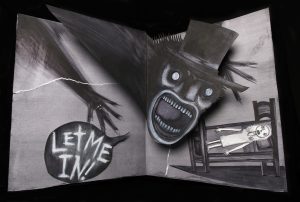 Subsequently Amelia tosses the book on the barbie and burns it. After receiving a creepy phone call she hurries to the police station to report a stalker. She tells them about the book, but since she cannot show it to them, the cops think she’s a bit mental. When she sees the Babadook’s black suit hanging on the back wall of the station she tears ass out of there…

There is still plenty to come, but I chose to stop here and not spoil it for those of you who have not seen The Babadook. All I can say is, keep a Linus blanket handy for the many “Oh crap!” moments ahead. Rotten Tomatoes compiled nearly 170 reviews for this film, 98% of which were positive, the website’s third-best reviewed film of 2014. The Babadook is a little-known gem in the horror universe.