Writers can definitely relate to what goes through this “character’s” head. I first presented this post in 2018. 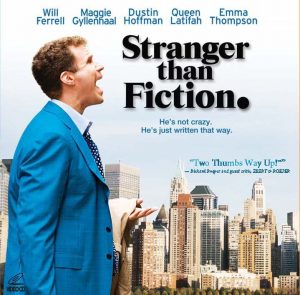 Harold Crick is an IRS agent who leads a boring life. Harold is also—not by choice—a character in a book, and that character is slated to die at story’s end.

A LIFE BY THE NUMBERS

Stranger Than Fiction, a 2006 fantasy/comedy/drama, stars Will Ferrell in an understated role (for him) as Harold, who is so good with numbers that he can multiply 11,479 x 654 in his head and give you the answer in seconds. (It’s 7,507,266, BTW.) He wakes up at the same time every day, brushes his teeth with the same number of strokes, takes the same number of steps to the bus stop and always arrives just as the bus is pulling in. Borrr-ing.

But Harold’s life changes one day when he begins hearing a voice—female and British—narrating every move he makes. No one else can hear this voice, and it is really starting to piss Harold off. Even worse, when he arrives at the bus stop one morning, he notices that his watch—which rules his life—has stopped. He asks a guy on line for the time, and as he resets the watch, the omniscient narrator in his head says, “Little did he know this simple, seemingly innocuous act would result in his imminent death.” Holy crap! 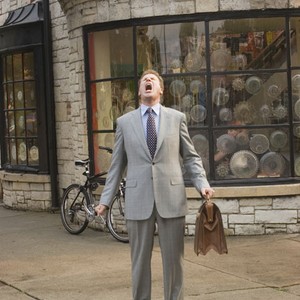 Harold has no idea who’s narrating his life.

The voice belongs to novelist Karen Eiffel (Emma Thompson), whose books have garnered both literary and commercial success. At this point she has not written anything in a decade, and her publisher is quite perturbed. The good news is, the eccentric author has returned to her typewriter and is writing a book about a boring IRS agent named Harold Crick.

Karen has gotten to the point where the omniscient narrator has warned readers about Harold’s impending death, but once again writer’s block has taken over. She has no clue about how Harold will meet his end. The publishing house sends her an assistant, Penny (Queen Latifah), to noodge her along, much to her chagrin. Karen drags Penny all over town as she creates potential scenarios for Harold’s demise.

Harold, whose life has begun to unravel, goes to a shrink with his problem, and the guy diagnoses him with schizophrenia. Bullshit, Harold thinks. Another guy suggests that he go talk to an expert in literature, so Harold seeks out a university professor, Jules Hilbert (Dustin Hoffman), and tells him what is going on. Jules first thinks that Harold is a bit off, but when he recognizes some literary devices in the narration, his interest is piqued. They’ll need to identify the author by figuring out if Harold’s story is a comedy or a tragedy. At wit’s end, Harold agrees. 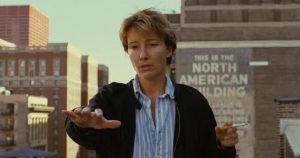 Karen contemplates her main character dying by falling off a building.

Harold has been auditing a feisty bakery/coffee shop owner named Ana Pascal (Maggie Gyllenhaal), who paid all but 22% of her taxes to protest government inefficiency. He is smitten by her, and as she begins to thaw she bakes him some cookies. He refuses to take them, saying that it might be misconstrued as a bribe. She tells him to get lost, and he marks down this part of his story as a tragedy.

Harold reports this development to Jules, who suggests that he try ending the story by having him do nothing for a day. In his apartment the next day, Harold won’t even answer the phone or change channels on the TV. As he sits there, a wrecking ball takes out one of his walls and nearly injures him. A demolition crew has come to the wrong address. The story is still moving along, and Jules tells Harold that since he cannot control the plot, he might as well accept his imminent death and take advantage of the time remaining to him. 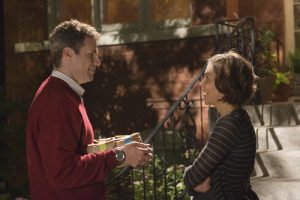 Harold tells Ana how he feels about her.

Harold, taking some vacation time, has temporarily moved in with a casual acquaintance from work and finds that he enjoys developing their friendship. He buys a guitar and begins learning how to play, fulfilling a lifelong dream. He boldly tells Ana how he feels about her, and in one awesome scene he plays the guitar and sings the one song he knows as Ana watches him, mesmerized. She subsequently jumps his bones.

Harold reports back to Jules that his life has turned from tragedy to comedy. Jules has compiled a short list of literary authors who might be narrating Harold’s story. The professor had been watching a TV show for book lovers, and at the moment the moderator is interviewing Karen Eiffel. When Harold hears her voice, he identifies it without a doubt as the one in his head. Jules, who did not have Karen on his list, knows her work quite well. Whoa, tough luck, he tells Harold. All of her past works end with the main character meeting a tragic death. 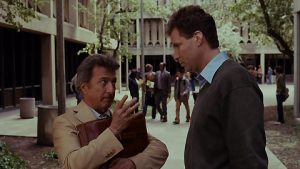 Jules doesn’t have the best news for Harold.

Harold loves his new life and is devastated that it could end. Accessing IRS records, he sees that Karen lives in the same city. He plans to confront her to see if she’ll change the story. But how will she react when a character of her own creation shows up at her door?

I’ll stop here, in case you haven’t seen this critically acclaimed (and money-making) film. Yes, Stranger Than Fiction is quite different from the usual Hollywood fare, but I say that in a positive way. With its excellent cast and unique storyline, it is worth checking out—for writers and non-writers alike.