Throwback Thursday: Exploring The Planet Of The Apes—Part Three

How did such a popular franchise wind up in “development hell” for decades? This post first appeared in 2017. 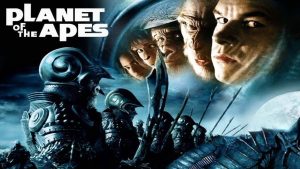 After the “craze” died down following Battle for the Planet of the Apes in 1973, not a whole lot happened for a long time regarding the series’ return to the big screen. Plans for a remake of the original began in the late ’80s but would wind up in “development hell.” Finally, with Tim Burton as director, the film went into active development as the new millennium approached. The result: well, let’s say it was “mixed.”

Maybe a “re-imagining” rather than a remake might be a better term for this film. The story begins in 2029 on Oberon, a U.S. Air Force space station, where primates are trained for space exploration. Pilot Leo Davidson (Mark Wahlberg) works closely with a chimpanzee named Pericles. When an electromagnetic storm approaches, Pericles is sent out in a pod to explore it, but he promptly disappears. Leo goes after him, and his pod is sucked into a vortex. He crashes on a planet (not Earth) about three thousand years in the future.

Like the original, apes dominate this world and humans are farther down the scale—though not that far, because they can speak and seem reasonably intelligent. Leo and a bunch of other humans are captured and taken to the ape city. The “bad guy” is a chimp, General Thade (Tim Roth), who looks terminally pissed. (His dying father is—get this—played by Charlton Heston, in a cameo.) The “good ape,” Ari (Helena Bonham Carter), protests the treatment of humans. She buys Leo, and a female slave named Daena, in order to protect them. For comic relief (this is a Tim Burton film, ya know) we have a slave trader named Limbo (Paul Giamatti). 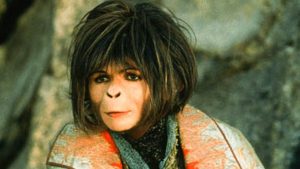 Leo, of course, wants out. He and Daena escape with Ari’s help, and he retrieves some equipment from his sunken pod. Picking up a signal from what he feels certain is a ship sent to find him, Leo sets off in the direction of Calima, a forbidden temple of the apes, home to Semos, their god. The nasty Thade follows them with his army.

Calima, it turns out, is the space station Oberon, or what is left of it anyway. Leo will learn that it was sucked in by the storm and crashed on the same planet, only three thousand years earlier. Why is it called “Calima?” Leo sees the letters on a dusty wall, and when he rubs off the dust the sign reads, “Caution, Live Animals.” He also learns that the apes on board, led by one named Semos, mutinied and took control of Oberon. These were the ancestors of the intelligent apes.

Outside, many humans have gathered, believing Leo to be their savior or something. Thade and his army arrive, and the battle begins. But it stops when a pod appears in the sky. It is Pericles, only now showing up. Apes and humans alike believe this is Semos. Leo is not about to tell them otherwise. 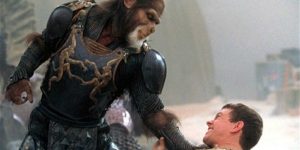 Leo and Thade battle inside the ruins of Oberon.

After a one-on-one fight inside Oberon between Leo and Thade, the general is trapped in a room. Leo still wants out, even though he would be like a god here. He gives Pericles to Ari and sets off in the chimp’s pod. He travels back through the same vortex and arrives in Washington, DC, crash landing at the Lincoln Memorial. Did I say Lincoln? When he looks up at the statue he sees an image of General Thade, a WTF! and OMG! moment combined. Stunned, he walks down the steps toward an army of cops and reporters—all of them apes. End of story.

I like Mark Wahlberg, and this is a watchable film, but to be honest, the storyline in general, and the nebulous ending in particular, left a lot of people scratching their heads. Critics panned it, and despite doing great at the box office the filmmakers decided not to make any sequels. Once again the series languished—though only for a decade this time.

While I will always have great affection for the original 1968 film, let me state unequivocally that this reboot and its sequel(s) are brilliant. Much of that assessment has to do with the work of Andy Serkis—the best actor in the world who you never see for real on-screen—as Caesar. (Ditto his roles as King Kong and Gollum.) Although it is not considered a remake, Rise of the Planet of the Apes bears many similarities to the fourth film in the original series, Conquest of the Planet of the Apes.

Will Rodman (James Franco) is a scientist at San Francisco-based Gen-Sys, where he is testing a drug that may cure Alzheimer’s disease. He administers it to a chimpanzee, increasing its intelligence big-time. But the chimp goes ape (sorry) and has to be destroyed, setting back the program. However, it wasn’t the drug; the chimp had given birth to a baby and was only protecting it.

Will takes the infant home, where he and Charles (John Lithgow), his father, name it Caesar and decide to raise it. Because Charles suffers from dementia, Will tests the drug on him, and the results are outstanding. Caesar is given an attic room, and they seem like one happy family. Later, Will drives Caesar past Gen-Sys and tells the chimp about his origins. At three years old, Caesar enjoys an outing in Muir Woods, across the Golden Gate Bridge. 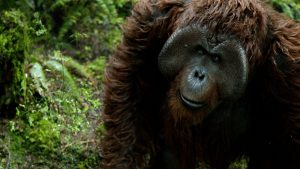 A few years later, Charles’s dementia returns; the drug has a short shelf life. Will and his colleagues go back to the drawing board. When a confused Charles is confronted by an angry neighbor, Caesar comes to his defense and injures the man. He is taken to a primate shelter.

The next version of the drug is a powerful aerosol. Will takes some of it home to test on his father, but by this time Charles is too far gone and does not want to be treated. He dies the next morning.

At the shelter Caesar is treated badly by the other apes and is tormented by an asshole attendant named Dodge. (Tom Felton; yeah, Draco Malfoy!) With the assistance of a gorilla he confronts the alpha chimp and relieves him of that distinction. Will tries to take Caesar home, but the chimp refuses to go. Later on he escapes from the shelter and goes to Will’s house, where he takes some canisters of the new drug. Returning to the shelter, he releases the aerosol to increase the intelligence of the other apes.

BATTLE ON THE BRIDGE

Caesar leads his apes across the Golden Gate Bridge.

At Gen-Sys Will’s assistant, Franklin, is exposed to the drug and becomes ill. He goes to Will’s house to warn him that the drug has an adverse effect on humans, but Will is not there. Franklin accidently exposes a neighbor—an airline pilot—to the drug. Later on, Franklin dies.

Caesar, who is outside his cage, confronts Dodge, who orders him to go back in. Shouting “No!”—his first spoken word—Caesar electrocutes Dodge and flees the shelter with the rest of the apes.

The ensuing scenes must be seen to be believed. The apes free the test subjects at Gen-Sys then the ones in the San Francisco Zoo before heading for the Golden Gate Bridge, where they are met by all manner of law enforcement. It is a remarkable scene. Caesar leads them across, though not without losses, and they make it to Muir Woods. Will arrives and, fearing that people will hunt them down, asks Caesar to come home. Caesar hugs him and says, “Caesar is home.”

As credits roll, the infected airline pilot is shown walking through the San Francisco airport, his nose bleeding. A graphic shows how this new virus will be dispersed around the world, soon to kill much of humanity.

In the next installment I will talk about the equally remarkable sequel to this box office hit, and also preview what is next for the Planet of the Apes series—as soon as this summer!