Throwback Thursday: Exploring The Planet Of The Apes—Part One

This sci-fi franchise has endured for decades. I first presented this post in 2017. 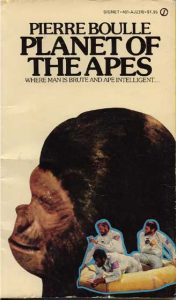 It began in 1963 as a slim novel, La Planète des Singes, written by Pierre Boulle, a Frenchman. Alternately translated as Monkey Planet or Planet of the Apes, it told the futuristic story of a world turned upside down, a place where apes were the dominant species, while humans had become mindless, speechless beasts. The concept just begged for a Hollywood adaptation, and thus began a film series that is still going strong—the eighth installment hitting the big screen in 2017.

Loosely” based on the Boulle novel, this classic sci-fi film could have just as easily been called Moses in Space. Okay, I’m kidding—but it did star Charlton Heston as Taylor, an astronaut who, along with three others, leaves Earth in 1972 on a deep-space mission. As they awaken from hyper-sleep the ship crashes on an unknown planet and sinks in a body of water. An on-board indicator informs them that, while they’ve only aged about eighteen months during the flight, a time distortion has thrust them over two thousand years in the future. One of the astronauts had died while in hyper-sleep, but Taylor and the others survive the crash and make it to shore. Thus begins a long schlep across a desert landscape.

Ultimately they find more agreeable terrain—a forest that provides them with food and water. They also encounter a tribe of primitive humans, but before they can learn more about them a squadron of armed gorillas, some riding horses, herd the humans into nets and either capture or kill them. Taylor is wounded in the throat and is separated from the other astronauts. Later, he will learn that one was killed, stuffed, and displayed in an ape museum, while the other was lobotomized.

Gorillas are the soldiers in this upside-down world.

In the ape city, Taylor is treated by two chimpanzees, one of them the kindly Dr. Zira (Kim Hunter), an “animal” psychologist. Unable to speak as he heals, Taylor observes that the apes maintain a caste system: gorillas serve as soldiers and cops; orangutans are the politicians and priests; chimpanzees are the thinkers and scientists. Inferior humans are used as slaves, experimented upon, or simply killed.

Cornelius (l) and Zira are fascinated with their visitor.

Taylor begins writing notes to Zira and her fiancé, Cornelius (Roddy McDowall), an archaeologist. They are stunned by the revelation but want to learn more. When their superior, an orangutan named Dr. Zaius, finds out about Taylor, he orders him castrated (ouch!). This goes against Ape Law, he says. Taylor briefly escapes but is recaptured as he runs through the town. As one of the gorillas manhandles him, Taylor regains his speech and shouts the film’s most memorable line: “Take your stinking paws off me, you damn dirty ape!” (The line is recycled in some of the sequels and remakes.)

Hard to imagine why Taylor is attracted to Nova.

From the start, Taylor has been attracted to one of the primitives, a mute girl that he names Nova. When the ape tribunal again threatens to have him castrated and lobotomized, Zira and Cornelius break him and Nova out of their cages. They flee to the bleak Forbidden Zone, an area that is off limits, according to Ape Law. But Cornelius has been there before, and he leads them to a coastal cave that he discovered, where artifacts indicate that a human civilization had pre-dated that of the apes. The kicker: a talking child’s doll.

When Zaius and the troops show up, Taylor and the others manage to fend them off by taking the orangutan hostage. They lead him into the cave and show him the artifacts, but he is not surprised. He admits that he has always known a human civilization existed long before the apes became dominant, and he says, “The Forbidden Zone was once a paradise before your breed made a desert of it ages ago!” This motivates Taylor to look further for answers, prompting Zaius to warn him that he may not like what he finds.

Indeed, as Zaius orders the cave sealed up for all time, Taylor and Nova set off along the shoreline on horseback. What follows, as you probably know, is one of the most stunning endings in all of filmdom. Emerging from the sand is the topmost portion of the Statue of Liberty. This is a true “WTF!” moment as Taylor realizes 1) he has returned to Earth two thousand years in the future, and 2) the people from his past have managed to destroy their world, undoubtedly with a nuclear war.

Taylor’s final words: “Oh my God. I’m back. I’m home. All the time, it was… We finally really did it. You maniacs! You blew it up! Ah, damn you! God damn you all to hell!”

Despite this downer of an ending, critics and moviegoers alike loved Planet of the Apes. More important—to the filmmakers anyway—it performed well at the box office. A sequel was inevitable. 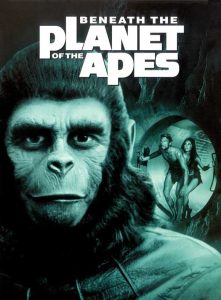 Charlton Heston became part of the supporting cast in this sequel, which picked up right where the first film ended. Taylor and Nova continue riding across the Forbidden Zone when a wall of fire rises up before them, and huge cracks in the earth appear. Telling Nova to stay put, Taylor approaches a rock wall, where he suddenly vanishes.

At about the same time, another space ship has crashed in the Forbidden Zone. The sole survivor is an astronaut named Brent (James Franciscus), who had been sent to look for Taylor and his crew. He encounters Nova who, of course, cannot answer any of his questions, being mute. But Nova is wearing Taylor’s dog tags, which gives Brent hope that he is still alive.

Nova takes Brent to the ape city, where he is shocked to discover the existing civilization. After he is wounded by a soldier, Nova leads him to the home of Zira and Cornelius, who are now married. They get him up to speed regarding Taylor as Zira tends to his wounds. Needless to say, Brent is a bit incredulous over all of this. 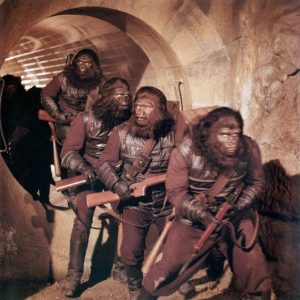 The apes pursue Brent and Nova.

Now that the Forbidden Zone has been breached, the militant gorillas, under General Ursus, have decided to invade the land and strip it of its resources. Any humans living there will be dealt with in the usual harsh manner. Brent decides to return and look for Taylor. But before he and Nova get too far they are captured by the gorillas and designated for target practice. Zira subsequently helps them escape.

Pursued by a small band of gorilla soldiers, Brent and Nova reach the Forbidden Zone and hide in a cave. Well, not exactly a cave, but the ruins of the Queensboro Plaza subway station in New York City. Not a big surprise to us, but it freaks out Brent. They walk all around the underground remains of the Big Apple, finally stopping in front of St. Patrick’s Cathedral, where a high-pitched sound assaults them and causes Brent to try and kill Nova. He finally breaks free and, telling Nova to stay put, he enters the church and finds a group of telepathic humans who pray to—a huge nuclear bomb, I kid you not.

These weird humans, each about two cans short of a six-pack, interrogate Brent and Nova, learning from the former that the ape army is on its way. They cast more illusions in the army’s path, but Dr. Zaius, the orangutan leader who has accompanied the gorillas, sees through them, and they keep on coming. The telepaths will have no choice but to detonate their Divine Bomb, as they call it. At a religious service these people “reveal” themselves to the bomb by peeling off their face masks. They are all mutants—descendants of those who were victimized by radioactive fallout from the nuclear war of centuries past. 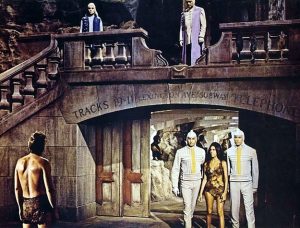 Brent and Nova are interrogated by the mutants.

Separated from Nova, Brent is put in a cell with Taylor. A mutant uses his power to set them at each other’s throats. Nova breaks free from her guard and runs to the cell, where she joyously screams her first and only word: “Taylor!” This breaks the mutant’s concentration, allowing Brent and Taylor to kill him. Brent then describes the bomb to Taylor, who is stunned. The bomb, he says, is a planet-killer.

The apes reach the underground city, first killing Nova (dang!). As they advance, the telepath leader raises the bomb into position before he is killed. Brent kills General Ursus but is in turn gunned down. Taylor, mortally wounded, begs Zaius for help, but Zaius tells him that humans are only capable of destruction. As he dies, Taylor pushed the activation switch. End of Earth. The screen goes white, and a voiceover says, “In one of the countless billions of galaxies in the universe lies a medium-sized star, and one of its satellites, a green and insignificant planet, is now dead.” End of story. 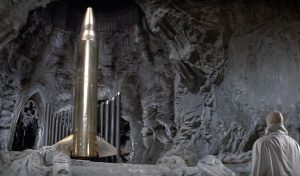 The Divine Bomb. There are alpha and omega symbols on the tail fin.

Well, wasn’t that entertaining? (he said, sarcastically.) Like its predecessor, Beneath the Planet of the Apes scored big at the box office. So again, a sequel seemed inevitable. But how do you stage a sequel on a planet that had just been blown out of existence? We’ll explore that in the next installment.