Throwback Thursday: Can A Butterfly Alter The Course Of Time? 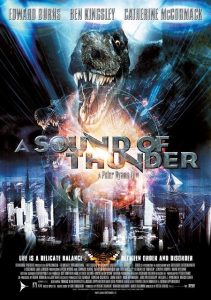 This post, which first ran in 2016, contains a remarkable, chilling observation at the end by Ray Bradbury regarding the U.S. Presidency.

It is hard to imagine a story written by the great Ray Bradbury NOT translating well to the big screen. But such was the case with the 2005 sci-fi thriller, A Sound of Thunder. Bradbury published the story in Collier’s magazine (1952) and he later included it in his short story collection, Golden Apples of the Sun. But to me, all of the bad reviews for this box-office bomb may not have been totally justified.

First of all, in pre-production this film lost its projected star, Pierce Brosnan, and—aside from Ben Kingsley in a smaller role—had to make do with a bunch of “supporting cast” actors. Then, part of the way through filming, the production company financing the film went belly up, and much of the movie—primarily the special effects—had to be shot on a nothing budget. But with all of that going against it, they managed to get it done. And while A Sound of Thunder is far from the best film I ever saw, I found it a watchable 100+ minutes, and it also prompted me to pull out my old copy of Golden Apples of the Sun and re-read the Bradbury story, where I made an amazing—and disturbing—discovery. More on that later.

GOTTA GET BACK IN TIME

In 2055 Chicago, scientist Sonia Rand has developed software that enables people to travel back in time. She had hoped to see it used to help all of humankind, but it was legally stolen by rich asshole Charles Hatton (Kingsley), who uses it to get even richer. Hatton has founded a company called Time Safari, which takes clients back in time to hunt dinosaurs—for a humongous fee. The company’s activities are closely monitored by the government, as well as by team leader Travis Ryer (Edward Burns), in order to prevent changing something in the past that might affect the future. In an early encounter with Sonia Rand, he is curious as to why she is so adamant that the altering of time is inevitable. 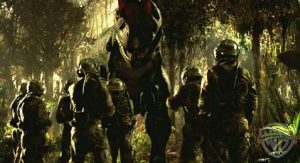 We first see a successful hunt, in which the team and its clients kill an Allosaurus—a creature that they know was only minutes away from its death due to an erupting volcano. Everyone remains on the software-generated path, and no one can shoot until Ryer’s weapon goes off first.

UH-OH, SHE WAS RIGHT

But the next hunt goes seriously wrong. Ryer’s gun misfires, and the Allosaurus keeps on coming. The two clients run and, unknown to Ryer, step off the path, one of them crushing a butterfly under his boot—though Ryer doesn’t learn this till later. He manages to kill the creature at the last second, and back to 2055 they go.

But now there are news reports of rising temperatures and humidity all over the world, as well as increases in plant life, which Ryer notices as he travels the Chicago streets on his way to Time Safari. He leads another expedition, only to find the Allosaurus already dead and the volcano beginning to erupt. The team barely escapes with their lives. At this point the government shuts the company down. 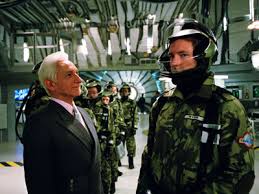 Ryer visits Sonia Rand as more plant life engulfs the city. She explains that time waves, created by some event in the past, are causing all of these problems, and that it will only get worse. As we witness one of the time waves from her high-rise window a huge tree growing through the building, and a million large beetles, cause them to flee.

Back at Time Safari, they analyze the logs of the trip where Ryer’s gun jammed and discover that the expedition returned a couple of grams heavier than when they left. A bio-filter would have immediately caught this, but given the expense of running one, asshole Hatton had it turned off. They realize that they can go back in time and intercept themselves to prevent what happened, but they need to know precisely what it was, as they’ll have only seconds to act.

A review of the team’s equipment reveals nothing, which means that the anomaly was caused by one of the two clients. Ryer and Rand, with other team members, must now travel on foot across the dark, deadly “jungle” of Chicago to find these guys before subsequent time waves alter the present for all time. New life forms—creatures that are a cross between primates and lizards—are just one of the deadly obstacles in their path…

COULD BRADBURY SEE THE FUTURE? 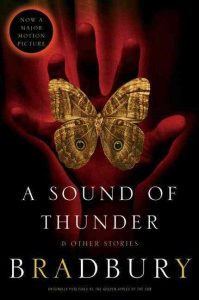 No spoiler alert. I’ll stop here, in case you’re interested in checking this film out. As mentioned before, A Sound of Thunder was loosely based on Ray Bradbury’s story of the same name, first published over six decades ago. Just before the team leader leaves for the time jump he references the presidential election, which had taken place a day earlier. He says, “Thank god Keith won. He’ll make a fine President of the United States.”

Another man replies, “We’re lucky. If Deutscher had gotten in, we’d have the worst kind of dictatorship. There’s an anti-everything man for you, a militarist, anti-Christ, anti-human, anti-intellectual. People called us up, you know, joking but not joking. Said if Deutscher became president they wanted to go live in 1492.”

When the team leader returns from the problematic time trip he notices subtle changes in the Time Safari office. He reluctantly asks who won the election. The other man replies, “Deutscher, of course! Who else? Not that damn weakling Keith. We got an iron man now, a man with guts, by God!”

I got chills reading that…and not in a good way.