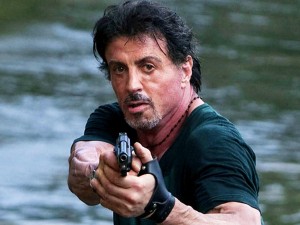 If you’re an aficionado of all things explosive, you probably know that the three Expendables movies, featuring just about every action film hero of yore, constitute a “Blowing-Shit-Up-Fest” of the highest magnitude. The franchise is so popular (and makes so much money) that a female spinoff, The ExpendaBelles, may even be on the radar. More on that later.

LATE TO THE DANCE

The main “gimmick” of this franchise is that all of its actors are nearly as old as me—and dang, that’s old! It was conceived by, among others, Sylvester Stallone, an icon of 1980s-’90s action movies. He had a hand in all of the screenplays, and he even directed the first film. As the star he plays Barney Ross, leader of an elite band of mercenaries that, for a price, will take out any ruthless dictator, drug lord, terrorist organization, or any other bad guys anywhere in the world. Jason Statham plays Lee Christmas, his best friend and knife expert. His core group consists of action film stars Jet Li and Dolph Lundgren, former MMA fighter Randy Couture, and ex-NFL player Terry Crews as Hale Caesar (I’m not making that up).

I came late to The Expendables, but because my male DNA dictates that I like movies where they’re blowing shit up, I got hooked. This was after the first two had been out a while and the third one was in the theaters. Ultimately, over the course of a few years, I saw all of them—multiple times. And here’s what is weird: at this writing I could only recall bits and pieces of the plots. I guess that’s normal. All three films have been praised by critics for two things: their (wink-wink) one-liner humor and their action sequences. 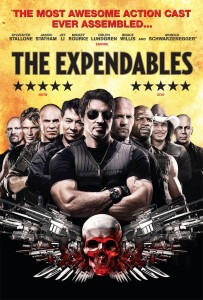 THE ONE THAT STARTED IT ALL

The Expendables (2010) opens with all kinds of shit blowing up as the team rescues hostages held by Somali pirates. Ross and rival mercenary Trench Mauser (Arnold Schwarzenegger) then talk to a government spook known as “Mr. Church” (Bruce Willis), who wants them to take out a Latin American dictator. Mauser passes, but Ross, channeling Jack Burton, says, “What the hell,” and off his team goes.

It turns out that General Garza, the dictator of Vilena, is merely a puppet of a rogue CIA official, James Munroe, who is keeping drug money normally channeled to the CIA for himself. Ross’s contact, a woman named Sandra, is the estranged daughter of Garza. The team’s first foray goes badly and Ross aborts the mission. Amid loads of shit blowing up he escapes the country, but Sandra chooses to stay.

Feeling like he let Sandra down, Ross elects to return to Vilena. He learns that his real target is Munroe. Seems that the CIA cannot be connected with killing one of its own. So now the Expendables have to battle the army of Vilena AND Munroe’s formidable goons. And if you thought that a whole lot of shit blew up during the first half of the film, wait till you see the rest of it. 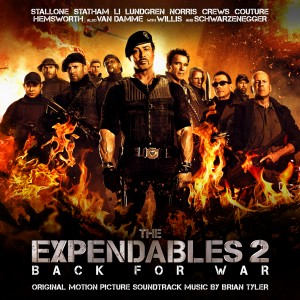 Another long-in-tooth action hero, Jean-Claude Van Damme, had been asked by Stallone to appear in the first film, but he thought it a dumb concept and a sure loser. Hat in hand, he asked to play in the second film, and he does—as über-villain Jean Vilain.

The story opens in the usual shit-blowing-up style, with the team rescuing both a Chinese hostage and rival mercenary Trench Mauser. Another assignment from Mr. Church sends them to eastern Europe to recover a mysterious item from a downed plane. They succeed, but Vilain and his goons, the Sangs, show up, take the item, and kill a young member of the team—Ross’s protégé. Ross swears that he will be avenged.

With tech expert Maggie helping, the Expendables manage to track a signal from the item—a computer, apparently—to Bulgaria, where tons of plutonium were abandoned by the Soviet Union after the Cold War. Vilain has enslaved the locals to labor in the mine, and he intends to sell it to the highest bidder.

Most of Bulgaria subsequently blows up as the Expendables battle the Sangs in an effort to thwart Vilain’s villainous designs. A lone mercenary named Booker (Chuck Norris) joins the fun, as do Church and Mauser, in one hell of a firefight. (What, you thought Willis and Schwarzenegger would just sit on the sidelines?) But the best battle of all is a good old-fashioned mano a mano, Ross and Vilain kicking the living crap out of each other. And the one-liners keep on coming from all. 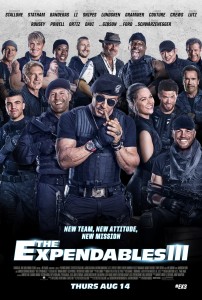 It appears that acting in an Expendables movie is de rigeur in Hollywood. Joining the cast in this installment are: Harrison Ford, Mel Gibson, Antonio Banderas (hilarious as Galgo), Wesley Snipes, Kelsey Grammer, and perhaps the greatest kick-ass woman on the planet, UFC fighter Ronda Rousey. Snipes plays former team member Doctor Death, who the team breaks out of a military prison to help them stop a shipment of ordnance bound for Somalia. Yep, shit blows up like crazy in the early scenes.

The über-villain in this entry is Conrad Stonebanks (Gibson), co-founder of the Expendables, who went rogue. Ross thought he had killed his former partner but was quite mistaken. Now, the guy is a major arms dealer and is wanted by the International Criminal Court for war crimes. Ross, feeling guilty about the near-death of one of his team members, leaves the chagrined old guys behind and takes a bunch of comparative youngsters, including Rousey, to thwart Stonebanks. When the kids are captured, the AARP team shows up to save the day. They rescue the new team, and along with all the aforementioned old farts that joined the cast, they give new meaning to the words Blowing Shit Up with the battle that ensues. And again, there is a solid mano a mano duel between Ross and Stonebanks. 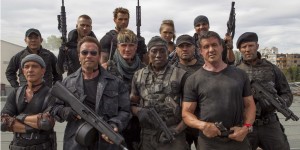 An Expendables 4 has been planned for a long time, and the word is that production on it has just begun, but who knows? Also, following the success of Expendables 2 in 2012, the studio announced plans for an all-female version of the series, titled The ExpendaBelles. Among actresses’ names in the mix were Meryl Streep, Milla Jovovich, and Cameron Diaz. As of now, the film is still “in development.” I think it’s a great idea. Even with women running the show, I have no doubt there will be lots of shit blowing up.