Throwback Thursday: Blimey, Those Wacky Brits—They Sure Love Their Murders!

Midsomer Murders is our absolute favorite show! Or is that “favourite”? This post first ran in 2019. 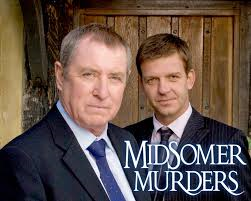 There are not many TV series that survive for two decades. But England’s detective drama, Midsomer Murders, has been aired on ITV for even longer, with the twenty-third series currently on display. Wow, that’s impressive!

FROM AWARD-WINNING NOVEL TO THE SMALL SCREEN

Author Caroline Graham provided the foundation for Midsomer Murders with her seven-book Chief Inspector Barnaby series. Her first story, The Killings at Badger’s Drift, was published in the late 1980s to much acclaim, winning a number of awards from mystery and crime novel associations. It became the pilot episode for Midsomer Murders in 1997, and its popularity had viewers clamoring for more. The first full season launched the following year, with all of Graham’s Barnaby stories adapted for the series.

Nearly all 130+ stories take place in small, quaint country villages located within the fictional British county of Midsomer. This must be one HUGE county, because it contains over eighty villages, including Badger’s Drift, arguably my favorite name—right up there with Pandlefoot Bailey. (I don’t doubt that the show’s creators had no idea that Midsomer Murders would be running for as long as it has.) The main character, Detective Chief Inspector (DCI) Tom Barnaby, was played by veteran actor John Nettles for the first thirteen seasons, and to date by his younger cousin, DCI John Barnaby (Neil Dudgeon). Each is accompanied by a Detective Sergeant (DS), a role played by five different actors through the years. (Our favorite was Ben Jones, who served both Barnabys.) 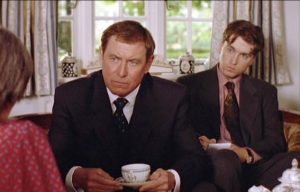 A lot of tea flows through the English countryside.

Why is this series so popular? Chalk it off to the blend of dark humor and sudden violence, seemingly so out of place in these quaint, picturesque little villages. These are not “cozy” mysteries, given the many closeups of the bloody wounds, burns, etc. inflicted on the murder victims. The villages are populated by the quirkiest of characters, and the customs and institutions of these rural villages are not the kind of things with which viewers—especially non-Brits—are too familiar. For example, one episode focuses on a church bell-ringing contest between villages, another features a fox hunt, while the “Perfect English Village” competition gives us several more deaths. 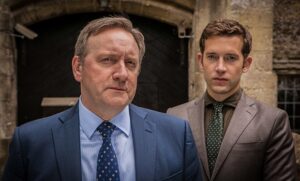 I mentioned that, to date, over 130 episodes have been produced. But I didn’t say that each episode is 90+ minutes in length, about as long as a regular big-screen movie! And the writing is top-notch. My bride and I got hooked on Midsomer Murders four years ago, and I’ve managed to guess the killer(s) in only a handful of them.

If you love mysteries, you’ll have a ball trying to guess whodunit along with DCI Barnaby.