Throwback Thursday: All That Glitters…

I’d like to share a creepy scene from The Burning Ground, one of my four horror novels. This is the final scene in chapter one, which takes place in 1849. (The balance of the story is contemporary.) I first presented this post in 2017.

The setup: gold has been discovered in California. Some miners have established a crude camp, called Rainbow’s End, along the Yuba River, in the foothills of the Sierra Nevada Mountains. They utilize a number of Maidu Indians from a nearby village to perform some of the labor. Things go south when one of the Indians is killed. The Indians retaliate, killing the leader. The miners attack the small village, slaughtering nearly everyone, mostly women and children, as the braves are away on a hunt. As the miners make ready to abandon the camp, they hear creepy sounds coming from the direction of the dead village. There is a break, and we join William Root, one of two miners who were not in the camp and did not participate in the attack on the Maidu village. 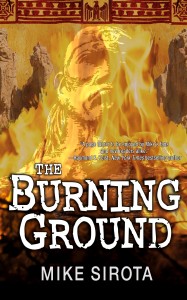 William Root had no skills in following a trail. Only by virtue of having made the trip a couple of times earlier did he manage to find his way back to the Yuba River’s north fork, and to Rainbow’s End.

He had been fortunate in Sacramento; an elderly couple of good Christian conscience had taken in poor Albert Lick, promising to get him to a doctor. After picking up supplies, Root had turned right around and headed back.

From what he’d seen, the Virginian knew that he and the others at Rainbow’s End had made a wise decision months earlier. Sacramento overflowed with new arrivals, San Francisco even more so, he’d heard. And along the way, diggings both wet and dry tumbled into one another as men struggled for the small patches upon which they sought their fortunes. With autumn coming to the foothill country, a few camps had already mushroomed on the Yuba River’s south and middle forks. By next spring, Rainbow’s End would no longer stand isolated.

As he neared to within a mile of the camp, Root had already made his decision. Another week or two in the diggings, then he would find a way back home to his beloved South. How much money could a man need? he reasoned. His personal ambitions included building the biggest and grandest house of worship anyone had yet seen in Virginia. 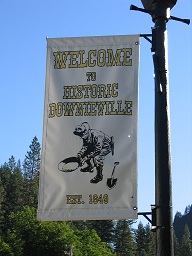 The “semi-ghost” town of Downieville became the model for the fictional town of Lodestar.

The “trail” wound through a dense forest and would emerge just west of the camp. Preoccupied with his thoughts, Root did not notice the sounds of the forest falling behind him. Only after the two horses of his team, ignoring both rein and whip, began to snort and rear did he sense something was wrong.

Leaving the animals tethered, Root continued on foot. He held an old Bible in one hand, a pistol in the other; divine intervention, he knew, had its limitations. His strides, though steady, were cautious. Five minutes passed before he stepped out from the trees.

While every tent in Rainbow’s End still stood, Root knew that the camp was dead. The first sign of death stared blindly at him from a tree at the edge of the camp. Edwin Brookmire had been pinned to the broad trunk of a sycamore by three arrows, one through each wrist—Christ-like, Root thought crazily—and a third through his neck.

Nearby lay the nude body of a young miner named Daniel Sullivan. It had been cut into pieces—seven, Root knew after taking inventory—then carefully reassembled, with a gap of an inch between each of the parts.

Now the sight and smell of death came from everywhere, and Root wondered how all except the feel of it had eluded him until now. Two miners were entwined grotesquely, their bodies caked with blood and flecked with gold dust, which had been sprinkled over them. Another—the baby-faced Jonathan Canfield—had been staked upside-down on a tent pole. His severed genitals lay on the ground by his head, a six-pound nugget balanced in his crotch to take their place. And sitting upright just beyond him, their arms linked in some perverse camaraderie, were three headless corpses—one of them Louis Hobart, Root thought for sure. Each had a tin cup, from which they’d guzzled their share of Forty Rod whiskey, but which now brimmed over with gold. 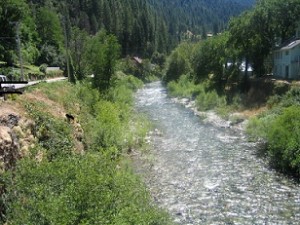 The Yuba River passes through Downieville.

The gold: Root now realized that it was everywhere—dust, flakes, nuggets, from thin layers to small cairns. He’d left footprints in the gold, which reached all the way to the edge of the river. Incredible wealth, the work of over twenty men for an entire summer, tossed upon the ground, the wind, the water.

Death filled the tents, too. Root knew this for certain and chose not to look inside them. It suddenly occurred to his overwrought brain that he needed to get away from this place, let others know what happened, warn them…

Not back the way he’d come; Root couldn’t look at that again. He penetrated the forest behind the supply tent, intending to angle back to his wagon. His reeling strides were those of the drunkards he so despised.

When he nearly stumbled over the carcass of a mule, it occurred to him that he’d seen no animals either in or around the camp.

The mule had been gutted, its intestines and other organs thrown into some nearby manzanita bushes. Most of the remaining cavity had been filled up with Sam Beale, more pieces of him than there had been of Daniel Sullivan.

The rest of the cavity had been stuffed with gold.

Okay, hopefully that didn’t ruin your lunch. The Burning Ground was a joy to write, but it also allowed me to make a statement about what I call California Genocide, the decimation of my state’s indigenous population. If you read it, let me know what you think.