Throwback Thursday: A Taut Thriller From Down Under

Starting off the New Year with one of my favorite genres: monster movies. This post first appeared in 2016. 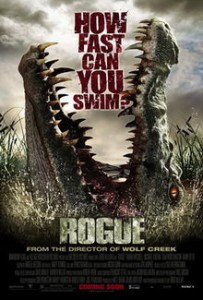 I’m a sucker for “creature features” and I always keep an eye out (ouch!) for ones that I might’ve missed. When Netflix recommended Rogue, a 2007 indy thriller from Australia with some familiar names in the cast and—amazingly, for this genre—a 100% rating on Rotten Tomatoes, I just had to see it. Glad I did.

HOW FAST CAN YOU SWIM?

With that tagline we meet jaded travel writer Pete McKell (Michael Vartan; Alias) as he joins a bunch of tourists for a river cruise in Australia’s Kakadu National Park. (I couldn’t help humming the Gilligan’s Island theme song at the start.) The tour guide is wildlife researcher Kate Ryan (Radha Mitchell; Pitch Black, Finding Neverland), and the highlight of the cruise through this beautiful park is seeing the many crocodiles in the river. They even watch as another boat feeds a leaping croc by dangling meat at the end of a long stick. 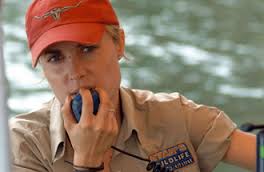 Kate (Radha Mitchell) planned for a nice day on the river…

Other than one tourist who came on the cruise to sprinkle his dead wife’s ashes on the river, the diverse group seems happy with the tour as it winds down. The only negative was running into two beer-swilling guys named Collin and Neil (Sam Worthington; Avatar), the latter apparently an ex-boyfriend of Kate’s. But nothing happens, and on they go with the tour.

GET OFF MY TURF, MATE!

Just as Kate is about to turn the boat around, a flare is spotted up ahead. An unwritten code of the river demands that it be investigated, so despite some kvetching from a couple of passengers Kate keeps on going. A few miles upriver they find the wreck of a boat, and as they circle it, something rams them from below. Kate manages to run the boat onto the shore of a small island in the middle of the river before it sinks. Everyone climbs off, and as they wonder what to do, one of the tourists (Robert Taylor; yeah, Longmire!) is pulled into the river by an enormous crocodile.

Kate concludes that the croc is territorial and will be more aggressive because they’ve shown up in its neighborhood. Oh, ya think? And more bad news: this is a tidal river, and in a few hours the island will be underwater.

Things seem hopeful when Neil and Collin show up in their small boat. They can at least ferry people off the island. But their boat is also attacked, and Collin is killed. Neil makes it safely to the island.

ANYONE HAVE A BRIGHT IDEA? 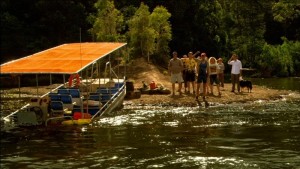 The small island is about to get even smaller.

As darkness falls, Neil shows some serious cajones by offering to swim to the riverbank and set up a zip line. He makes it, and a woman named Mary Ellen, who had been seriously freaking out, goes first. Part of the way there she freaks out even more and freezes. Another tourist, an asshole named Allen, starts across on the line with his daughter Sherry (Mia Wasikowska; Alice in Wonderland), despite a warning from Neil that the line can’t hold them all. When Neil tries to secure the line, the croc kills him. The others fall into the river and manage to make it back to the island. But karma kicks in, and Allen is snatched off the island by the croc.

Time is running out as the water rises, and the next bright idea comes from Pete, the travel writer. They’ll bait the boat’s anchor with a couple of dead birds, secure the other end of the rope to something on the island, and when the croc takes the bait, they’ll all swim to shore on the opposite side. Sounds crazy…but what choice do they have? Only problem: Sherry’s mother can’t swim. 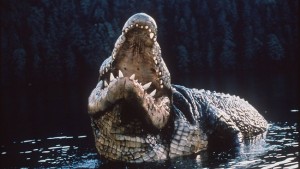 Ultimately the croc takes the bait, and one of the other tourists helps the woman across. Kate, among the last to come, is grabbed by the croc and dragged under as a horrified Pete watches. Once ashore, he lags behind instead of following the others, hoping that he might be able to help Kate…

No spoiler alert here. There is still plenty to come, including Pete’s descent into the monster’s cave lair; some great scenes here. Rogue is a taut thriller that doesn’t depend on cheap scares or wink-wink humor, like so many in that genre. And as a bonus, the backdrop of Kakadu National Park, in Australia’s Northern Territory, is awesome.