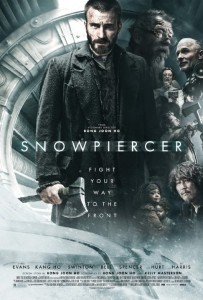 Let us all hope Climate Change doesn’t bring our planet to this nightmare! I first posted this article in 2015.

Did you ever have a bad dream where you’re aboard a train that just rolls on and on, and you can’t get off of it? That’s what passengers on a train called Snowpiercer must endure—the difference being that they would not want to get off if their lives depended on it—which, in fact, it does.

Until recently I had not heard of Snowpiercer, a Korean-produced and directed film that premiered in the U.S. in 2014. It showed up on Netflix as one of those, “If you liked that movie, you’ll like this movie” sort of things. But it had a great international cast, including its star, Chris Evans (yeah, Captain America), and a fascinating premise, so I decided to give it a try. Glad I did. 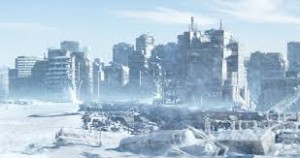 The view from the Snowpiercer is bleak.

In 2014, with global warming putting the planet at risk, the lead nations decide that climate engineering is the solution. Bad call; Earth is plunged into an ice age that destroys nearly all life as we know it. An eccentric, train-obsessed billionaire named Wilford (Ed Harris), having foreseen this eventuality, has built a huge super-train, powered by a perpetual motion engine, that can span the globe endlessly. It is a self-sustaining environment, as long as the balance of people on board is maintained.

By 2031, the year in which the story takes place, a class system has long evolved on the Snowpiercer. The elite occupy the front cars, while the have-nots exist in squalor at the rear. We learn that these poor folks at first had to resort to cannibalism to survive, hence many of them are missing arms or legs (ee-yew!). Now, thanks to the “kindness” of Wilford, they are given these gross-looking protein blocks to eat—you don’t want to know what they’re made of, as the people will later learn.

THE PEASANTS ARE REVOLTING

Guided by his old mentor, Gilliam (John Hurt), Curtis Everett (Evans) plans to lead a revolt during a delivery of the protein blocks by Wilford’s guards. Somewhat reluctant at first to battle his way toward the front cars, Curtis is spurred on by a couple of events. First, the young son of his friend Tanya (Octavia Spencer) is taken away to an unknown fate. Second, a woman called Minister Mason (Tilda Swinton) shows up to mete out punishment to another of Curtis’s friends. The poor guy’s arm is shoved out into the cold for seven minutes, during which Mason makes a bizarre speech. When the frozen arm is brought back in, she hits it with a sledgehammer. Naturally it breaks off. 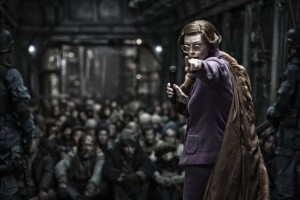 The Oscar-winning Swinton has played some weird roles in her day (remember the White Witch in The Chronicles of Narnia or Gabriel in Constantine?), but this one beats all. You don’t know whether to cringe or laugh your ass off. She was nominated for and won many honors for her role as Minister Mason at various film festivals. Her performance was amazing.

After Mason leaves, Curtis and the others overpower the guards and take control of the last few cars. One is a prison car—looks more like a morgue—from which they release a pair of druggies—a guy named Nangoong, who designed the train’s security system, and his daughter Yona, a clairvoyant. Nangoong, Curtis figures, can open the doors into the forward cars, while Yona can tell them what is on the other side before he does. 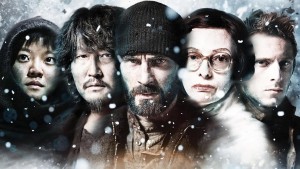 The journey of the have-nots through the train comprises the bulk of the story, and it is so compelling that, rather than give anything away, I will stop here. Suffice to say, I found it mesmerizing, and for a change I agreed with the critics, many of whom put Snowpiercer in a variety of Top Ten lists and praised it effusively. It is definitely worth the two hours of viewing time.