In the interest of transparency, here is a post about the Invisible Man.  😊  It first ran in 2015. 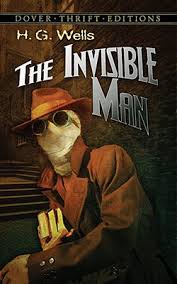 Old joke: Igor says to Count Dracula, “Master, the Invisible Man is here!” and the Count replies, “Tell him I can’t see him.” (Like I said, old, and also bad.)

Of late I’ve had the great pleasure of revisiting classic books and movies in my favorite genres. In some cases I’ve enjoyed the same story in both formats. This is true of The Invisible Man, the famous novel by H.G. Wells. He published the book in 1897 and was still around to see its film release by Universal Pictures in 1933. (Wells died in 1946—holy crap, he and I were alive and on the same plane of existence for five months!)

We all know that many authors hate what Hollywood does to their stories. (Just ask Clive Cussler.) So what did Wells think of the film adaptation? He liked it, but he seemed disappointed that the character named Griffin—the Invisible Man—was a raving nutcase. That’s odd, because in the film Griffin (played by the ubiquitous—for the 1930s and ’40s—Claude Rains) was a normal guy who went bonkers from the chemicals he used for the invisibility formula, whereas the backstory in the novel has him a madman from before he started his experiments. In any case, there are a few other differences that I’ll point out as we go along. 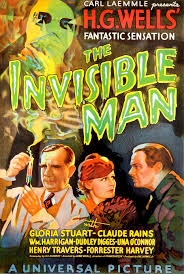 In both media, the story begins with a heavily dressed guy, his head swathed in bandages and his eyes covered by shades, trudging through snow in rural England. Griffin takes a room at a tavern in Iping, saying that he was disfigured in an accident and demanding to be left alone. The owners and their doofus barflies find him odd, but they comply—for a while, anyway.

Griffin is there to perform more experiments in order to find a way back from invisibility. In the book he is able to keep the rabble away for a couple of months; in the film his privacy lasts no more than a day or so before the meddling fools cause him to lose it. He reveals his invisibility, terrorizes the town with pranks (he kills a constable in the film), then flees into the countryside.

YOU GOTTA HAVE A LOVE INTEREST

In the novel Griffin has always been a loner, and he remains so till the end. That wouldn’t work for Hollywood, don’cha know. Griffin needed a love interest, so Flora (Gloria Stuart) was added to the plot. (Remember, Griffin was normal before he started messing with invisibility.) He worked as a lab assistant for Flora’s father, along with another assistant, a man named Kemp. 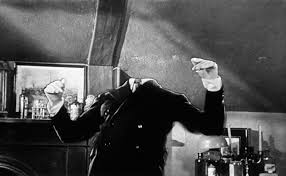 Getting crazier by the hour, Griffin freaks out the countryside, putting much of England on alert. But being invisible also means running around naked, and besides dealing with the weather, Griffin must also be aware that any food he eats will give him away. (Imagine seeing disembodied fish ’n chips wending their way toward the stomach.) He also needs to carry around his books, which contain all of his notes, and some money, so (in the novel) he conscripts a homeless guy to carry them around. The guy later betrays him and seeks asylum in a jail.

Griffin eventually winds up at Kemp’s house (wounded, in the book). They were acquaintances at medical school (good friends, in the movie), and Griffin feels that he can trust him. But as the Invisible Man tells his backstory and also his future plans, Kemp realizes that he’s at least nine cans short of a six-pack. Griffin talks about initiating a reign of terror, using his invisibility for all manner of nefarious doings, and he wants Kemp to be his visible partner and confidante.

In the movie, Flora and her father show up to try and talk some sense into Griffin, but to no avail. Kemp manages to send a message to the cops, who surround the house. Vowing revenge against Kemp, Griffin escapes. The next night he makes good on his promise, causing Kemp’s car to go over a cliff. (Not so in the book; Kemp survives.) Soon, in the countryside, the cops take Griffin down. When he dies, various parts of him become visible. Eventually, all of him is revealed. 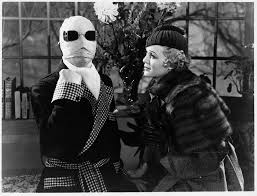 For a writer growing up in Victorian England, H.G. Wells had one hell of a vivid imagination. He did not write any sequels to The Invisible Man, although he did leave the door ajar. In an epilogue, we learn that the homeless guy still has Griffin’s notes, which contain the invisibility formula.

Hollywood, on the other hand, churned out countless sequels and knockoffs, including (gawd!) Abbott and Costello Meet the Invisible Man. But none could top the 1933 gem, which was eventually selected for preservation in the U.S. National Film Registry by the Library of Congress, which deemed The Invisible Man “…culturally, historically, or aesthetically significant.” As the Brits would say, “Jolly good.”