This post, about a bizarre incident that occurred nearly a century ago in the Grand Canyon, has been viewed countless times since it first ran in 2017.

Did the newlywed couple drown in the river and get washed out to sea? Were they murdered? Or did aliens abduct them right out of their boat? Over ninety years after Bessie and Glen Hyde set off down the Colorado River through the Grand Canyon, their disappearance remains shrouded in mystery.

A FREE SPIRIT AND A BEAN FARMER 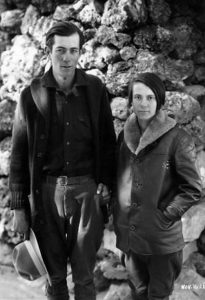 Bessie Haley, born in West Virginia in 1905, was an adventurous young woman who loved to travel. An artist and poet as well as aspiring actress, she was what folks called “bohemian” back in the day. After graduating high school she journeyed west to San Francisco and enrolled in a fine arts school. A short-lived marriage ended in divorce.

Idaho farmer Glen Hyde, born in 1898, was an avid boatman. In 1926 he completed a trip along the Salmon River all the way to the Pacific Ocean. A journey down the entire length of the Colorado River seemed inevitable.

Bessie and Glen met in 1927 on a passenger ship headed down to Los Angeles. They fell in love and were married in April of 1928, the day after Bessie’s divorce became final.

Bessie had always thrived on being the center of attention, so she was more than amenable to Glen’s plan of traveling down the Colorado River. At the time only a few dozen people, all men, had completed the trip. Glen’s goal was to do it faster than any of them, while the goal for Bessie was obvious: she would be the first woman to complete the voyage. They would surely go on the lecture circuit after that; perhaps a book deal loomed in their future. Bessie even imagined acting in a theater piece based on their exploits.

Having made his journey along the Salmon River in a vessel called a sweep scow, Glen decided to construct another one—perhaps a bit larger—for this new challenge. He finished the twenty-foot wooden scow in two days, and they loaded it with supplies. (For some reason, they forgot to bring along life jackets.) Deeming it their honeymoon cruise, Bessie and Glen set off from Utah in late October of 1928, their goal to reach Needles, California early in the second week of December. 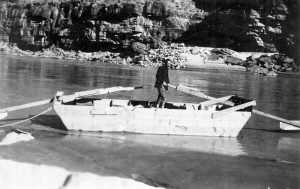 Glen Hyde in his sweep scow.

The first part of the journey took Bessie and Glen through a number of other canyons along the Green and Colorado Rivers before entering the Grand Canyon. Around mid-November they stopped at Bright Angel Creek and hiked up to Grand Canyon Village on the South Rim, where they purchased more supplies. They also met well-known photographer and boatman Emery Kolb, who would later state that Bessie looked ready to end the trip right then and there. But after resting for a day or two they hiked back down to the scow.

Before setting out again, the couple met a man named Adolf Sutro. He appeared to be fascinated with the boat and asked if he could ride with them. They dropped him off at Hermit Creek, eight miles farther downriver. The date was November 18, 1928. Sutro was the last person to see Bessie and Glen Hyde, alive or otherwise. 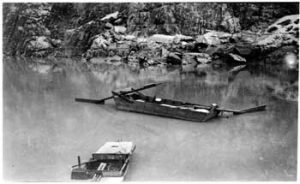 The scow, as discovered by Rollin Hyde and the Kolbs.
Photo: Emery Kolb

Even a few days prior to their scheduled arrival at Needles Glen’s father, Rollin Hyde, became worried that something had gone terribly wrong. He organized a number of search parties and even hired Native American trackers to look for his son and daughter-in-law, all to no avail. He went as far as petitioning the Secretary of War to free up planes for an aerial search of the Grand Canyon. This effort finally paid off on December 19 when the empty sweep scow was spotted at mile 237. It appeared to be intact, though no one occupied it.

Rollin Hyde enlisted the help of Emery Kolb and his brother Ellsworth, but circumstances did not allow them to reach the scow until Christmas Day. They found it floating in a calm pool with everything on board still in its place, even a gun that Glen had brought along. But no trace of Bessie or Glen was found that day, nor all the days, months, and years thereafter.

Some speculated that the Hydes had been murdered. Others believed that one had murdered the other and then disappeared. Those familiar with the river were certain they had drowned. But where were the bodies? They never turned up. 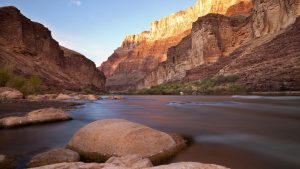 The Colorado River may be reluctant to give up its dead.

In 1971 an old woman on a Grand Canyon rafting trip announced that she was Bessie Hyde, that she had murdered her husband because he abused her. Later on, she admitted that she had lied. Others have made similar claims.

The skeletal remains of a man with a bullet in his head turned up on the canyon rim in 1976. At first thought to be Glen Hyde, forensics showed that the victim had been shot only a couple of years prior to the discovery.

So will we ever know what happened to honeymooners Bessie and Glen Hyde? Maybe; maybe not. I was only half-kidding about alien abduction since, as you know, I have a pretty open mind about things like that. But if you want to hear something REALLY weird, I end this post with a poem found in a collection that Bessie Hyde had written:

“Oh! Mamma dear, please come!/My dolly must be drowned/When I put her on the creek,/She sunk without a sound.

“Wee Betty’s eyes filled with tears,/Where could poor dolly be?/Perhaps she’d turned into a mermaid,/And drifted out to sea.”