This is one of the oddest stories I’ve come across in all the years that I’ve been doing this blog. The post first ran in 2018.

“There’s a sucker born every minute,” someone once declared. No, it wasn’t P.T. Barnum, the great showman, as many believe. But Barnum did have a role to play in the story of the Cardiff Giant—the greatest hoax of the nineteenth century.

In 1868 a Binghamton, New York businessman named George Hull traveled west to visit a sister in Fort Dodge, Iowa. After being schlepped to a revival meeting the self-proclaimed atheist got into an argument with a preacher on the latter’s literal translation of the Bible, specifically a passage in Genesis that stated, “There were giants in the earth in those days.” The light bulb went off, and Hull hatched a scheme that would both piss off—or fake out—the faithful…and earn him some money. He would create—and “discover”—a petrified giant.

Hull proceeded to buy a five-ton block of gypsum, claiming that it was to be sculpted into a statue of Abe Lincoln. He had it shipped to Chicago, where he hired a stonecutter to carve it into the likeness of a ten-foot man. He paid the man and also swore him to secrecy by promising him a share of future profits.

Once the 3,000-pound giant was completed Hull shipped it to Cardiff, New York, an area where many ancient fossils had been found. He buried it on the farm of a distant relative named William Newell, whom he also cut in on the deal. And there it remained, for nearly a year, hopefully long enough for anyone to forget any odd activities of Hull that they might have witnessed. 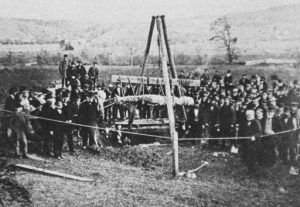 In October of 1869 Newell hired two men to supposedly dig a well. Neither was curious when the farmer showed them exactly where to dig, but they were surprised when they almost immediately struck something hard. As the figure took shape, one of the men exclaimed that an old Indian had been buried there.

Word spread quickly, and people flocked to Newell’s farm to see the Cardiff Giant. Newell raised a tent around the statue and charged a quarter to enter, raising it to fifty cents after Hull arrived in town. Hull had spent nearly $3,000 in perpetuating the hoax, a sum that was quickly recovered, and then some, as word of the incredible find spread beyond the boundaries of upstate New York.

Newell had already been refusing offers to buy the Cardiff Giant, but once Hull showed up they decided it was time to cash in. they sold the statue for as much as $30,000 to a Syracuse-based syndicate, led by a man named David Hannum, who displayed it in his city. And still the people came in droves. 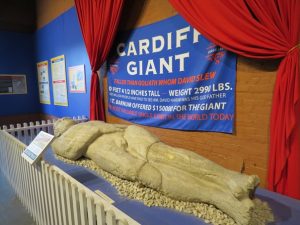 By this time some experts began to see the Cardiff Giant for what it was: a giant hoax. Archaeologists, geologists, and scholars were not to be fooled. But did this deter the masses? Not a chance, which led Hannum to state, “There’s a sucker born every minute.”

By this time P.T. Barnum decided that, fake or not, he had to have the giant. He offered to buy it from the syndicate for $50,000, but Hannum turned him down. Not to be deterred, Barnum had a duplicate made out of wax and plaster and displayed it in his New York City museum, claiming it was the real Cardiff Giant, that the other was a fake. People also came by the busload.

Hannum, of course, sued Barnum for calling his giant a fake. As this dragged on, other replicas of the Cardiff Giant began popping up all over the country. Each one, of course, was the “real deal.” By now George Hull, who had profited nicely from all of this, began bragging about the great hoax that he had perpetrated. Late in 1869 he confessed everything, and by the following year the Cardiff Giant had turned from a source of wonder to one of ridicule. Both Hannum’s and Barnum’s giants were declared fakes by the court and the case was thrown out, the judge stating that the showman could not be sued for calling his fake giant a fake.

Hull’s giant, curiously, wound up back to Iowa, where it served as a coffee table in a man’s basement game room. In the 1940s he sold the Cardiff Giant to the Farmer’s Museum in Cooperstown, NY, where it resides to this day.

And what about George Hull? Believe it or not, in 1877 he attempted the same scam, this time with a seven-foot giant that he buried in Colorado. No one bought it, and he lost his shirt on the deal. He died, practically broke, in 1902, though possibly with a smile on his face thinking about how, with the Cardiff Giant, he had perpetrated the greatest hoax of the nineteenth century.