There Is No Try: Lines From The Star Wars Universe—Part Two

So at the end of Episode III: Revenge of the Sith (2005), Darth Vader is put back together from Anakin Skywalker’s spare parts, newborns Luke and Leia are sent to Tatooine and Alderaan respectively, and Obi Wan Kenobi and Yoda go into exile. We have a seamless transition into Episode IV—which had already hit the big screen twenty-eight years earlier!

As far as anyone was concerned, the title of this groundbreaking film was—Star Wars. It remained that way for years, even after the sequels came out. The designation of “Episode IV” had many folks scratching their heads and wondering, what happened to I, II, and III? We would, of course, eventually find out.

But no matter; this film was a worldwide phenomenon, and for a while after its release it was the highest-grossing movie of all time. This “space opera” gave us everything we could love in a story, primarily an ensemble of characters that we could root for, as well as a few that we loved to hate. And we’re still rooting for some of them to this day, over four decades later.

Beginning with Episode IV, the trilogy gave us a gold mine full of fun and quotable lines. Some of them, such as, “May the Force be with you,” have become part of the vernacular.

Luke Skywalker, talking about his home planet: “If there is a bright center to the universe, you’re on the planet that it’s farthest from.”

Han Solo, talking about Princess Leia: “Wonderful girl. Either I’m going to kill her or I’m beginning to like her.”

C-3PO, always on hand to kvetch and complain: “We seem to be made to suffer. It’s our lot in life.”

Princess Leia, glaring at Chewbacca: “Will someone get this big walking carpet out of my way?” 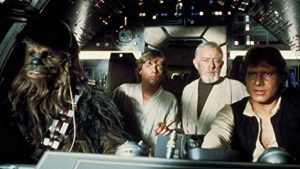 Aboard the Millennium Falcon.

Obi Wan to Luke: “Mos Eisley spaceport. You will never find a more wretched hive of scum and villainy. We must be cautious.”

Deeply affected by the destruction of Alderaan, Obi Wan says, “I felt a great disturbance in the Force, as if millions of voices suddenly cried out in terror and were suddenly silenced. I fear something terrible has happened.”

When Han calls Obi Wan a “damn fool,” the Jedi replies, “Who’s the more foolish? The fool, or the fool who follows him?”

Darth Vader enters Leia’s cell with a nasty-looking interrogation droid and says, “And now, your highness, we will discuss the location of your hidden rebel base…”

When Han says, “Not a bad bit of rescuing, huh? You know, sometimes I amaze even myself,” Leia replies, “That doesn’t sound too hard.” 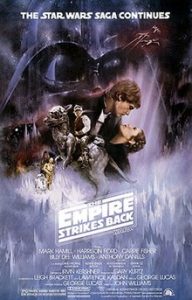 Whatever groundwork Episode IV laid, its sequel topped in spades. The attack of the Imperial Walkers on the ice planet was breathtaking, and for the first time we got to hear the “Darth Vader music,” the (in)famous Imperial March played at countless sporting events all across the country. (I use it as my cellphone ringer.) We met Jedi master Yoda and enjoyed his dollops of wisdom, presented in his twisted syntax. And we were shocked to learn of the relationship between Vader and Luke during their duel, when Luke accused Vader of killing his father, and Vader told him, “No. I am your father!” Holy crap! 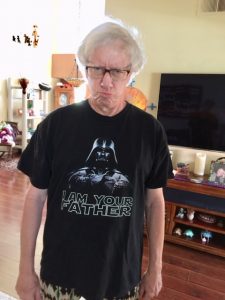 Leia, annoyed with Han (as usual), exclaims, “Why you stuck up, half-witted, scruffy-looking Nerf herder!” His reply: “Who’s scruffy looking?”

Under attack, the Millennium Falcon won’t start. Leia asks Han (snarkily), “Would it help if I got out and pushed?”

As Yoda trains Luke, he tells him, “Yes, a Jedi’s strength flows from the Force. But beware of the dark side. Anger, fear, aggression; the dark side of the Force are they. Easily they flow, quick to join you in a fight. If once you start down the dark path, forever will it dominate your destiny, consume you it will, as it did Obi-Wan’s apprentice.”

Yoda tells Luke to do something seemingly impossible. Luke says, “All right, I’ll give it a try.” Yoda’s response is by far my most favorite Star Wars quote: “No, try not. Do, or do not. There is no try.”

Vader and Luke do battle.

Emperor Palpatine to Vader: “We have a new enemy. The young rebel who destroyed the Death Star. I have no doubt this boy is the offspring of Anakin Skywalker.” 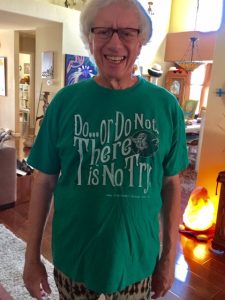 Vader tells his son, “Luke, you can destroy the Emperor. He has foreseen this. It is your destiny. Join me, and together we can rule the galaxy as father and son.”

But Luke continues to fight, and Vader backs him into a corner: “You are beaten. It is useless to resist. Don’t let yourself be destroyed like Obi Wan did.”

Han is about to be put in carbon-freeze. Leia says, “I love you.” He replies, “I know.”

Even though this third entry in the original Star Wars trilogy could not top its predecessor, Episode VI was still a wonderfully entertaining film that succeeded in tying up all of the loose ends. Han, Luke, and friends escaped the evil clutches of Jabba the Hutt, Luke—now a powerful Jedi—managed to make peace with his father, the Empire was defeated once and for all, and it appeared that Han and Leia were going to ride off together into the sunset. And the cute-as-heck Ewoks spawned a new merchandising frenzy. Many wondered if an Episode VII was in our future, and of course it was—thirty-two years later. The prequel trilogy filled the in-between void.

Luke returns to Dagobah and finds Yoda near death: “That face you make…look I so old to young eyes?” When Luke says “No, of course not,” Yoda replies, “I do. Yes, I do. Sick have I become, old and weak. When nine hundred years old YOU reach, look as good YOU will not, hmm?”

C-3PO to R2D2: “If I told you half the things I’ve heard about this Jabba the Hutt, You’d probably short circuit.” 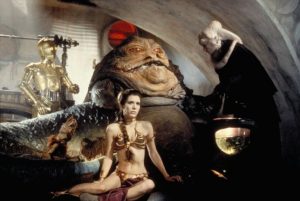 Jabba: “This bounty hunter is my kind of scum, fearless and inventive.” (Little does he know it’s Leia in disguise.)

Han has been unfrozen but is still a prisoner. C-3PO is serving as translator in a conversation that goes like this: “His high exaltedness, the great Jabba the Hutt, has decreed that you are to be terminated immediately.” Han: “Good, I hate long waits.” C-3PO: “You will therefore be taken to the Dune Sea and cast into the pit of Carkoon, the nesting place of the all-powerful Sarlaac.” Han: “Doesn’t sound so bad.” C-3PO: “In his belly you will find a new definition of pain and suffering as you are slowly digested over a thousand years.” Han: “On second thought, let’s pass on that, huh?”

The Emperor gives Luke the bad news: “Everything that has transpired has done so according to my design. Your friends, up there on the sanctuary moon are walking into a trap, as is your Rebel fleet. It was I who allowed the Alliance to know the location of the shield generator. It is quite safe from your pitiful little band. An entire legion of my best troops awaits them. Oh, I’m afraid the deflector shield will be quite operational when your friends arrive.” 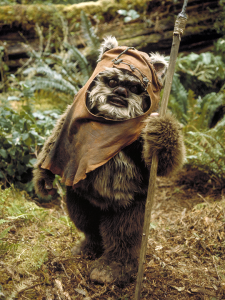 Vader has destroyed the Emperor and saved Luke, but now he is dying. “Luke, help me take this mask off.” Luke: “But you’ll die.” Vader: “Nothing…can stop that now. Just for once…let me…look on you with my own eyes.”

Old Anakin Skywalker looks at Luke and smiles. “Now go, my son. Leave me.” Luke: “No, you’re coming with me. I’ll not leave you here. I’ve got to save you.” Anakin: “You…already have, Luke.”

Wow, intense. The ceremony at the end of Episode VI, celebrating the defeat of the Empire, is bittersweet for Luke, especially when the spirits of Obi Wan, Yoda, and young Anakin appear. A grand conclusion to the first trilogy.

But where there once was an Empire, there soon will be a First Order ready to enslave the galaxy. It’s an unwritten rule that Assholes Abound. We’ll take a look at Episodes VII and VIII next week.