“The Supreme Excitement Of Our Time!”

The above gaudy title was the tagline for This Island Earth (1955), a science fiction thriller from the “golden decade” of that genre. For generations raised on CGI, motion capture, and other high-tech wizardry, this film’s special effects might come off as laughable. Indeed, it has been lampooned by Mystery Science Theater 3000, and even by “Weird” Al Yankovic. But hey, this was sixty-five years ago, and I think a portion of the review in Variety said it best: “Special effects of the most realistic type rival the story and characterizations in capturing the interest in this exciting science-fiction chiller, one of the most imaginative, fantastic and cleverly-conceived entries to date in the outer-space film field.”

This Island Earth was one of my favorite films back then, but I must admit I hadn’t seen it in decades until recently. I viewed it in a Blu-Ray edition released by the Shout! Factory, and I have to say, it never looked better. Perhaps I’d forgotten the main storyline, but I for sure remembered the “scary” Mutants near the end, and the scene where the two main characters, flying in a Stinson 108 light airplane, are sucked up into a gigantic flying saucer. (The latter scene appears in E.T.: The Extraterrestrial, when everyone’s favorite alien turns on the television in Eliott’s house.) 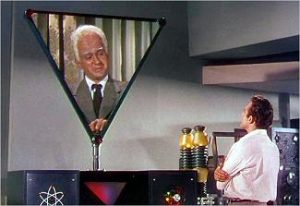 Cal Meacham is recruited by Exeter.

A quick overview: Dr. Cal Meacham (Rex Reason), an electronics wizard, is “recruited” by a mysterious man named Exeter (Jeff Morrow) after successfully assembling a complex, high-tech communications device. Cal is flown by a pilotless plane to a remote area in Georgia, where other top scientists are working in Exeter’s lab. The group includes Dr. Ruth Adams (Faith Domergue), one of Cal’s old flames. Oddly, she professes not to remember him. Other scientists at the facility are also acting kind of strange.

Long story short: Exeter is from the planet Metaluna, which is constantly at war with a race called the Zagons. With their planetary ionization layer failing, they need huge amounts of uranium to boost this defensive shield. The scientists were supposed to develop a method where uranium could be extracted from lead. But time has run out, so Plan B involves the good people of Metaluna migrating to Earth and subjugating all of its inhabitants. (Alien invasion; a common theme of 1950s sci-fi movies.)

Exeter prepares Ruth and Cal for the journey to Metaluna.

Cal and Ruth, along with a third scientist, Steve Carlson (Russell Johnson; yeah, the Professor on Gilligan’s Island), flee the facility and head for a nearby airport. The aliens destroy the facility, killing all of the other scientists. Steve is zapped on the way to the airport, but Ruth and Cal manage to make it there, and they take off in the aforementioned small plane. Exeter, now aboard a huge spaceship, utilizes a tractor beam to pull them up. For whatever reason Exeter is going to take the pair to Metaluna…

And thus begins the balance of the film, with special effects ahead of their time, with nasty Mutant creatures, and with a compelling plot twist. This Island Earth was based on a 1952 novel by author Raymond F. Jones. As a fun aside, the film was released as part of a double feature with Abbot and Costello Meet the Mummy. If you’re into classic science fiction movies, you should definitely give This Island Earth a try. 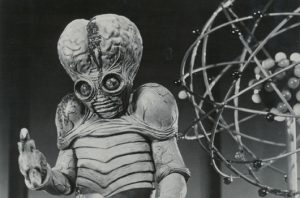 Mutants can be rather unpleasant…