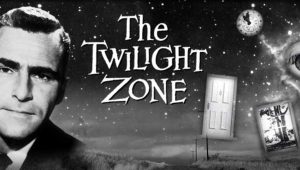 I recently got the chills—not in a good way, either—watching a nearly six-decades-old episode of the original “Twilight Zone” titled, “The Obsolete Man.” Given the current disturbing state of politics in this country, if not the world, I think you’ll understand why.

CHOOSE THE METHOD OF YOUR EXECUTION

In a future totalitarian State, we see an austere room with a “peer jury” of lookalike men and women, presided over by the uniformed Chancellor on an elevated podium. As a middle-aged man named Romney Wordsworth (Burgess Meredith) is marched in, Rod Serling, who wrote this episode, tells us (my bold): 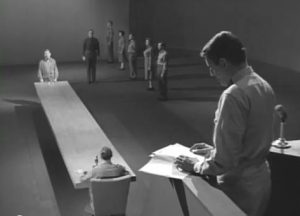 The judgment room is a disturbing place.

“You walk into this room at your own risk, because it leads to the future, not a future that will be but one that might be. This is not a new world, it is simply an extension of what began in the old one. It has patterned itself after every dictator who has ever planted the ripping imprint of a boot on the pages of history since the beginning of time. It has refinements, technological advances, and a more sophisticated approach to the destruction of human freedom. But like every one of the super-states that preceded it, it has one iron rule: logic is an enemy and truth is a menace. This is Mr. Romney Wordsworth, in his last forty-eight hours on Earth. He’s a citizen of the State but will soon have to be eliminated, because he’s built out of flesh and because he has a mind. Mr. Romney Wordsworth, who will draw his last breaths in The Twilight Zone.”

Wordsworth is on trial for being obsolete. His stated profession is that of a librarian, which is not good, as books have been deemed bad by the State. And he believes in God, another transgression, as the State has proven that God does not exist. The Chancellor lambasts Wordsworth, and with the (unnecessary) approval of the jury, he finds the strong-willed man obsolete. 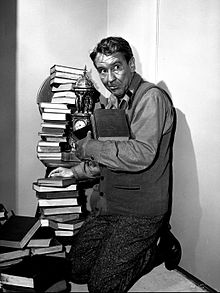 So what does the State do with its obsolete citizens? They are put to death within forty-eight hours in front of a live television audience. Wordsworth chooses midnight as the time for his demise, and he says that he will reveal the manner of his death to the State’s designated Assassin. The Chancellor agrees to this.

“THE LORD IS MY SHEPHERD…”

As the hour approaches, Wordsworth invites the Chancellor to his small apartment. He reveals that his chosen method of execution is a bomb that will go off at midnight, less than an hour from now. Good choice, says the Chancellor, as he does a hasty retreat to the front door. But Wordsworth has locked him in so that the Chancellor can die with him, providing viewers with an even more interesting death.

So will the State rescue one of their own? Or will the Chancellor put on a brave front as the State’s representative? He is left to dwell on this as Wordsworth extracts an illegal Bible from his large collection of books and proceeds to read from Psalm 23.

The Chancellor briefly maintains a calm demeanor, but as midnight approaches he begins to freak. Finally he screams, “In the name of God, let me out!” Wordsworth, satisfied, opens the door, and a few seconds after the Chancellor runs down the stairs, the bomb goes off and kills the obsolete librarian.

“The Lord is my shepherd…”

Back in the judgment room, the Chancellor finds his former place on the high podium taken by another. For his cowardly display and his invocation of God, he too is deemed obsolete. His protests are ignored by the State, and he is sentenced to death.

Rod Serling appears for his closing narration, which is significant, as I’ll explain shortly. This narration was shortened for expediency, but I found the entire statement:

“The chancellor, the late chancellor, was only partly correct. He was obsolete. But so is the State, the entity he worshiped. Any state, entity, or ideology becomes obsolete when it stockpiles the wrong weapons: when it captures territories, but not minds; when it enslaves millions, but convinces nobody. When it is naked, yet puts on armor and calls it faith, while in the Eyes of God it has no faith at all. Any state, any entity, any ideology which fails to recognize the worth, the dignity, the rights of Man…that state is obsolete. A case to be filed under “M” for “Mankind”—in The Twilight Zone.”

In the five years that the original “Twilight Zone” ran—156 episodes—Serling’s closing narration was made off camera, with the exception of two episodes. “The Obsolete Man” was one of them. Clearly, he had something to warn humankind about, something in which he strongly believed. Fifty-eight years later, this episode sadly resonates.

If you’re interested in seeing “The Obsolete Man,” you can find the original “Twilight Zone” on some of the streaming services. (I watch it on Netflix.) It is episode #65 in the overall series, the last episode (#29) of the second season.