The Island: When Science Goes Too Far

As far back as Dr. Frankenstein creating his monster, there are many stories about the gross misuse of science and technology leading to disastrous results. Perhaps Ian Malcolm, the chaos theorist in Jurassic Park, said it best. When addressing John Hammond, whose vision brought cloned dinosaurs to life, he said, “…your scientists were so preoccupied with whether or not they could that they didn’t stop to think if they should.” 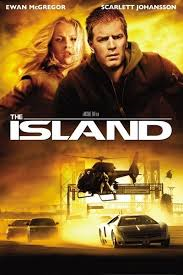 A similar premise drives the 2005 science fiction/thriller, The Island. A few years into the future, Lincoln Six Echo (Ewan McGregor) and Jordan Two Delta (Scarlett Johansson) live in an underground complex with many others. All of them believe that the outside world has suffered The Contamination, leaving it uninhabitable, aside from one island. They are governed by a strict set of rules, enforced by constant monitoring and guys in black suits. (The residents all wear white.) At various times a lottery is held, and the “winner” gets to leave the complex and go to the island.

Lincoln and Jordan are friends—though all interaction is monitored by the Proximity Police. Sex is not allowed. Some women become pregnant through insemination, and they too get to leave for the island just before giving birth.

This has to be painful…

Of late, Lincoln has been having dreams/nightmares about being on a yacht with a beautiful woman, then being pulled into the water and drowned by some shadowy figures. They are not from his own memories. Because even REM sleep is monitored, Lincoln is summoned to the office of Dr. Merrick, who runs the facility. (He’s played by Sean Bean, in his usual über-creepy style.) Seemingly worried about something, he places micro-probes into Lincoln’s body (through his eyes sockets; ee-yew!) for further monitoring.

Although he’s not supposed to, Lincoln visits his friend, James McCord (the always entertaining Steve Buscemi), in the complex’s power facility. While there, he comes across a huge moth, indicating that there still might be life outside the complex. He follows the moth up a ventilation shaft, and on an upper floor he makes a shocking discovery. A pregnant woman that he worked with had been removed the previous day to go to the island. Lincoln watches her deliver the baby, after which this surrogate mother is euthanized, the baby placed into the hands of a grateful yuppie couple. 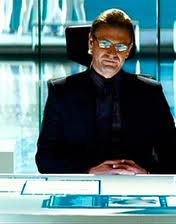 Dr. Merrick: what a creep!

WTF! Lincoln is stunned, even more so when he sees a recent lottery winner in surgery to have his organs harvested, rather than head off to the idyllic island—which of course is a myth. Eventually he will learn the truth: he and the others are clones, created as adults (and pre-programmed with pasts) from the genes of Merrick’s über-rich clients for the purpose of providing body parts as needed, or babies for barren couples. Merrick and his staff refer to the clones as “products” and “insurance policies”. The clients are not aware that their insurance policies are actual people.

Lincoln has little time to assimilate all of this. Seems that Jordan has just “won” the lottery (her sponsor, a supermodel, has been involved in a traffic accident) and is scheduled to “depart for the island.” He gives her the fifteen-second sound bite about the same time Merrick realizes that Lincoln is aware of what’s going on. A frantic chase ensues, and they manage to escape from the facility. They emerge into the Arizona desert, like children emerging into life, both committed to finding their sponsors—who are identical in appearance—and letting them and the world know what is going on at the facility. Merrick calls in an African mercenary (Djimon Hounsou) to hunt them down. 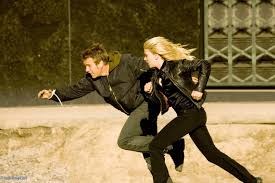 Lincoln and Jordan do a lot of running.

Both sponsors just happen to live in Los Angeles (where else?), so with the help of Lincoln’s friend, McCord, he and Jordan are put on the road to La La Land. The mercenaries murder McCord and blame it on Lincoln and Jordan, which now makes them wanted fugitives.

I’m not going to issue a Spoiler Alert, because I’ll stop here. Believe it or not, what I just detailed takes place early in the film, and there is a lot more to come. With a Michael Bay-directed movie, you can expect plenty of action. But above all that is the ethical issue of cloning—in this case for profit—and also, the question of what constitutes a human being? From beginning to end, Lincoln and Jordan come off as far more human—and humane—as “real” people, and you’ll enjoy rooting for them.

The critics were not as kind as they could have been to The Island. But heck, you know how I feel about that. Enjoy!