The Fly: An Exercise In Barf-Baggery 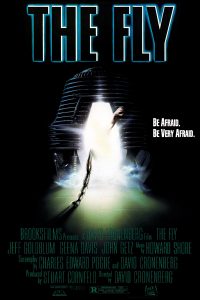 Until recently I had not watched the excellent 1986 remake of The Fly in many years. This is my excuse for forgetting that I should not have viewed the film so close to dinnertime. Appetite gone!

Indeed, by virtue of its Academy Award-winning makeup effects, as well as an outstanding performance by Jeff Goldblum, The Fly resonated with critics and general audiences alike. It scored well at the box office, and to this day it holds a 92% rating on Rotten Tomatoes. Always great to see a horror film received so well.

The original 1958 version of The Fly was just as big a success as the reboot. It too did well at the box office, and it holds a 95% rating on Rotten Tomatoes. The film starred David (Al) Hedison as scientist André Delambre, and Vincent Price as François Delambre, his brother. (Did Vincent Price play in every horror movie ever made up until his death?)

You likely know the premise: André has invented a matter transporter device and has been successful in teleporting small items from one pod to another. When he tests it on himself, a housefly gets into his pod. André re-emerges with the head and the left arm of the fly. After fruitless attempts to capture the fly and reverse the process, André destroys himself with the help of his distraught wife. 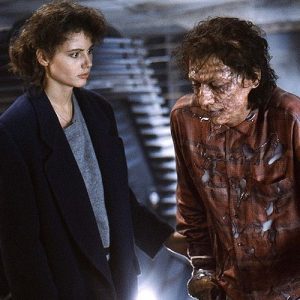 Ronnie wonders if her relationship with Seth will work out…

A scene near the film’s end is among the most memorable in all of horror filmdom. François and a police detective spot the fly with André’s head and arm trapped in a spider’s web. In a chilling, high-pitched voice it cries out “Help me, help meee!” as the spider approaches. The cop crushes both insects with a rock.

Yes, that oft-used line came from the 1986 remake of The Fly. Here is a brief overview. Eccentric scientist Seth Brundle (Goldblum) shows science journalist Ronnie Quaife (Geena Davis) his new invention: a teleportation device, and offers her exclusive rights to the story in exchange for her silence until it is perfected. She thinks he’s whacko—until he transports her nylon stocking from one pod to the other.

A relationship ensues as Seth progresses to the point of teleporting a living creature: a baboon. Barf bag moment number one: the creature reanimates inside-out.

But Seth persists, and soon another baboon comes out of the second pod all happy and healthy. Although he wants to try it out on himself, Ronnie urges him to caution. But does he listen? Of course not. He climbs into the transmitter pod, along with an unseen housefly. When he reanimates, everything seems normal…but we know better. 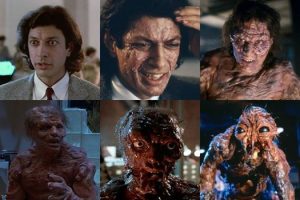 The various stages of “Brundlefly.”

Herein lies the major difference between the 1958 and 1986 versions. Where André and the fly swapped heads and arms, Seth Brundle and his fly were fused together at the molecular-genetic level. You can see Seth’s deterioration in the progression of photos, as he evolves into an entity called “Brundlefly.” Needless to say, all of it wreaks havoc with his and Ronnie’s relationship, especially after she learns that she is pregnant with his…what?

Barf bag moments come fast and furious now as body parts fall off Seth like petals off a wilting flower. And just as a fly does, Seth vomits up digestive enzymes to help dissolve his food. I did mention that I lost my appetite, did I not?

Still, despite all of these remarkable effects—or maybe because of them—The Fly was a major success, in part because of its tragic love story. To this day it appears on many Top 100 lists. Some critics saw it as a metaphor for the AIDS epidemic, though its director, David Cronenberg, stated that he viewed it more as an analogy for diseases in general, and for the aging process. 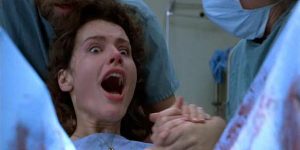 Whatever the case, Jeff Goldblum’s incredible performance was Oscar-worthy, though of course he was not even nominated. This really pissed off Gene Siskel, the renowned film critic stating that Goldblum was “stiffed” by older Academy voters who did not acknowledge horror films. I would have to agree.