The Dragon That Ate Alaska 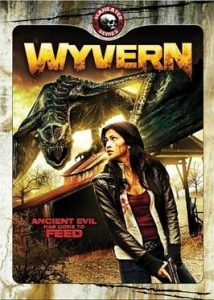 Okay, I’m embellishing here. But in the 2009 creature feature, Wyvern, a mythical dragon chows down on the quirky residents of a small town in northern Alaska in order to feed itself, as well as to bring some tasty morsels to its soon-to-be-hatched young.

I suppose this film could have been written up as a Guilty Pleasure, but it really didn’t have any reviews to speak of—my first benchmark. And being that it was made for television, any box office is moot. The film is one of many in the SyFy Channel’s “Maneater” series. I’ve seen at least a half dozen of them, and I have to say that Wyvern is a few notches above “cheesy,” a word that describes most of these movies.

ANCIENT EVIL HAS COME TO FEED

With that tagline, here is a brief overview of Wyvern. The town of Beaver Mills, up near the Arctic Circle, has not seen a sunset for six months. But with the summer solstice upon them, the residents are about to celebrate the beginning of the end to the “midnight sun.” Little do they know that a wyvern has just emerged from a melting glacier, and the beastie is quite hungry. It works its way toward the unsuspecting town, chowing down on a few folks along the way. It even takes the time to build a crude nest and lay three eggs. 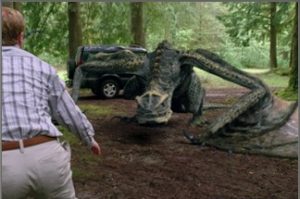 The town doctor is going to miss his next appointment.

The film’s humor comes from its goofy residents, though the two main characters, handyman Jake and waitress Claire, are sort of normal. With regard to Beaver Mills, think Cicely, the town in the popular TV series, Northern Exposure. In fact, the actors who played rich guy Maurice Minnifield and receptionist Marilyn Whirlwind appear in Wyvern. I’m sure that was deliberate.

Of all the quirky folks in Beaver Mills, an elderly lady named Edna may top the list. A member of the town council, Edna holds a weekly meeting at Claire’s café with her best friend—who died a year earlier. The other townsfolk do not find this unusual.

The townsfolk are stunned to see what they’re up against.

Anyway, the dragon will soon make an uninvited appearance at the solstice celebration, and Beaver Mills will never be the same. Will Jake and Claire, with the help of some other residents, be able to thwart the designs of the mythical beastie? Well, what do you think?

I was pleased to see that the “humans-versus-dragon” confrontation scenes were not played for laughs. While Wyvern has its share of humor, it is not a comedy. If you enjoy creature features, give it a try. I found it on Prime Video, free with a subscription.