THE CHANGELING: Horror At Its Best 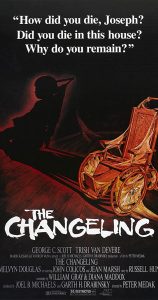 The 1980 Canadian-produced psychological horror film, The Changeling, offers little violence. And forget about buckets of blood—there is maybe a thimble full. That said, it is truly one of the most chilling tales ever told. Case in point: given its age, I’ve watched it countless times, though until recently I’d not viewed it in years. When I did, many of the scenes still creeped the hell out of me.

This award-winning film (eight Genie Awards—Canada’s Oscars—including Best Picture) definitely benefited from the star power of the great George C. Scott, as well as a solid supporting cast that including veteran actor Melvyn Douglas and Trish Van Devere—Scott’s real-life bride. But it is the story—supposedly based on true incidents—that kept viewers enthralled.

Given all the many twists and turns in The Changeling, all the OMG and WTF moments, it would be unfair to offer a detailed synopsis of the story. Instead, here is a brief overview of the early scenes. Renowned classical composer John Russell (Scott) is on a vacation with his wife and daughter when they are both killed in a traffic accident. A few months later the despondent John moves from New York City to Seattle, where he is shown an isolated house by Claire Norman (Van Devere), an agent of the historical society, who befriends him. 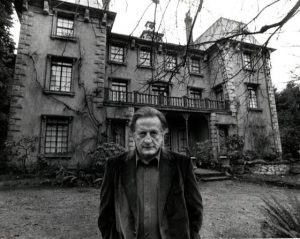 Did I say house? A large neon sign on the front of it says, BIG FREAKING SCARY HAUNTED HOUSE! (Okay, I’m kidding, but it might as well be true.) The house has about 746 rooms and 43 floors. (Kidding again, but it is LARGE.) Perfect for composing, John says, and he moves in. So what if the head of the historical society says that the house should not have been rented, that “It doesn’t want people.” Uh-oh.

Weird happenings begin with what sounds like loud banging on the pipes. Soon all of the water taps turn on, and when John investigates in a bathroom on one of the upper floors, he sees the apparition of a young, frail boy drowning in the tub. 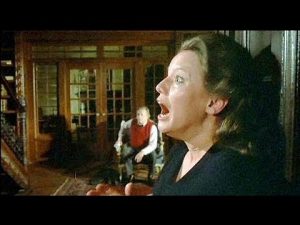 Claire is not too thrilled about the house.

Another incident leads John to a closet on the top floor, where he discovers a hidden attic bedroom containing a child-sized wheelchair. He also finds a dusty old music box that plays a catchy melody—the same melody, note for note, as one that he thought he’d composed days earlier.

John and Claire hold a séance, during which the medium makes contact with a spirit named Joseph Carmichael—which happens to be the same name as an elderly U.S. senator, a gazillionaire (Douglas). John’s high-tech audio equipment records the spirit’s voice, which they did not hear during the séance. The spirit reveals the shocking secret of what happened to Joseph in that house decades earlier, and it pleads with John for his help in righting the wrong.

As promised, this is just an overview of the earliest scenes. The revelation sends John and Claire off on a bizarre—and sometimes dangerous—journey as they seek to help the tormented spirit find peace. 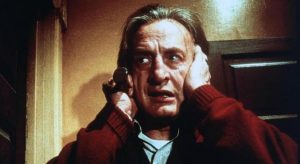 “Who’s banging on the damn pipes?”

I will, however, describe one scene that still knocks my socks off to this day. Over the years I have taught a variation of a workshop titled, “Horrors—Or how to Scare the Yell Out of People.” Emphasizing subtle horror, I show attendees a scene from The Changeling involving a rubber ball that belonged to John’s beloved daughter. He keeps the ball in a box of mementos. One evening he hears a noise, and when he looks up the staircase, he sees the ball bouncing down. Creepy enough, no? He drives to a bridge and throws the ball into the water below, then goes home. Once inside he hears the same noise and is horrified to see the ball bouncing down—AGAIN. Weirds me out just thinking 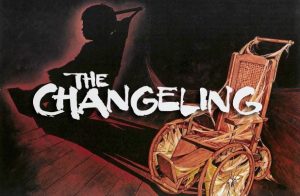 about it. And there are many scenes like it in this “classic” haunted house story.