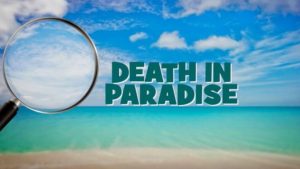 Over the past decade the British/French “mystery/comedy/suspense” series, Death in Paradise, has been one of the highest rated shows going, especially in England. My bride and I just finished binging on the first nine seasons (72 hour-long episodes on BritBox) and are eagerly awaiting season ten, which is currently being aired across the pond. We’re also excited to learn that the series has just been renewed for seasons eleven and twelve.

So why is this series so popular? Let’s start with the tropical setting. Nearly all of the episodes take place on the (fictional) Eastern Caribbean island of Saint Marie, near the real island of Guadeloupe—where the show is actually filmed. The natives are pretty laid back, and they always seem to be celebrating something. The rum flows freely as they party and dance in the streets. 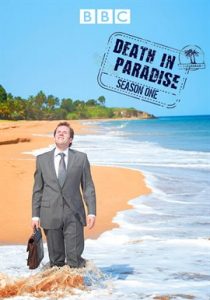 DI Richard Poole is not exactly dressed for paradise.

All of the episodes open with a murder, occasionally the death of a local, but mostly the corpse belongs to a tourist, a visiting businessperson, a boater who has pulled into port, or someone else just passing through.

Saint Marie’s main town is called Honoré, and when a body shows up it is the Honoré Police Dept. doing the investigating. The force consists of one DI (Detective Inspector), a DS (Detective Sergeant), and two officers. The DIs, all from England, are usually not there by choice, although the beauty of the island, and its friendly people—the murderers notwithstanding—wins them over.

All four of the show’s DIs are also quirky. DI Richard Poole wears a suit and tie throughout his 2+ seasons, despite the oppressive heat and humidity. He’s also socially inept. His successor, Humphrey Goodman, is clumsy but good-natured. His is the longest tenure on the show. (And our favorite.) After his return to England we meet Jack Mooney, also good-natured but not shy about getting in the face of a recalcitrant suspect. And finally the quirkiest of all, Neville Parker, a hypochondriac with just about every allergy there is, especially to sunshine and mosquitos, all of which abound on Saint Marie. During a month-long quarantine on the island, which he hates, he solves a few murders and comes to enjoy his team. Decision made at the end of season nine: he’ll stay. 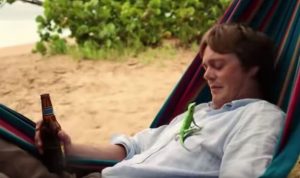 DI Humphrey Goodman shares a moment with Harry the lizard.

Whatever their idiosyncrasies, all four DIs are brilliant when it comes to solving the murders. The show’s format is reminiscent of Agatha Christie, Ellery Queen, and other mystery writers. With about ten minutes left in each episode the DI, to that point baffled by the case, has an OMG revelation and tells his team to “gather the suspects.” He then names the killer and details how the murder was done, which we see in flashback. The episode usually ends with the team hoisting beer and rum at Katherine’s Bar/Restaurant.

Humor abounds in Death in Paradise, and one source is my favorite non-human character: a Guadeloupian Anole lizard named Harry—in CGI, of course. Each DI is assigned a “rustic” bungalow on the beach as living quarters (a tree grows in the middle of it), and Harry is a permanent resident. DI Richard Poole, uptight as he is, names the lizard after Prince Harry, and all of the DIs interact with it. 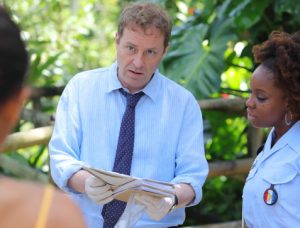 DI Jack Mooney is on the case.

Who said murder couldn’t be fun? Death in Paradise is one of the most entertaining shows we’ve come across during our many months in the quarantine cave. Check it out—if you haven’t already.